Austerity is based not only on bad economics, but lies as well. As Richard Murphy demonstrates in this article Britain’s debt burden is not nearly as great as the government claims, which is its principal argument for even more austerity. Almost one quarter of the UK’s debt does not exist, as these are governments bonds that the Bank of England has purchased as part of its quantative easing programme. The Bank of England belongs to the British Treasury. When you buy back your own debt, it is no longer debt. Thus Britain’s government debt as a percentage of GDP is in reality no higher than Germany’s. Fancy that.

This suggestion that the UK government’s debt is £1.3 trillion contrasts dramatically with the Treasury view of debt, which is reflected in this data, issued recently, and which is what the media usually report in their desire to suggest that the UK economy is being crushed by a government debt mountain that is apparently unsustainable and a burden on generations to come: 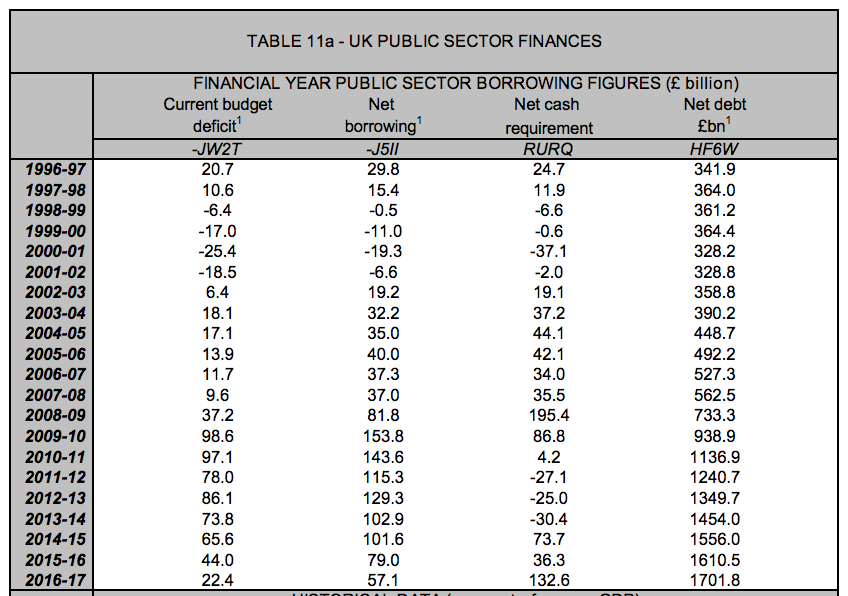 It is now some years since I suggested that UK government debt data was mis-stated because of the impact of QE, which is the data that reconciles the above two positions. I said in 2012:

The reality is … that in any proper accounting system that produced a single set of accounts for the government that debt that was repurchased [by the Bank of England under the QE programme] would be considered to be cancelled. That’s because you can’t meaningfully owe yourself money, and yet that is precisely what is happening here. The Treasury owes the Bank of England money but as it in effect owns the Bank of England it therefore owes itself the money and as such the debt has simply been cancelled.

What the National Audit Office is now doing is recognising the truth of what I said back then. Or as I put it at that time ( and I have edited slightly):

QE hides an economic reality, which is that when all the mumbo jumbo is cleared away what is happening is that money is being printed under the QE programme to clear the government’s deficit and that much of the claimed increase in debt is not really being issued at all.

That is precisely what the NAO is now recognising. The UK is not nearly as much in debt as HM Treasury claims precisely because it cannot owe itself money.

That has ramifications. First, it means the whole debt paranoia is wrong. Debt is not rising at the level claimed by the government. This is apparent from this comparison: 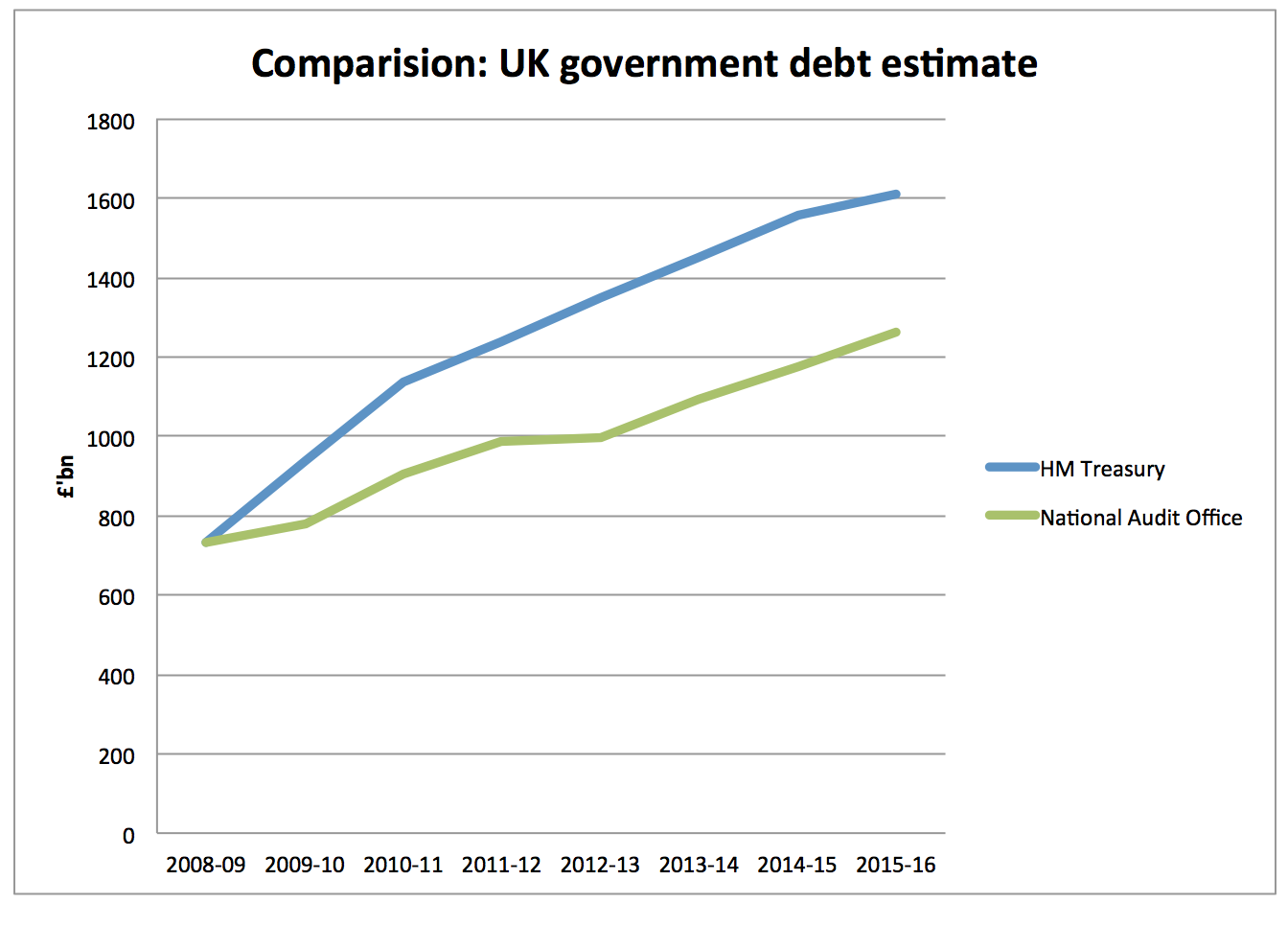 This is even more apparent when expressed as a percentage of GDP: 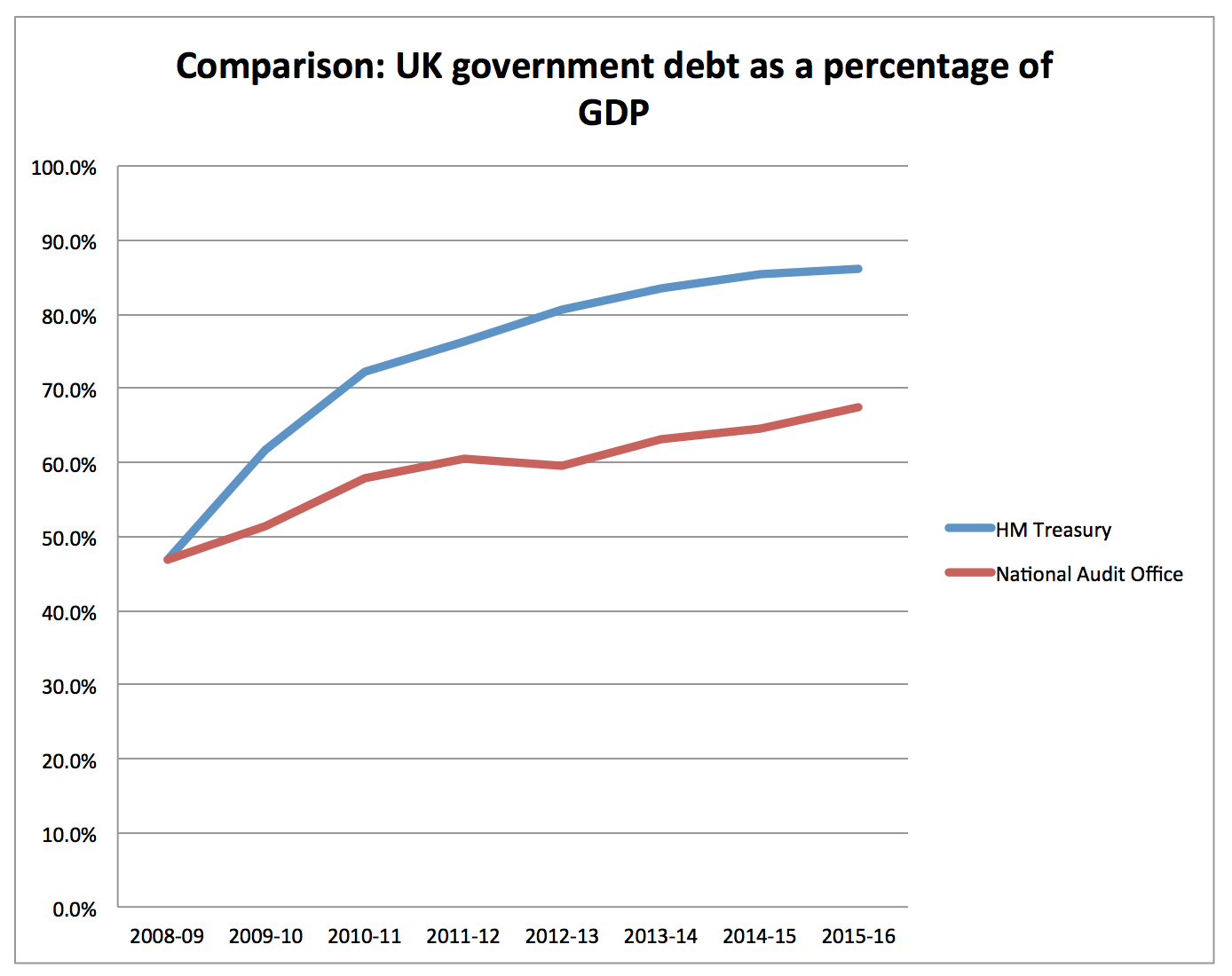 Debt has grown, but by nothing like the amounts the government claims.

Secondly, this then means that the  focus can then move instead towards how to use debt more creatively to solve the issues that we as a country face. As organisations as diverse as the IMF, OECD, CBI and left wing think tanks all say, now is the time for infrastructure investment, especially when (as is the case at present) money is available to the government at negative interest rates.

We do not have a debt crisis.

We do not need austerity.

We do need social housing, new green infrastructure in every constituency of the UK, better local transport, investment in small and medium sized business that banks are not delivering and and end to PFI. All this is possible. And we are in no way constrained by debt from delivering any of these things.

John Weeks is Professor Emeritus of Economics, SOAS University of London, & editor for Progressive Economist Group. Cross-posted from Prime Economics   What Crisis? For the last several years the media have carried reports […]

What are the intentions behind Russia’s March 2022 Presential Decree requiring gas importers to settle gas payments in rubles? Michele Savini Zangrandi is an economist at the Bank of Italy Cross-posted from Vox EU In […]

Branko Milanović – The rule of nihilists

A very insightful article into the thinking of Xi Jinping and the developments in the Soviet Union and afterwards. Branko Milanović is an economist specialised in development and inequality. His newest  book is “Capitalism, Alone: […]