The EU political elite simply cannot shake off its subservience to financial corporations, as Carl Bildt’s tweet once again proves. Democracy plays no role in his vision for Europe. There will have to eventually be a battle for what sort of Europe we want and let us hope it will not be that being propagated by the current EU leaders. 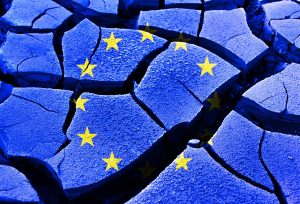 Carl Bildt is the co-chair of the  European Council on Foreign Relations. He posted this on Twitter just now: 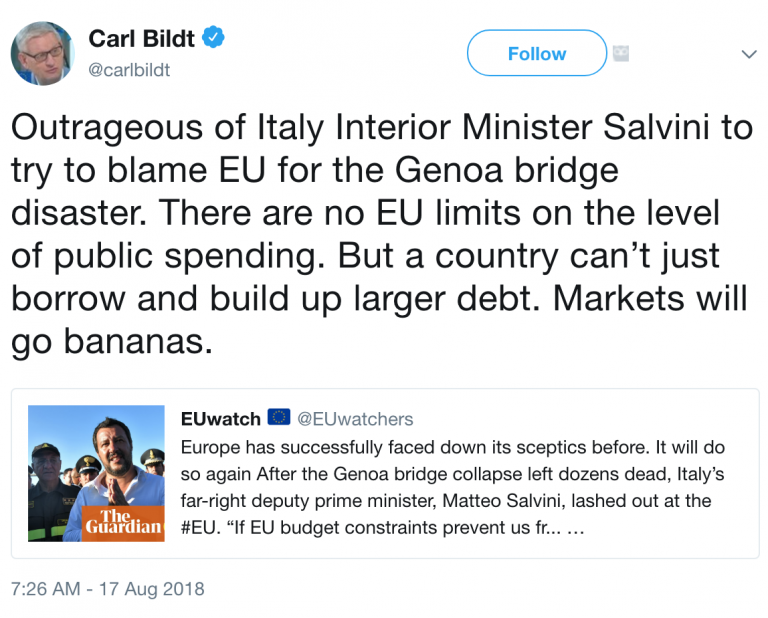 There is an element of truth to what Bildt says. The EU  does not direct how a government may spend their funds. Nor does it set a limit on public spending.  What it does set is a limit on deficit spending. But then, Bildt makes that point too, and in a  most uncomfortable fashion. What he says is that there is no democratic control, per se, over what governments might spend because that is set by markets who go ‘bananas’  if they want to borrow to do so.

The far-rights exploitation of the Genoese bridge disaster is unacceptable. So too,  I have to add is Carl Bildt’s.

The constraint on infrastructure spending within an economy is not the money markets’ to prescribe. The constraint is the ability of that economy to find the physical and human resources required to undertake that spending. If that physical and human capacity to undertake the work exists then it is not just reckless, but it is grossly irresponsible, not to undertake infrastructure projects that secure the future well-being of a country.

A company that said it wanted to invest to provide secure future income streams would be the darling of the market, money would pour its way. Apparently, however,  when a government wishes to do the same thing it is grossly irresponsible under market censure it.

The truth is that this is absurd. Governments are the best bet when it comes to investment security that there is. And if you want to imagine how good the economy is going to be when the road system has fallen apart, dream on.

So, markets should not be a constraint.

And if the physical capacity to make infrastructure that is for the benefit of society exists – and I think it does because all the standard macroeconomic assumptions on the levels of unemployment the both really exist, and which create inflation in the economy, are being proved wrong, almost daily –  then either  markets have to get their heads around the fact that this is a good thing, and so governments are going to do it, or governments have to get their heads around the fact that markets are a bad thing, and they are going to have to ignore them by using what I  originally called green infrastructure quantitative easing  and which Jeremy Corbyn called People’s QE.

This is a battlefront. Let’s make no mistake about it. The spivs (I use the word with care)  in the financial markets whose only concern is with short-term gain  maybe wholly indifferent to the creation of long-term viability within our economies, which  will require the replacement of large quantities of  existing infrastructure with newer, safer, greener and more sustainable assets,  but the rest of us have to take this need seriously. There may well be a time when we have to realise that doing so might require us to substitute current consumption for the investment activity that this will require: so be it. But again, the constraint is not money: the constraint is the physical allocation of resources. And we cannot let the belief that markets can dictate prevent us from having the future that we need if our economies, our environment, and our children’s world are to be viable.

And let Carl Bildt be the loser.

Why economic nationalism is suddenly a fashionable excuse for countries to decrease their reliance on the existing global supply chains. Marshall Auerback is a market analyst and commentator Jan Ritch-Frel is the executive director of […]

Richard Murphy: The government does not spend taxpayers’ money: that clears the government’s debt to the Bank of England

Richard Murphy explains that taxes do not finance govenment spending, but helps to pay down debts. A government creates it own funds or borrows money when it needs it. The idea that a government cannot […]

Thomas Palley – Ukraine: what will be done and what should be done?

In the din and lies of mainstream media it is difficult to find analyses of this quality. Thomas Palley is an American economist who has served as the chief economist for the United States-China Economic […]