As Richard Murphy writes, the EU has stipulated new “draconian” guidelines to end tax avoidance through tax havens. The question is, will these guidelines be enforced?

I have, for more than a decade, had an interesting relationship with the British Crown Dependencies  of Jersey, Guernsey and the Isle of Man.  From 2005 onwards  I ran a campaign pointing out that none of them could comply with the requirements of the European Union’s EU Code of Conduct on Business Taxation.  I was right: they couldn’t and by 2010 all of them had been told to reform their tax systems to meet the EU’s requirements.  Whether or not that would have happened without me, I do not know.  I do know it made be deeply unpopular in those places.

What I also know is that they became compliant by 2011 by doing two things that the EU never expected.  The first,  with the pace being set by the Isle of Man, was to create what was, in effect, a 0% corporation tax regime for all companies located in the islands ( some tiny exceptions apart).  The Isle of Man could afford to do this at the time because it was still receiving massive subsidies from the UK on its revenue sharing agreement with regard to VAT: something that I took on from 2007, and which was largely removed by 2012 as a consequence, although it is now (unfortunately) seemingly reappeared.

The second thing  the islands did was to, in the face of EU pressure, remove all arrangements that forced locally owned companies to pay tax when internationally owned ones did not have to do so.  This was immensely costly:  the result has been Jersey’s ongoing budget difficulties ever since,  on which issue  I’ve also had quite a lot to say over the last decade  or so.

As  I have already noted today, there is much to regret about the EU’s new tax haven blacklist.  That is, however, one exception, which is paragraph 2.2,  which says:

The explanatory note to this listing says:

Given that by 2012 Jersey, Guernsey and the Isle of Man had all received clearance from the EU Code of Conduct Group  that their tax systems were compliant with its requirements it is a little hard to see how paragraph 2.1 can now be used against these locations.   However, paragraph 2.2 is another issue. What it opens up is a new ‘soft’  test, by which I mean that the EU Code of Conduct Group has  given itself the right to decide whether, on a broader construction which  no doubt considers both outcomes as well as legislation,  these places are putting into place regimes that do encourage artificial relocation of profits.

I confirm that they do just that. As I noted recently,  corporate profits make up 67% of the GDP of the Isle of Man.   For comparison, they make up 21% of the profit of the United Kingdom,  which might reasonably be used as a benchmark.  Jersey and Guernsey are similarly abusive, and no doubt Cayman and Bermuda  are likewise.  Therefore, as a matter of fact, the  EU Code of Conduct Group test is failed by each of them:  they do provide facilities that do encourage the artificial relocation of profits  without  the economic substance  of the related transactions that give rise to that profit being located in the islands.

The  Code of Conduct Group has, then, set up a test which these islands do, as a matter of fact, fail.  And the reason why they fail is inherent in the tax system that they put in place by 2012 to get round the original requirements that the Code of Conduct Group  expected them to comply with in 1997.  Way back then that Group  made clear that differential tax rates to  encourage the artificial relocation of profits were not acceptable.  What they presumed would happen  was that there would be a levelling up of rates: they did not expect the levelling down that actually took place.  But what they are now clearly indicating is that the continuing abuse justifies further action.

So what does this mean for the Crown Dependencies,  in particular?  I would suggest  that a total reform of the corporation tax systems has to be on the cards.  Firstly, they will be expected to have a corporation tax.  Second,  this tax will be expected to be set at a rate that does not encourage the relocation of profits.  Third, as a benchmark for what that rate might be I strongly suspect that the Code of Conduct Group will look at comparable income tax rates on the island,  which are 20% in each case.  Anything significantly different from this will, I suspect, require some tortuous explanation.

What happens if  the Crown Dependencies do not respond? Then the EU is making clear that it expects member states to put what it calls ‘defensive measures’  in place. These are: 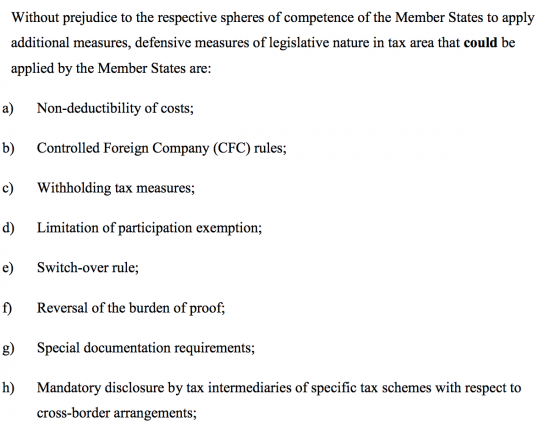 In other words,  any EU country will be encouraged to disallow payments made to these places for tax purposes within their own tax regime or, even more powerfully, will be encouraged to have tax withheld from payments of interest, dividends, royalties and other such payments to the Crown Dependencies, utterly neutering their so-called status as ‘tax neutral international  financial centres’  by ensuring that all monies they receive have been taxed before getting there.

Now I am not counting my chickens as yet. First of all,  the UK is leaving the EU  and so these conditions will not apply to payments made from whatever is left of the United Kingdom. Second,  not every EU member state may apply these sanctions.  But, what is clear is that the pressure is very real,  and that the sanctions are tough.

I am not optimistic enough to say that this is the end of these British tax havens;  they are adept at wriggling out of these situations.  What I do, however, like is the form of wording chosen; the fact that the test is defined in such a way that they inevitably fail it; and that the potential sanctions are significant.  Whatever other impacts  the EU tax haven blacklist might have, for  Jersey, Guernsey,  the Isle of Man, the Cayman Islands and, no doubt in due course,  the British Virgin Islands,  the sanctions are draconian,  and I warmly welcome them for precisely that reason.

Interview with the Catalan rapper and poet Pablo Hasél about artistic repression in Spain Toni Strubell  is a former MP in the Catalan Parliament, journalist, and author of What Catalans Want Núria Bassa Camps is […]

Tory-supporting media, unchallenged by a supposedly liberal press, portray Corbyn as a Soviet fellow-traveller, while unnoticed the shadow chancellor sets out a vision which breaks with the bureaucratic model of 1945. Cross-posted from Open Democracy […]

Paul Mason – Labour must become the party of people who want to change the world, not just Britain

‘Networked individuals’ have replaced the industrial working class as the key agent for overhauling capitalism in the digital age. To win power, Labour must represent their values, culture, aspirations and political priorities. Paul Mason is a […]