Richard Murphy has published over 400 articles concerning the Green New Deal. We shall continue to post them on BRAVE NEW EUROPE until we finally have one – worldwide. 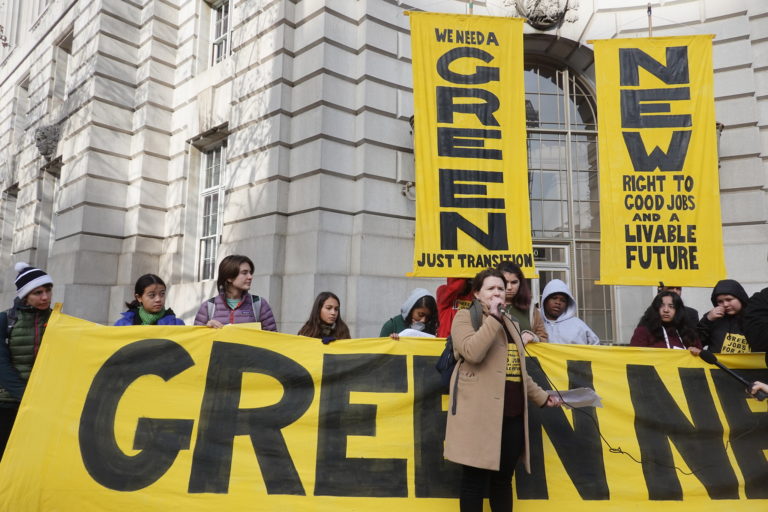 The Green New Deal recognises that we live in a world of massive insecurity. The UK’s neoliberal economic model has over the last forty years reduced the security of employment, young people, savings, pensioners, the vulnerable, those needing access to housing and so much more. What we now also know is that the economic model that created this insecurity has also been harming our planet. Almost everyone now agrees that the climate science argument is settled: global heating is our fault. As a result, we have to beat human-created global warning unless we want to become extinct. The consequence of neoliberalism is, then twofold: we must build a new society in which we can both survive and prosper within the constraints our planet imposes. We are nowhere near this position now.

The Green New Deal, in almost every iteration I have seen, is a variation on the plan produced by the London-based Green New Deal Group that first reported in July 2008, shortly before the crash of Lehman Brothers and the onset of the Global Financial Crisis. Those objectives might be summarised, in my view, as seeking to provide:

How will we do this?

The Green New Deal has an ambitious programme to achieve these aims. It will, for example, seek to transform the UK’s 30 million buildings so that they are all energy efficient by 2030, creating hundreds of thousands of jobs on the way right across the UK. It will also supply the training and support services that this will require. In the process it will turn as many of those buildings as possible into power stations by fitting solar panels and other generating capacity, and it will fund the building of the new social housing required to end our housing crisis whilst investing in renewable energy of all sorts, on and offshore, that will guarantee that they can be net-zero, carbon neutral.

The Green New Deal will also fund significant investment in local public transport, with an emphasis on reducing dependency on fossil fueled cars. Investment in research and development that will seek to address the problems of a green transition for freight, sea and air transport will also take place. And whilst all this is happening business will be required to transform itself to become zero net carbon: the Green New Deal and its associated National Investment Bank will help provide the capital to assist business to do that if they cannot find it themselves.

Throughout this the Green New Deal will seek to provide security for people’s jobs and long-term prospects, as well as providing secure opportunities for their savings, which will be used to fund this innovation at better rates of return than most savers enjoy now. As a result, the Green New Deal will also deliver pensions that will work.

How much will this cost?

Current best estimates suggest that the Green New Deal will in itself cost at least £50 billion a year. On top of that requiring that businesses be net-zero carbon – as it is going to have to be – will create additional costs and that business will need help to fund this transition. The need may then be for £100 billion a year of investment for at least a decade.

This sum does, however, need to be put in context. £100 billion is just 5% of the UK’s annual income, which is a small price to pay for a secure future. And in addition, it is only about 8% – or less than a twelfth – of total UK private wealth. It is easy to get carried away with thinking that programmes costing multiple billions of pounds are unaffordable. In the case of the Green New Deal there is, firstly, no option but invest if we are to survive. And second, the sums involved are completely affordable.

How do we pay for this?

It is very likely that the transition that the Green New Deal requires can be paid for without increasing taxes, at all. That is because the tax reliefs that direct the way that the wealth of the UK is saved should instead be used to redirect funds to the Green New Deal.

In addition, about £70 billion is saved in Individual Savings Accounts (ISAs) each year. If ISA tax relief was dependent on these funds being invested in the Green New Deal in future through GND related gilts and other bonds of the types noted below, with a government guaranteed rate of 1.5% on all bonds issued by government related or backed institutions, it might be that all this money would be available to the Green New Deal.

In that case these two sources of funds should, by themselves, fund the whole cost of the Green New Deal. It is important to add though that all this new economic activity undertaken by people in secure and well paid employments would create significant additional tax revenues that would help pay for a lot of the Green New Deal as well, or other measures to relieve the impact of austerity. In that case it is likely that the suggested funding is more than adequate to fund the whole Green New Deal programme.

What are Green New Deal Investments?

Green New Deal investments that ISAs and pension funds might invest in will take the form of a whole range of products, including:

Providing both liquidity and security to Green New Deal investments

At present the UK has what is called a Financial Services Compensation Scheme. This means that anyone who has up to £85,000 in a bank deposit account is guaranteed to be repaid by the government if that bank fails. Everyone involved knows the value of a government backstop guarantee for their savings.

The Green New Deal should, it is suggested, involve a similarly guarantee. Every single Green New Deal approved bond or deposit or loan (but not shares, if ever these were approved) of the types noted above should be backed up by the government to the same limit as that supplied by the Financial Services Compensation Scheme.

This guarantee is easy to arrange, and finance. The government can offer such a guarantee because unlike anyone else a government can create the money needed to back up its promises, which is precisely what it did when over the last ten years it effectively supplied £435 billion of funding to UK banks and other financial institutions through its quantitative easing (QE) programme, which funding backed up their solvency. Replicating this guarantee scheme for the Green New Deal is, it is suggested, the proper use for what has become known as Green QE. What Green QE guarantees is that the money to deliver the Green New Deal will always be secure and that liquid markets for Green New Deal investments will exist. In that case it is more than likely that enough funds to finance the Green New Deal will be invested without there ever being need to resort to this guarantee: the promise will be enough in itself to mean it will never be called upon.

How does business play a part on the Green New Deal?

It seems obvious, but is rarely said, that Green New Deal has to involve everyone, including all businesses. To make sure business is fully involved in the Green New Deal accounting rules need fundamental revision. What should be required is that all large businesses (to start with, at least) should:

In some cases, this will show that the business cannot fund that transition based on currently identifiable sources of capital.

Sometimes it will be apparent that this is because in the long term that business cannot survive: it’s doing something that we can no longer permit if life is to continue here on earth.

In other cases what will be required is new capital: if the case for survival can be made then the National Investment Bank should be there to help: using its resources it should provide the support to ensure that these businesses, and the jobs of those who work in them, will make it to the new world that we must live in.

But for those businesses that cannot make the transition then a new form of insolvency will have to be created. For obvious reasons it should be called ‘carbon insolvency’. This will require the orderly winding up of the affairs of the companies involved, and the investment of new funds to assist those whose jobs will be impacted. The National Investment Bank will be the source of this funding. The Green New Deal is all about job creation: it will invest to ensure that promise is fulfilled.

And, it should be said, for those businesses that look like they can prosper with zero net carbon emissions, then the future will look very good indeed.

What the suggested form of accounting will do, then, is exactly what accounting should always provide, which is the indication that society needs as to whom to trust with its capital. That is precisely why accounting will play a key part in the Green New Deal process.

The result is that the Green New Deal will deliver the security we need:

It has long been my belief that the Green New Deal is the way to secure the world we need to live in. Now is the time to prove it.

Chris Bambery – Brexit: “You can check out any time you like, But you can never leave!”

Chris Bambery takes a very big step back and analyses what Brexit is really about and what opportunites it offers. Chris Bambery is author and broadcaster. Co-author (with George Kerevan) of Catalonia Reborn: How Catalonia […]

The Green New Deal for Europe envisions a fairer, greener and more just continent, which stands together to confront our political, economic and climate crises. Our proposal would transform European economies through investments in modern, […]

Positive Money Europe – Corona Crisis: The ECB has a new Bazooka, but still no Magic Bullets

The ECB launched a massive 750 billion euro plan to cope with the Coronavirus crisis. But these measures will only work if national governments spend as much as is necessary and outline an ambitious plan […]