This is a follow up on Richard’s article concerning the perniciousness of advertising and climate change, which you can read here 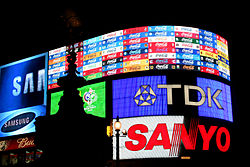 David Willets is a commentator on this blog. He posted this in response to my post on advertising:

I am not asking facetiously, as I’d also like to see an end to marketing and advertising. My question is about what happens as consumption falls. For instance, if everyone, on average, reduced their spending by 50%, each business would have 50% less income, which would mean, with the current economic model, mass unemployment. I don’t imagine people would be willing to pay twice as much to keep said businesses running, and neither would said businesses be likely to keep the same number of people employed to do half the work. My question is, how do we avoid the abject poverty that would ensue for many because there were no longer jobs making, transporting or selling all the stuff we need to stop buying?

I posted this in response:

This has never happened, and it won’t again.

We eliminated coal in the U.K., rail as a means of goods transport, the typing pool, and so much else. And then? Those people (not all, but most) found other work.

The world did not end. We simply found other things to do.

What will we do? Care more. Educate more. Entertain more. And yes, have more leisure.

Is that economically possible? Of course it is. Once needs are met – and if we act now they can be still – then what we do beyond need is our choice.

Consumer society has taken that away.

We can have it back.

But we have to believe that owning what is good is not necessary. Sharing it might be.

Greening the planet is not that hard. It can still be done. Persuading people that our need is to co-habit with each other rather than to fight each other to prove our status – that is the hard bit of this process.

But if we do that there is only one limit to the amount of good we can do – and that is the collective hours in the week.

How will we pay? As now, we will use money.

Where does value come from? From the quality of what is provided.

Will there be markets in this? Of course, just as there are now for entertainment, for example. But let’s also be honest, there will be more done by the government, I suspect. More, but also I am quite sure, not all.

How does the government fund this? By creating the necessary money, of course.

How does it control the money supply to prevent inflation? Through tax, as ever. Much of that will need to be progressive. But what is excess wealth for in a world where the apparent ability to consume has been shown to be the most anti-social action possible?

What’s the constraint on this? Only our willingness to innovate.

And I believe we will innovate.

I am certain the world will not look as it does now.

And that’s the key message to David: the assumption implicit in the question is that the way we live now is the answer to the question as to how to meet need. It isn’t. It does not work. We are killing people alive now if we carry on as we are.

What we need is the faith to realise that we humans can innovate our way out of this. Not by working to keep things as they are. But to make them as they should be.

“Why Not Default? The Political Economy of Sovereign Debt” by Jerome Roos

In Why Not Default? The Political Economy of Sovereign Debt, Jerome Roos explores why sovereign defaults have been an undesirable last option by systemically unpacking the structural characteristics of the contemporary debt market. This is a fresh and […]

This is a decade that could well decide the future of our planet.  The Climate Crisis is being ignored, given lip service and not even half-hearted responses. After so many climate emergencies being declared, why […]