The Fifa men’s World Cup 2022 in Qatar is arguably the most political in history. 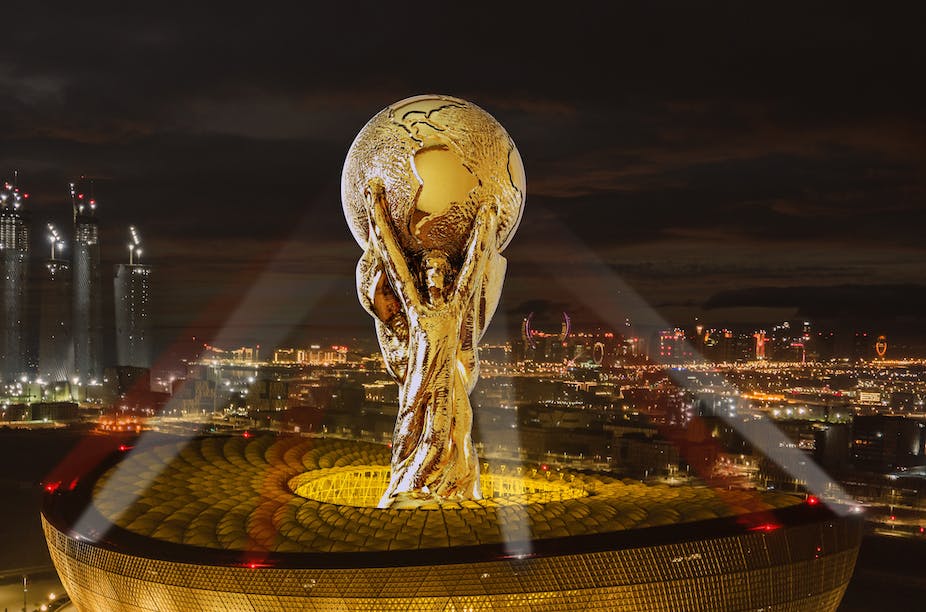 Even during the seemingly innocuous performance of South Korean pop star Jung Kook at the tournament’s opening ceremony, geopolitics were centre stage. For Kook, 25, is not just a good looking young man with a global fan base and a multi-million dollar fortune. In addition, he has a lucrative endorsement deal with the South Korean car maker Hyundai-Kia, which also happens to be a major Fifa sponsor.

This kind of relationship is neither an accident nor a simple business arrangement. For years, the South Korean government has been pursuing a strategy aimed at building and projecting “soft power”, developing its engagement with target audiences around the world. This has happened not just through football, music and cars, but also through Oscar winning films like Parasite and the massively popular TV series Squid Games.

And it’s not just South Korea taking advantage of the audiences that Fifa can provide. For while sellers of soft drinks and burgers are still part of the sponsorship roster, Fifa’s key partners are increasingly big corporations from countries keen to benefit from the global reach of football.

State-owned Qatar Airways for example, is busy selling plane tickets as Fifa’s official airline partner, but also plays a pivotal role in attempts by the Qatari government to establish Hamad International Airport as a major hub of global travel.

The award winning airline is an effective instrument of soft power, transmitting signals to global audiences about what Qatar is and what it aspires to be. In turn, the airline, and the very act of hosting the 2022 World Cup, are both illustrations of a nation intent on telling the world a particular story about itself – that it is a legitimate, trustworthy and important member of the international community.

The same applies to China, even though sporting and industrial progress have stalled somewhat since the pandemic. Its roster of four key World Cup sponsors featuring electronics (Hisense), mobile phones (Vivo), dairy products (Mengiu) and everything from property to media (Wanda) remains significant for a country hopeful of one day staging the tournament itself and a government keen to spread China’s influence around the world.

Rebels with a cause

Alongside the World Cup’s main sponsors, a tradition has emerged of business competitors during tournament engaging in “ambush” marketing. This involves brands using the mega-event as a marketing tool without the considerable expense of an official link (Fifa is reportedly charging around US$100 million (£82 million) for a four-year sponsorship deal).

One notably successful ambush was perpetrated by Bavaria Beer’s provocative campaigns at the 2006 World Cup in Germany and again in 2010 in South Africa. These stunts involved equipping spectators with branded clothing, which was smuggled into stadiums. This gained huge global attention which was no doubt frustrating for the tournaments’ “official” beer, Budweiser.

Yet even ambush marketing now appears to have become geopoliticised. For instance, during this World Cup, the authorities in nearby Dubai have been trying to draw attention away from Qatar with a tourism campaign featuring international football stars. The rival emirate will also be staging its own football tournament at the same time as the World Cup, featuring the likes of Liverpool, AC Milan and Arsenal.

And while in 2010, Bavaria Beer used women wearing orange dresses in its ambush, the UK-based brewer and pub chain BrewDog is trying to get in on this year’s action with its strident anti-World Cup marketing campaign.

Through a series of provocative billboards (in the UK), BrewDog is using references to autocracy, human rights abuses and corruption, all targeted at beer drinkers perturbed about Qatar’s staging of football’s biggest global event. While the bottom-line remains the same for BrewDog – to make a profit by selling beer – it is nevertheless contributing to the transformation of advertising and sponsorship from simple marketing to geopolitical posturing.

In a similar way, apparel brand Hummel has decided to hide its name and logos and the Danish football association’s badge from its kit. This is in protest against the treatment of migrant workers in Qatar and in support of LGBTQ+ communities.

In the company’s mission statement, Hummel emphasises its commitment to “Danishness” – and indeed, Denmark has been highly vocal in its condemnation of Qatar. Whenever the national team takes to the field, it will be in shirts that directly challenge the World Cup hosts.

So Qatar’s expensive ambitions in staging this tournament have come up against criticism and protest from countries and corporations alike. In 2022 it seems that football sponsorship is no longer just for kicks, or even customers. Everywhere you look, there are geopolitical points to be scored.

War and debt to rule: Interview with Michael Hudson

Corporate Europe Observatory – Quiet on the set! The EU is negotiating trade deals…

Following calls for openness and public participation, the European Commission now advertises its trade negotiations as transparent and inclusive. But crucial information about EU trade deals are still kept from citizens. Even member state governments […]