Rupert Read reports on the COPOUT in Glasgow 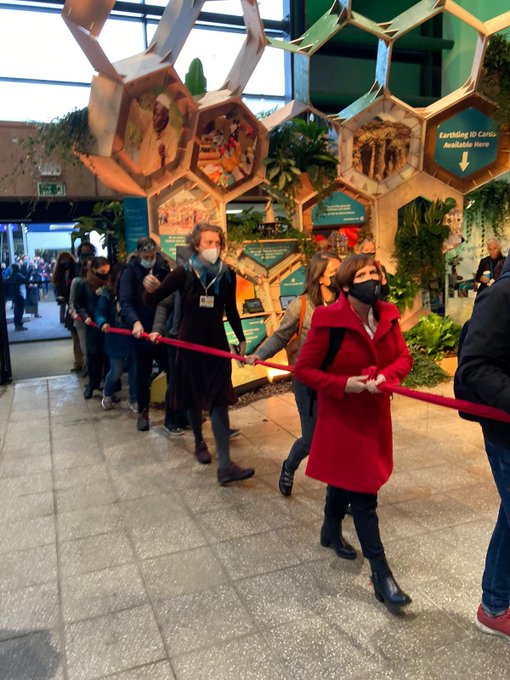 There’s a phrase used in politics; ‘to kick the can down the road’. No doubt you’ve heard it before. It means to put off confronting a difficult issue or making an important decision to a later date – and it perfectly sums up what’s happened at COP26.

It had been described as “our best last chance” but instead of taking it, the gutless message is ‘go away, have a think and come back next year and let us know’. The bitter truth is that virtually everything in the agreement hatched at Glasgow consists in empty promises or exhortations to do better next time.

Can you hear the noise of the can tumbling away down the street?

Well, guess what, this time someone has stuck their foot out and stopped it rolling.

In fact, lots of someones in the form of activists, campaigners and, crucially, ordinary people who have perhaps never been inspired enough to act before now, in Glasgow and across the world said: “Nope, not today.”

I’m talking about the inspiring walkout from Cop26 that >thousands< of those in the official ‘blue zone’ have just staged. Dignifiedly exiting a process that has categorically failed them and all of us.

How did it come to this?

For months I had been warning that COP26 was not going to be the great planet-saving game changer I know so many were hoping for.

“A bad deal is better than an awful deal or no deal at all.” I said, trying to manage expectations; but even I was shocked at what actually happened.

When I read the early drafts of agreement proposals published on Wednesday, they took my breath away with their inadequacy. The contents of these pitiful documents were how we were going to turn back the fast ticking clock?
At the start of COP Boris Johnson talked about it being “a minute to midnight”. Very well. By that reckoning, it must now be past-midnight.

For the clock can’t always be poised at just before midnight. Sometimes, one has to admit that time has passed, opportunities have gone, forever.

This Cop, at Glasgow, was the one. The Cop that was supposed to fulfill the mandate of Paris. And the Cop that happened to be timed to co-enact the post-Covid resetting.

It won’t do, to seek to divert the can straight onto Cop27. No, this time a reckoning must be reached.

For let’s be clear about what the gross failure at Glasgow means:

You can forget limiting global temperature rises to 1.5C above pre-industrial levels. Climate Action Tracker reckons that Glasgow puts us on track for 2.7 degrees of global over-heat! That is potentially terminative of our civilisation. The new UNEP ‘emissions gap’ report has it at 2.8. These figures are almost double 1.5. They are utterly unsafe.

Glasgow is where 1.5 was taken off life-support. Which means: that a lot more people are going to be killed.

Even the weak Glasgow draft text itself expressed “alarm” that emissions were far higher than the levels needed to stay within that threshold.

The British Government have tried to achieve a ‘Yes we can!’ vibe here at Glasgow. Much of the world’s media, including strikingly the bbc, have gone along with this: take for instance the endless repetition of ‘Keeping 1.5 alive’. But the truth is that this is just another forlorn version of ‘1 minute to midnight’. Any even-remotely honest analysis of the situation makes plain that this Cop has failed us, that 1.5 is dead, and that kicking the can down the road a year, as they are doing on emissions pledges and on finance, is merely a ploy to distract our attention.

So: we must refuse to be distracted.

The can stops here…

Just when I thought all hope was lost, people came through. The mass walkout from Cop26 that as I write has just occured was heartening but even it is not enough.

Now we need to build on that, we need to come together and form a ‘moderate flank’ willing to protest on the streets, in our workplaces, schools and universities to demand our governments pick up that can and never let it roll away again. And if, as is likely, they mostly won’t: then we’ll get on, bottom-up, and do it ourselves…

After all, now that we recognise that it’s five past midnight, then there’s clearly no more time to waste pretending…

Bill McGuire – Is the Climate Worst Case getting Worse?

Everyone is so concerned about the impact of Covid19 on society and economy that they have taken their eye off the most important issue: climate change Bill McGuire is Professor Emeritus of Geophysical & Climate Hazards […]

Pursuing national sovereignty means keeping foreign powers out of your domestic politics not inviting them in, as Ukraine’s leaders have been doing for decades Lee Jones  is Reader in International Politics at Queen Mary University […]