Surrealism is king! Germany and other European neo-liberal policy makers are trying to take control of Italy’s finances. As usual, neo-liberal economists are there to help. 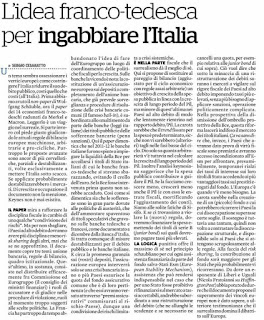 There seems to be only one theme that really obsesses German and European leaders: how to force Italy to reduce its public debt, cost what it may (for Italy). Previously we had  German finance minister Wolfgang Schäuble’s “non-paper”, now we have a paper by 14 Franco-German economists gathered together for the purpose by Merkel and Macron.  Reading it is a journey into the surreal. These economists start well enough, judging the current institutions and rules of European fiscal policy to be cumbersome, arbitrary and procyclical. But the proposals that follow are too clever by half, and vexatious, with one goal only: to put Italy under EU control. If applied, they would probably destabilise financial markets. The document makes no mention of real problems, such as growth and employment. It is as if Keynes had never existed.

Specifically, the paper aims to strengthen fiscal discipline in exchange for some “risk sharing” among partners. Evidently, austerity can never go far enough. And in order not to be misunderstood, countries with high debt will have to accept more discipline and receive less risk sharing than others. The document is made up of three parts: the first is devoted to the completion of the banking union; the second to budgetary rules; and the third to the institutional framework. In essence, the latter concerns the most effective way to  assign the roles of defendant and judge respectively in violation procedures – roles that are currently too much at the mercy of political whim. France seems to have abandoned the idea of turning the Euro group (the Council of Finance Ministers) into a place where countercyclical budget policies are coordinated, and has now surrendered completely to the German reduction of economic policy management to a strict observance of rigid rules.

The trouble concerning the completion of the banking union is well known and concerns the establishment of a European deposit insurance scheme, which already provides for supervision and resolution procedures for bank crises (the famous bail-in). The German consent to a common deposit insurance scheme is subordinated to the disposal by banks of the national Treasury bonds and non-performing loans in their possession beneath a certain threshold (sanctioned by penalties). Here the paper forgets that in 2011-12 Italian banks were pushed to use the ECB’s liquidity to take over Italian government bonds, which the Franco-German banks were getting rid of, to avoid the pending default of the Italian government and the collapse of the euro. If the ECB had been permitted to intervene earlier, as it finally did in summer 2012, this would not have happened. They also forget that the amount of non-performing loans held by Italian banks was severely aggravated by counterproductive austerity policies. On the other hand, the appalling amount of speculative securities held by German and French banks, as documented by the Bank of Italy last December, has been forgotten. For Franco-German economists, government bonds are considered a problem, but derivatives are not. These proposals are therefore destabilising for Italy’s public debt and the Italian banking system. And with regard to the promised guarantee on deposits, European deposit insurance will intervene only if a banking crisis in one or more countries exhausts the own national share of the common insurance fund and that they will have paid for through “insurance premiums” commensurate with the national risk. Accordingly, the risk sharing is limited to systemic crises.

But it is in the fiscal part that surrealism really gets into its stride. Here, it is proposed to replace the balanced budget rule (cyclically-adjusted according to economically arbitrary rules) with a target for the growth of public expenditure that should be in line with the long-term growth of GDP in virtuous countries, but lower than GDP growth in high debt countries, so that they would slowly reduce the debt-to-GDP ratio (but also gradually shrink, raising the level of welfare spending). The carrot would be that the trend set for expenditure is cyclically independent, so that in the phase when tax revenues fall, deficit spending will be automatically lifted, offset by budgetary surpluses in the growth phase.

God alone knows how much theoretical and practical arbitrariness goes into calculating the long-term growth of a country’s GDP. Moreover, according to the long-term Keynesian model, it is public expenditure, among other autonomous expenditures (like exports), that drives GDP. If the latter is growing to 2% and we are setting expenditure growth at 1%, GDP growth is likely to decrease (and with it tax revenues, increasing public debt). We are thus condemned to a Sisyphean task imposed by the pen-pushers in Brussels. And if a nation were to be in breach of the (new) rule, it would have to raise new funds by issuing B series (junior bonds) which would be the first to suffer in case of debt restructuring and on which it would therefore have to pay higher interest rates.

The punitive logic is most evident with the old German warhorse: any financial assistance from the European Stability Mechanism (ESM) bailout fund, which may be indispensable in the event that a state is incapable of refinancing itself on the market at acceptable rates, would be subject to debt restructuring (which would lengthen its maturities and, if necessary, cancel a portion of it, e. g. in respect of the above-mentioned junior bonds). The key passage in the entire document and representative of the German position is the statement that, following the proposed reform, “insolvent countries lose access to finance faster if the no-bailout rule is credible, than if it is not.” (p. 17). That is to say, under the threat of a debt restructuring, it will be the markets that monitor the fiscal rigour of countries with high debt, which will thus automatically be controlled, without the need to apply sanctions, avoiding what is always a politically complicated exercise. With an end to the ECB’s protective umbrella looming and Draghi leaving the ECB in 2019), the ESM will remain as the only shield, and so contrived, it is evident that it will promote the dislocation the Italian securities market. Moreover, it goes without saying that countries that have shown fiscal virtue are rewarded and will have unconditional access to the ESM to deal, presumably, with temporary surges in yields on their government bonds, by resorting to the most advantageous rates on loans issued by the fund. Europe is there when it is least needed.

The teaser in the document is the creation of a (small) fund to stabilise the cycle, which could be used by countries whose unemployment rate exceeds certain thresholds. The caveats are so oppressive that they make the proposal offensive. The support is one-off, therefore not aimed at reducing structural unemployment, and available only to countries that scrupulously adhere to the rules. With regard to risk sharing, the contribution to the fund will be greater for those countries most likely to use the fund. Finally, Keynesian readers will not fail to note that the building-up of the fund itself over time, through contributions from states in good times, is a deflationary measure.

So how on earth one of the leading exponents of the leftist Italian politcal party Liberi and Uguali (Liberty and Equality party) could conclude that the document proposes overcoming European austerity is difficult to understand. But we can take this as further evidence that in the field of euro-zone economics surrealism is king.

Public debt is probably one of the most discussed and least understood aspects of economics Lars P. Syll is an economist at the Faculty of Education and Society at Malmö, Sweden, not to mention a […]

Following the diesel cheating devices in most diesel models, plug in hybrids appear to be the next major scam. The Öko-Institut (Institute for Applied Ecology)  is a non-profit, private-sector environmental research institute in Germany Original […]

Richard Murphy – Doctors are suggesting our politicians might be committing social murder and the press does not notice. How does that happen?

This is a topic that has been meticulously avoided by corporate media and has been kept out of the public discourse: responsibility of governments for hundreds of thousands of unnecessary deaths. Richard Murphy is a […]