The consequence of neo-liberalism be it from the left or right, is racism, which is one of the main tools of fascism.

Cross-posted from Blogging in the Wind 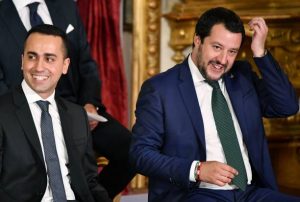 In Italy we are seeing again the ancient practice of pointing to an “external enemy”: this time the target is migrants. The reason is the discontent over the damage done by policies during recent decades; which have increased poverty and unemployment and dashed most citizens’ hopes of attaining even simple economic security. The former Left have abandoned their demands and so the protest vote is going to political forces that appear uncompromised by the past. Yet their programmes are bound to make things worse.

Thirty-five euros for each migrant – the amount Italy pays per day – make 12,775 euros per year, 1,065 per month. Perhaps not everyone knows that only 2.5 euros of those 35 euros go to the migrant, while the rest is used for food, housing and general expenses. But in Italy there are 3 million officially unemployed and probably just as many who do not appear in the official statistics: how much does the state spend on them? Zero. And how many of those who are working earn less than 1,000 euros, or are retired and receive still less? We must add several million people.

And now we have a weapon of mass distraction, the ancient remedy that just needs to find an enemy “outside”. The slogan is a perfect one: “Italians first”. The last become the second-to-last, and they wage war against the new “last”. Whether they steal resources, steal jobs or compete with each other, wages that are already wretched will fall.  It is their fault that the second-to-last are doing so badly.

Do you remember this? The contrast between “super-guaranteed” and precarious workers: it is not fair, not right, is it? So what is to be done? Naturally, everyone’s job should become precarious.  Only then do we have equality! The other invention is the conflict of “old people against young people”: we are forcing our children into debt, cutting, cutting! Once upon a time – but it was during the last century – there were those who said that there was another conflict: rich against poor (the order in which the two nouns always appear is not accidental).  Those who said something like this were commonly called “left-wing”. Then those who were in the left-wing parties began not to say it anymore, and sometime later the thesis spread that “right and left are outdated concepts”. That is a false thesis: the Right is not at all outdated – it has won all the way; the Left is not at all outdated – it has been abandoned.

And so those who seek a job and do not find one, those who have to give up looking for work, those who have some rag of a job, but are poor just the same, all those who instead of hoping for a better future look at it with fear. Who do they turn to? Those who tell them that if they deserve it they will succeed, adding to the practical difficulties the idea that if you don’t manage to do it well it’s your fault? They turn to those who explain to them that there is a person responsible for their situation: “I’m going to take away from them – what? – and give it to you.”

And so the second-to-last, instead of getting angry with those who make policies that presuppose a certain number of unemployed, vote for those who do not provide for those in difficulty, who privatise the essential services so that they can earn money even on those. They have no intention of changing those policies. And in fact they have already announced a general discount  for fiscal debts  of up to 100,000 euros (only the first step) hoping for additional revenues to finance the flat tax, i.e. a type of taxation that gives no advantage to the poor, but gives something to the wealthy, and a great amount to the rich, for a long time to come. Isn’t there a right wing anymore? Don’t make us laugh (bitter tears).

And what choice did they have? Could they vote for those who claimed “The restaurants are full” or “We brought Italy out of the crisis”? No, thank you, we have tried them out already. The only alternative was to vote for those who promised at least something concrete, an income to those who do not have one. And so it went. Those who voted for waging war on the last have been cheated, but it seems that they are still not aware of it. Those who voted for a minimum income still are not sure if they will receive one: but even if they give it to them, and the how and what have still to be determined, we will have to evaluate what they will take away, from the recipients and also from others, to find the necessary financing. Only then will it be clear whether they really have gained. However, we can hazard a forecast. Given that the coalition government has decided for tax amnesties and the flat tax, the final balance can only be negative. Perhaps they will receive their basic income, but they will have less health, less school and university, and more expensive services, not only for them, but for everyone else as well. The little money going to the second-to-last will be paid mainly by the third-to-last, that middle class which is being pushed lower and lower, further away from that economic tranquillity enjoyed by fewer and fewer people.

The latter are those who voted for the “traditional” parties, the Democratic Party (PD) and Forza Italia, whose social models have become more or less indistinguishable. This is a script that has been repeated throughout Europe, where the former social-democratic parties, which were in government almost everywhere at the beginning of the century, have been reduced to historical lows, if not swept away.

These parties have added, to the detriment of their policies, even more serious “cultural damage”: they have so discredited the concept of the “Left”, that now the majority of voters no longer want to hear about it. So, rebelling against the right-wing policies they are at the point where they will vote for anyone who seems to offer an alternative. It is despair, not populism. It will take a little longer to prove to those voters who rejected the traditional parties to discover that the far-right League and its allies are not an alternative but the frustration of those policies. And they will learn that the Five Star Movement, without any cultural anchor that offers some coherent model of society, betrays the inadequacy of its confused proposals. Today it is really difficult to imagine where this situation will lead us.

Dean Baker – The Paul Krugman Boom: Don’t Bank on It

There are number of very good observations in this piece that are being completely ignored in Europe. Dean Baker is a Senior Economist at the Center for Economic and Policy Research (CEPR) Cross-posted from Dean’s […]

“If we want things to stay as they are, things will have to change” Thomas Klikauer teaches MBAs at the Sydney Graduate School of Management, Western Sydney University, Australia Catherine Link is at the Western […]