The UK is undoubtedly doing well with their vaccination programme, but all that came before that has been a murderous disaster

Steffi Doebler is a lecturer in sociology and social statistics at Lancaster University. Her interests lie in inequalities and poverty and their effects on the human life course. She is also a trade union member 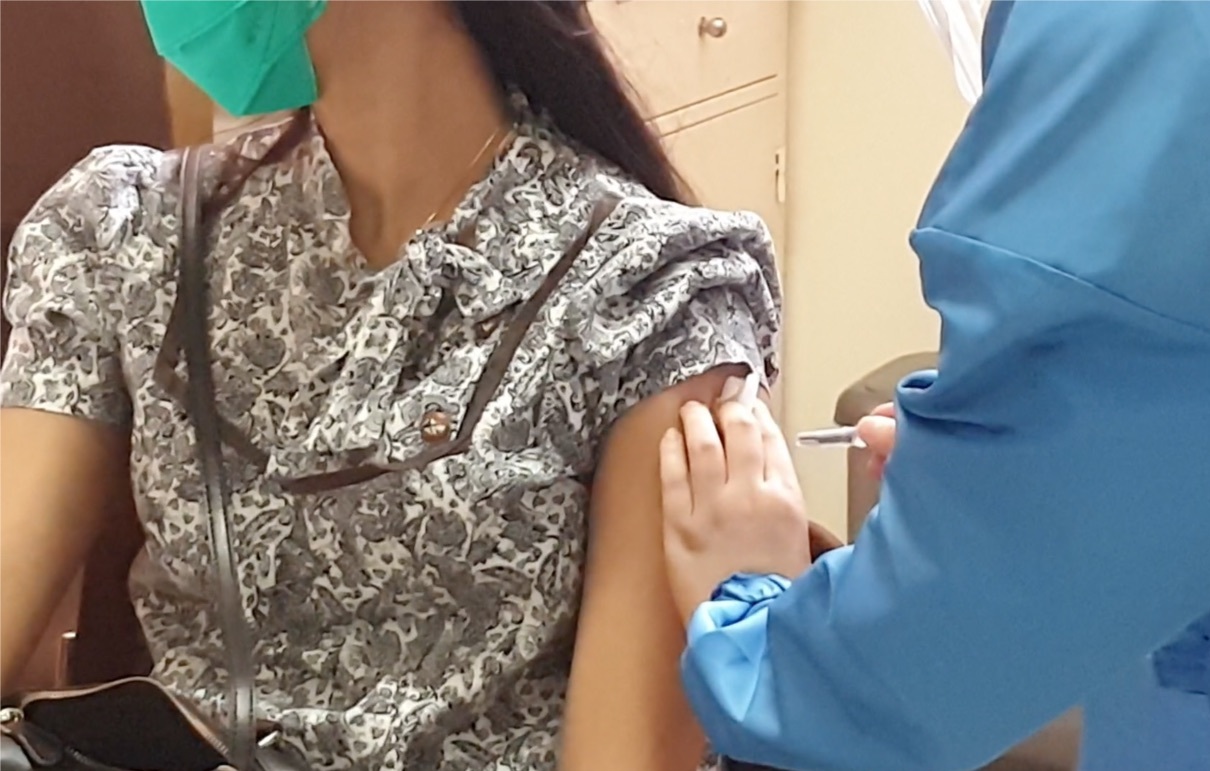 The UK government’s self-celebratory credit taking for a fairly successful covid vaccine rollout is an attempt to distract from its legacy of failures and its responsibility for a ruthless disaster capitalism which have led to 112,000 covid deaths.

The UK has the highest number of cumulative covid-19 cases and the highest covid death rate in Europe to date. Rampant inequalities are a major causal variable in this. Research has shown repeatedly that minorities & the working class are less able to afford working from home, they are therefore more exposed to the covid-19 virus and at a much higher risk of contracting it and of dying from it. The evidence has also shown that covid-19 numbers are higher and more persistent in poorer, socio-economically deprived areas. Covid-19 is killing the most vulnerable, working class, ethnic minorities, asylum seekers. This is happening in the UK and across Europe.

So what has the UK’s Tory government done about the rampant inequalities that lie at the heart of this pandemic? It has been working hard to increase them – for years!

The UK is the most unequal society in Europe when it comes to income and among the most unequal when looking at accumulated private wealth. It has held this position for over a decade, as the Gini coefficient figures from Eurostat show. Income inequality in the UK has increased between 2016 and 2018, the latest figure by the Office for National Statistics (ONS) sets the Gini coefficient for 2020 at 34.6 – a further increase by 1.1 points. The ONS also reports that the incomes of the richest 20% of people in the UK are currently over six times higher than those of the poorest 20% .

The UK’s history of stark inequalities between the wealthiest 10%, who now own c 54% of the UK’s entire private wealth and the rest has been famously analysed by Thomas Piketty in “Capital and Ideology” (2020). By all available measures, inequality in the UK is among the highest in Europe and it has increased since the 1980s. Inequality has always been a problem, but now under covid-19, it has lead to human tragedy.

It is a known fact, often ignored by European elites, that inequality causes poverty and manifests it, thereby costing lives. At least in the UK, neoliberalism and austerity have long been going hand in hand in causing hardship to millions of people.

The Tory party’s 11 years long austerity regime of ruthless cuts to the welfare state, especially cuts to poverty benefits, has laid the groundwork for the current covid crisis and has even before covid-19 already caused thousands of deaths. Meanwhile, the rich are getting richer – some have been profiting handsomely from the crisis through government handouts worth 11 billion $ in PPE and covid-testing contracts, as recently reported in the NYT (https://www.nytimes.com/interactive/2020/12/17/world/europe/britain-covid-contracts.html ). This is the very definition of disaster capitalism as Naomi Klein has termed it in her 2008 book The Shock Doctrine.

While income inequality has increased in the last decade, so have precarious and insecure employment, poverty and homelessness. At the time of writing, child poverty in the UK stands at 30% of the child population. It has been at this level for five years. A report by the Institute for Fiscal Studies from 2017 projected child poverty to increase from 30% in 2015 to 36% in 2021–22 (https://www.ifs.org.uk/publications/8957). More than a Third of children in the UK are thus projected to live in relative poverty in 2022. This projection was made in 2017 – before covid; if anything, new projections that adjust for the covid effect will be worse.

The numbers of households in temporary accommodation (a measure of homelessnes) have also steadily increased since 2013, long before covid (see below figure). 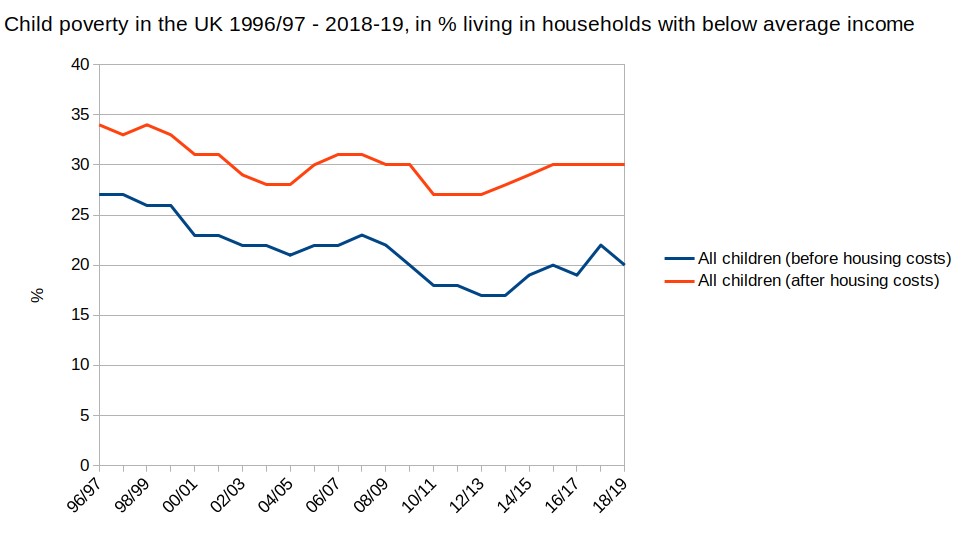 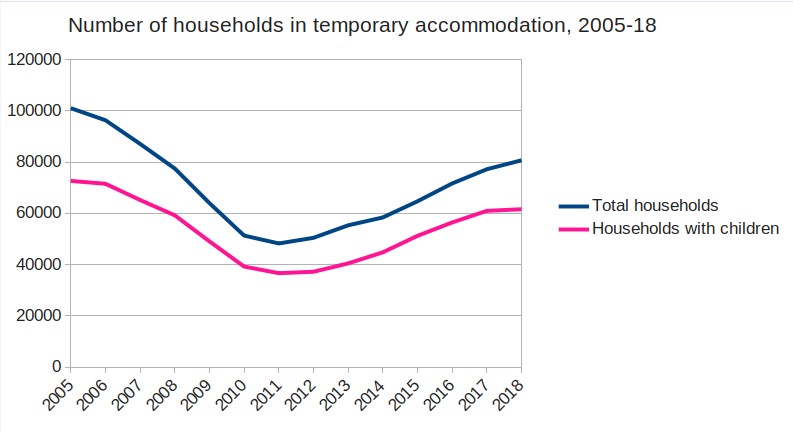 The numbers on unemployment and precarious insecure employment were on the increase since 2018 – especially for young people – and are predicted to increase further under covid.

Between 2018 and 2020, the percentage of people employed on precarious zero hours contracts went up, especially for the young, the workforce aged 16 to 24, by 3 percentage points. Now, under covid, particularly the young working class are losing employment, or are unable to find it. All of these numbers are direct results of Tory government failures pre-covid, mainly austerity effects. 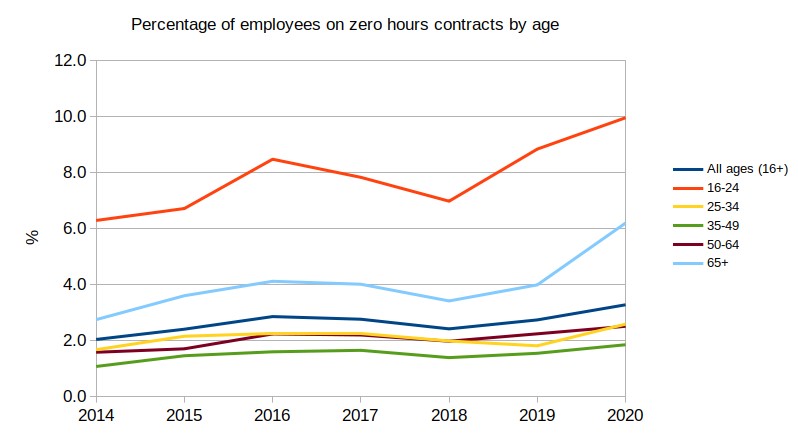 So, what is to be done? Calls for the government to take action to remedy inequality and poverty and to combat unemployment have become louder as the pandemic progressed. But the British Tory government’s attempts at addressing the issues, especially remedying the stark ethnic and class inequalities and child poverty have been half hearted at best. There has been a furlough scheme similar to other countries’ job retention schemes since March 2020, and the government has started a (delayed) “kickstart” initiative to allocate publicly funded internships to the young unemployed. But the latter is riddled with bureaucratic hurdles and to date has failed to bring sufficient numbers of young people into employment. The scheme was never designed to actually boost jobs in the first place, it was only ever a band aid awkwardly placed on a major fracture. But it serves the government’s need of being seen doing something.

Let us not forget that just in December, Tory MPs voted against extending the free school meals scheme for the poorest children over the Christmas holidays. This caused public outrage and has inspired Manchester United player Marcus Rashford to join the opposition in campaigning for an extension of free school meals and of poverty benefits. Those in defence of the current government could say that an extension to free school meals has been granted in the end and that there was a tax funded food parcel scheme. But like most schemes this government has pursued, the food parcel scheme was outsourced, rolled out via a private firm who made profits from supplying meagre, heavily overpriced food rations to the poor – all paid by the taxpayer. This unsurprisingly caused a twitter storm of outrage, and the world could once again see the disastrous consequences of neoliberals taking on public and welfare tasks. The provision of publicly funded laptops for school children from deprived areas proved to be similarly disastrous, with widespread media coverage of complaints by schools who have been severely under-provided.

It is embarrassing for the British Tory government that it took sustained media campaigns by celebrities shaming it into delivering basic help for the most vulnerable in society, and the government’s covid response still contains no plans for actions to rectify the extremely worrying ethnic and class inequalities that are causing so many covid deaths. Ensuring basic welfare and preventing social injustice is every government’s job! This is especially true in a time of crisis.

What is needed now, in the UK and elsewhere in Europe, is an economy of solidarity and care. We need good policymaking that addresses the issues. Sustainable solutions, such as a wealth tax to be paid by the richest in society to help pay for covid, a mansion tax, sustained action to tackle unemployment and deprivation have been offered by several experts. UK and European governments need to take the advice and act on it.

The European Central Bank’s new Transmission Protection Instrument gives it even more power over Eurozone member-states Cross-posted from the Positive Money Europe blog What does fragmentation in the Eurozone mean?  Fragmentation is the divergent movement […]

Commodity traders wreak havoc on global markets and profit from ecological and social devastation. Can they be stopped? Joseph Baines is a lecturer in International Political Economy at King’s College London Sandy Brian Hager is […]

Searching for a better instrument to measure national output. Michael Roberts is an Economist in the City of London and prolific blogger Cross-posted from Michael Roberts Blog At the recent Allied Social Sciences Associations ASSA […]