As Steve Keen points out, the discourse of mainstream economists concerning stopping climate change is as wrong as its discourse on economics. Until we bin the whole lot and develop a completely new discourse concerning both, there is little hope for the future.

We shall continue with part two when it appears.

Steve Keen is an economist. He is an expert on Minsky’s Financial Instability Hypothesis, and is one of the handful of economists who warned of the 2008 crisis.

Economists are not your friends

Rebellion is in the air. On November 17 of last year, the “Gilet Jaunes” movement spontaneously erupted in France, in reaction to a planned tax on diesel fuel. Over 300,000 people took part in demonstrations across France, with actions ranging from blocking roundabouts to vandalizing banks, shops and luxury vehicles. As I write these words, the movement is still holding demonstrations across France every Saturday.

Almost as spontaneously, a youth movement calling itself Extinction Rebellion came into being in the UK, and held its first “Rebellion Day” on the same day that the Gilet Jaunes first shook France. This initial action, which blocked London’s five main bridges, was much smaller and lower key than the Gilet Jaunes protests, but by April 2019, non-violent civil disobedience protests brought large sections of London to a halt, and resulted in the arrest of over 1,000 demonstrators.

These movements are superficially diametrically opposed: one was provoked by measures to address climate change, the other is demanding action on climate change. However, they are united by one key detail. The policy action that the Gilet Jaunes oppose, and the policy inaction that Extinction Rebellion deride, are both the products of economists—and most specifically, the economist who was awarded the Nobel Prize in Economics for his work on Climate Change, William Nordhaus.

The Gilet Jaunes rebellion was sparked by the proposed introduction of a carbon tax on diesel fuel—and this is precisely the method that Nordhaus and most economists recommend to use to combat Climate Change.

Extinction Rebellion was sparked by the failure of policymakers to do anything substantive to prevent Climate Change, and are demanding policies that would cause net CO2 emissions to fall to zero by 2025:

The truth is that the climate and ecological emergency poses an unprecedented existential threat to humanity and all life on Earth.

Rapid, unprecedented changes to many aspects of human life – energy use and supply, transport, farming and food supply, and so on – are now needed to avert global climate and ecological catastrophe.

Globally governments have been unwilling to tackle a problem of this magnitude. In 2015, the UN Paris Agreement on Climate Change was signed by world leaders to limit global warming to 2°C above pre-industrial levels. However, scientific evidence now tells us that our leaders have not taken enough action and we are still on a path to reach 3-4°C, which will be catastrophic to all life on Earth. (https://rebellion.earth/the-truth/demands/, May 3rd 2019)

Nordhaus agrees that man-made Climate Change is happening—he is not a “Climate Change Denialist”. However, his research actually encourages policymakers not to take the action that Extinction Rebellion demands, or anything like it. He instead recommends managing Global Warming so that the Earth’s temperature will stabilize at 4 degrees above pre-industrial levels in the mid-22nd century 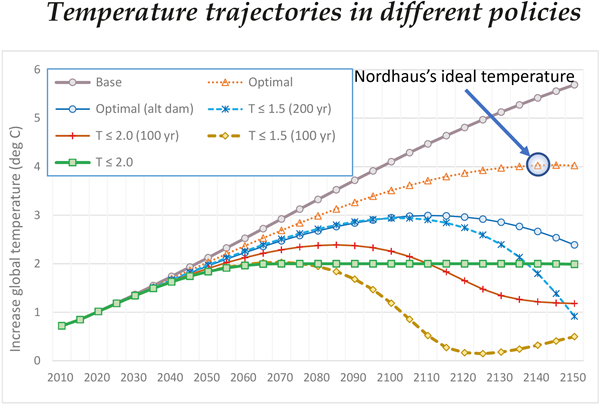 Nordhaus also argued that the policy Extinction Rebellion recommends, of restrict Global Warming to 1.5 degrees—even if it is done over the next century, rather than the next six years as Extinction Rebellion demands—would cost the global economy more than 50 trillion US dollars, while yielding benefits of well under US$5 trillion. 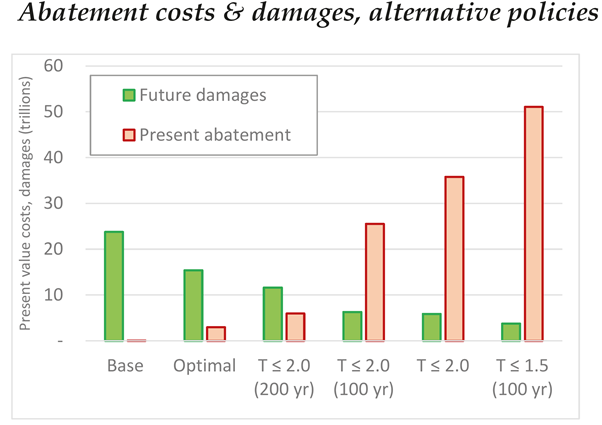 How is it possible that the optimal temperature for the planet is 4 degrees above pre-industrial levels—and that damages from that level of warming would amount to under 10% of global GDP—when it would also be “catastrophic to all life on Earth”? How is it possible that Global Warming of 1.5 degrees would reduce global GDP by a few trillion US dollars—less than 5% of what it would have been in the absence of Global Warming—while the policies to achieve that limit, even if executed over a century rather than just five years, would cost over ten times as much?

It isn’t. Instead, either Extinction Rebellion’s claims are vastly overblown, or Nordhaus’s estimates of the economic damages from Global Warming drastically understate the dangers.

Both are possible, of course. But categorically, Nordhaus’s estimates of the potential economic damage from Global Warming are nonsense. They are also one of the key reasons why policymakers have not taken the threat seriously. If Extinction Rebellion is going to make policymakers take Climate Change seriously, then one of their first targets must be Nordhaus and his DICE model.

By Vicki Squire, University of Warwick Carola Rackete, captain of the Sea-Watch 3, was arrested on June 29 for docking the search and rescue vessel in Italy without permission. This is the latest confrontation in […]