Next Generation EU funds: conditionality has been reintroduced through documents produced by the unelected European Commission 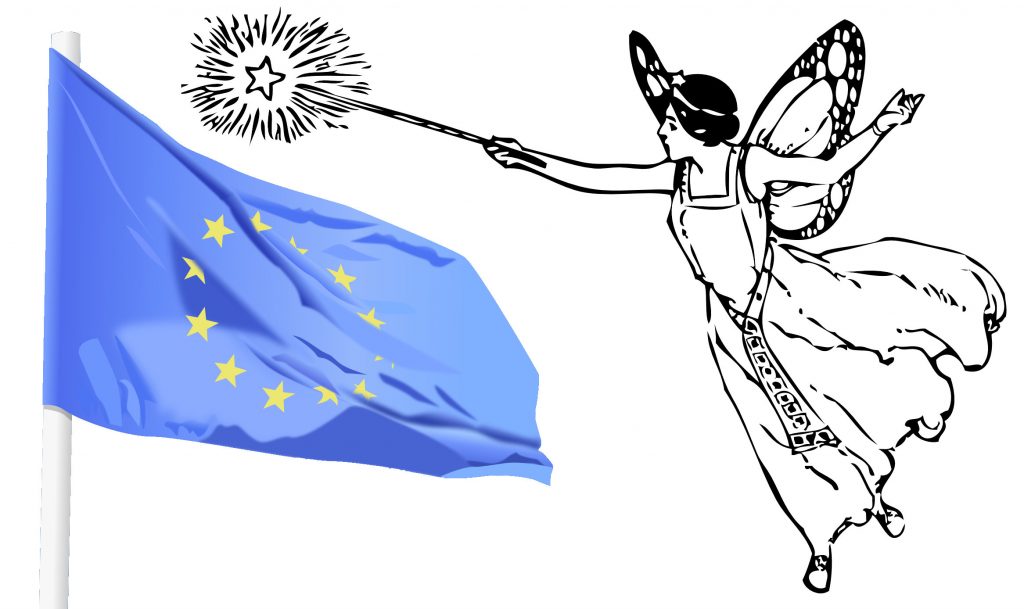 Last week I was reading an article critical of the Next Generation EU recovery and resilence package. The author used Virgil’s famous phrase “timeo Danaos et dona ferentes” (Beware of Greeks bearing gifts) to suggest that Next Geneation EU fund will be a Trojan Horse for another round of Neoliberal reform. What I think he missed was that it is Spain who paid for the gift as I explained in a past article.

When the European Council meeting of July last year agreed to approve a package of financial assistance, apparently with a net transfer of resources to the Southern European countries that had been most badly hit by the COVID-19 pandemic, our pro-European Left was exultant. Pablo Iglesias, the leader of Podemos declared that the European agreement allowed the Government to continue its policies without budget cuts and with “soft” conditions. They assumed that billions of euros would pour into the Spanish economy. This money could be used to radically transition our economy out of its low value added industry and tourism-based model—which had proven to have feet of clay when the pandemic hit our economy— and implement a Green Deal economy, invest in Research and Development and innovative industry. Unlike the previous rescue of 2012, this time was different!

How that can be done by sending funds to Brussels and getting the same amount back with a tip for good Neoliberal behaviour escapes my understanding.

Hungary and Poland were incensed by the European Commission’s proposal to include rule of law as a condition to benefit from the Next Generation EU funds. Led by far-right xenophobes the two countries were vilified by Left-wing Spanish politicians and the progressive media. Yes, Orban and Adrzej Duda are unsavoury characters and hard right politicians. But the Spanish Left failed to appreciate how important it is to uphold popular sovereignty from the onslaughts of an unelected body of technocrats. Once again the Spanish Left proved to be blissfully naïve regarding the true intentions of Brussels and chose the wrong side in the political wrangling that ensued between Brussels and the Eastern European rogues.

In fact the Next Generation EU funds may soon prove to be more damaging to the Southern European countries than the previous 2012 rescue with its draconian conditions and an obscene intrusion of the so called troika, the nasty coalition of ECB, EU Commission and IMF technocrats overseeing the application of unreasonable and cruel austerity to the Southern European nations. That’s because these funds have become an excuse for the Spanish Cabinet to avoid the fiscal impulse required to compensate for the collapse in output caused by the pandemic. Indeed a report by the think tank Bruegel shows that Spain had approved in 2020 one of the smallest immediate fiscal impulse packages among the discretionary 2020 fiscal measures approved by advanced economies. The problem is that the Next Generation EU funds will not be available until the second half of 2021 and the bulk will only arrive after 2022. Too little, too late. What is especially disturbing is the suspicion that a large chunk of the funds will primarily be destined to the large oligopolistic concerns of Spain.

One can only be dismayed at the Left’s ignorance of the true nature of the European Union. The EU was not created to fund the expenses of other countries but to open up markets to net exporting countries and enforce an agenda of Neoliberal State interventionism. Northern European countries will not transfer funds to Southern European nations without some sort of compensation.

The EU has now figured that it doesn’t need a troika in Spain. It now speaks softly but is still carrying a big stick. All it needs is that national governments understand what their place is in the hierarchy of European nations. They can be easily cajoled into submission with the promise to transfer a few decimals of their GDP in compensation for relinquishing their market to the net exporters.

Both Pablo Iglesias and Pedro Sánchez ran on platforms promising to undo the most lethal aspects of the counter-reformation forced by Merkel, Sarkozy and Barroso on Spain during the crisis of 2010-2012. They had promised to reverse the labour reform of 2012 that was imposed by dictum through a letter from the “independent” central bankers Jean Claude Trichet and Miguel Ángel Fernández Ordóñez sent to the then serving Prime Minister Rodríguez Zapatero. Pedro Sánchez said in May last year that his government was going to “recover the labour rights taken away by the reform of 2012”. Pablo Iglesias warned that same month that the coalition agreement would lead to the complete overturning of the labour law reform of 2011. “What is signed binds” he added.

But will they deliver?

Spain did not join the Eastern European xenophobes in the battle to ensure that Brussels would not have the capacity to impose a suite of Neoliberal reforms as a condition to gain access to our own money. That was foolish for Pablo Iglesias; maybe not so much for Pedro Sánchez whose “progressive” statements and promises to the electorate were a deception for the voters of his party. Pedro Sánchez is as much a Neoliberal as Ursula von der Leyen.

By agreeing to give Brussels an additional transfer of billions coming out of the Spanish State’s budget in hopes of getting the same amount plus a few decimals of our GDP back, Pedro Sánchez has effectively given the ball to Ursula von der Leyen. Now she gets to decide who plays with it and for how long.

Yesterday we learned that Brussels will suspend the recovery funds if the countries “do not comply satisfactorily with the goals of their plans”. The hard conditionality required by countries such as the Netherlands and Austria was apparently avoided in the European council. But we now know that conditionality has been reintroduced through documents produced by the unelected European Commission.

A recent document of the European Commission clarifies that access to funds will require “Recovery and Resilience Plans” that “should be composed of reforms and investments, grouped into coherent components”. “Reforms will be essential to ensure the efficient and effective implementation of investments by providing a supportive business and administrative environment and by preventing the misuse of EU funding”. These plans will “improve the functioning of the economy and society and the sustainability of public finances, to create jobs, strengthen active labour market policies and support job transitions where needed, to enhance inclusive growth and social cohesion and to make sectors, economies and social systems more future-proof and more resilient to shocks and change.”

We all know what structural reforms, as required by the EU, mean but, just in case you don’t, the document clarifies that the reforms “might also bring budgetary savings (such as some pension reforms or the removal of environmentally harmful national subsidies)”. They will also be judged for their “impact on the general government budget deficit and debt”. The EU throws in a few dashes here and there of mentions to green deals that will appeal to some progressive. The wolf dresses in sheep’s clothes but it is still the same wolf.

Having walked into the trap, the Spanish Government now needs to provide details about the reforms it is required to introduce before any money is disbursed. And here is where things start getting sketchy; so sketchy that even former advisor to Pedro Sánchez and Rodríguez Zapatero, Jordi Sevilla Segura, who one would presume to be well informed, had to confess in a tweet today that he had no idea of what reforms the Government was sending to Brussels. “I don’t know them. They have not been presented to the Parliament nor public opinion except for partial filtering of one”.

Economy Minister Nadia Calviño said in Parliament last week that the reform plans were on their way to Brussels if not already there. What kind of a statement was this? Are the Spanish Government plans there or not? It appears that the Government has sent very vague proposals to avoid widening the gap between the two partners of the coalition government. We know that Calviño wanted to back out of the labour reform promises and replace the promised derogation of the 2012 regressive labour laws with a new set of watered down reforms that would be appealing for business. Social Security Minister Escrivá also wants to reduce future pensions by increasing the number of eligible years contributed to the Social Security system from 25 to 35. This has apparently been put on ice after Podemos refused to support it. For the time being Pedro Sánchez has decided to appease his junior coalition partner…for the time being.

Time might prove me wrong. Maybe the Podemos members of the Spanish cabinet will be able to stop Calviño’s and Escriva’s attempt to abort the repeal of the conservative reforms introduced under Zapatero and Mariano Rajoy. Yolanda Díaz, the Minister of Labour who comes from Unidas Podemos, is battling for measures to end the high rate of temporary contracts in the Spanish job market. We will see what comes of this but it is increasingly looking like promises will not be kept and that the coalition agreement is now a dead letter.

Unfortunately Ursula now decides if, when and how much money Spain gets. The clock is ticking. This year, with a pandemic that is out of control and new confinement measures and restrictions for the entertainment and hospitality sectors, the Spanish economy is unlikely to recover. We need our money back —plus the decimals of GDP— so it will be hard for the Spanish cabinet to resist the demands of the Commission.

The Spanish people are systematically lied to with vague promises of progressive reforms made during election campaigns that are then abandoned when the time to govern comes and the politicians need to act “responsibly” and meet our “international commitments” with our European “partners”.

But the real question is what legitimacy does an unelected body of technocrats have to decide what reforms are appropriate for Spain, bypassing any debate at the Parliament, and demand that the Government send detailed plans in exchange for our money. That is “democracy” in the European Union: a sham in which member states gives the European Commission the power to bully governments so that electoral promises are sidelined, key decisions made behind closed doors, unpopular Neoliberal reforms applied, and distribution of funds are handed out to large corporations; all through an opaque and undemocratic process.

Although republicanism in Britain is subdued, the death of the queen puts the monarchy into question George Hoare is Co-host of BungaCast and one of the founders of The Northern Star, a journal of democracy […]

Since 2014, Europe has become more dependent on fossil fuels from Russia. It didn’t have to be this way Tara Connolly is senior gas campaigner at Global Witness, an international NGO working towards a more […]

We are receiving contradictory predictions and analyses of the world economy, but numbers for the Western nations remain sobering. Michael Roberts is an Economist in the City of London and a prolific blogger Cross-posted from Michael Roberts’s […]