A couple of day ago we posted an article from Italy (here) concerning the EU COVID recovery funds. Today we have one from Spain. The two analyses are much the same. 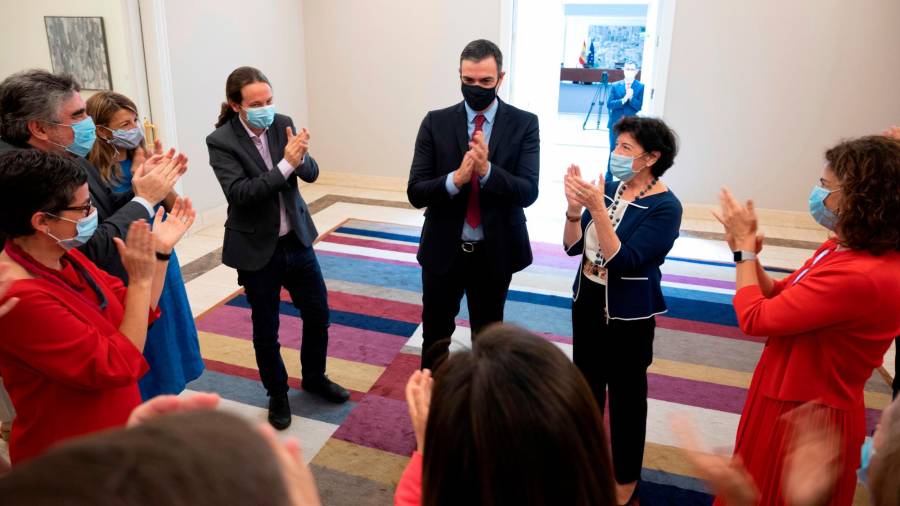 Spaniards will remember Pedro Sánchez’s triumphant return from the July European Council meeting from the televised images showing him being welcomed with applause in the lobby of the Moncloa Palace, the official residence and workplace of the Prime Minister of Spain. It was a dramatisation orchestrated for the media. Some propaganda officer wanted to praise Sánchez as the leader who had demonstrated his expertise in navigating the stormy waters of the European Council negotiations.

But this image served more purposes. It was also an act of reparation for the European Union’s tarnished image. After weeks of bitter discussions, in which the Dutch prime minister’s haughty comments had aroused feelings of national indignation in the southern nations, an incipient Euroscepticism was perceived among the Spanish population. The media and the elites, who are always keen to handle our Europeanist feelings, needed a coup de grâce to redeem the EU.

The EU is the Vienna Congress of our era, a pact of the European oligarchies to sustain the project of the capitalist state in its neoliberal phase. The elites needed to play a liturgical drama that would confirm the faith of the citizenry in an EU discredited by Brexit and its inability to coordinate a concerted response to the COVID pandemic.

The agreement was hailed in the pro-EU media – that is, almost all of them – as a “Hamiltonian” moment, in reference to the US Treasury Secretary of the late 18th century who managed to get the US Federal Government to assume the debt that the states had been burdened with since the War of Independence. After the Coronabond fiasco, the European Commission had been authorised to issue debt which will be repaid with future increased contributions from the member states. An imitation of Eurobonds without a Common Treasury. But the Spanish media paid even greater attention to the 750-billion-euro package, Next Generation EU, which set aside 140 billion for Spain, the biggest beneficiary after Italy. The headlines and the TV news openings had managed to soothe the incipient Euroscepticism.

The size of the figures has been one of the most effective props for the EU’s fading image. But it is just smokescreens and mirrors. If you increase the degree of scrutiny the spectacular nature of the transfers gradually dissipates.

The 750 billion is in fact a generous rounding-up where the new programmes of the reconstruction plan but also others existing in the previous Multi-annual Financial Framework were put into the same basket. Two hundred and fifty billion euros are loans and the Spanish government does not want any of these. Of the 140 billion that the government triumphantly brought back from its negotiations in the Council, some 60 billion euros in loans must now be discounted. They came with so many strings attached that the Spanish government would rather not apply. It seems more prudent to resort to issuing Treasury debt at very low interest rates since the European Central Bank (ECB), for the time being, is prepared to buy these loans. This has already prompted a reaction from senior European officials. Reuters citing ECB sources reported that bank officials are contemplating becoming less complacent, forcing Spain and Italy to accept these loans. For Northern Europe, the moral hazard of financing through government debt purchases and transfers to southern states is unacceptable. It is foreseeable that the pressure to accept funding instruments that reduce our sovereignty will become increasingly overwhelming.

If we exclude loans, it is true that within the Next Generation EU we still find a 310 billion euro Recovery and Resilience Facilty for the whole on the union, a transfer programme – with still diffuse conditionality – that does interest southern governments. The Bruegel think tank thought that Spain would receive 57 billion euros in the period 2021 -2023, 70% in the first two years. Half of that amount would have been 20 billion by 2021 that could have been used for a discretionary fiscal impulse. In its preliminary draft general budget a chapter on Next Generation EU is included which estimates a figure of 27 billion euros, approximately 2% of Spain’s GDP.

The problem with this figure is that it is also a smokescreen that hides the fact that Spain has to contribute additional resources to the EU budget. It is estimated that it will contribute 36 billion euros to finance Next Generation EU although part of this payment will be deferred to the future when we contribute our share of the debt repayments assumed by the European Council.

The net impact of Next Generation EU for our country would therefore be 21 billion, slightly less than 2% of its GDP over a three-year period. Divided by three it results in a few tenths of a percent of GDP each year. Clearly insufficient for the challenge of rebuilding an economy that is pathologically dependent on the tourism sector and was therefore so easily knocked out by the pandemic.

But these estimates we were dealing with in July have continued to wane.

A fortnight ago the government presented its draft general state budget for 2021 to the Congress of Deputies. In this document we read that the Government expects to receive transfers of 22.319 billion from the EU next year for all items, including the other programmes within the multi-annual financial framework such as the European Regional Development Fund, the common agricultural policy funds, etc.

In return, the Spanish state will increase its contribution to the augmented EU budget and will also have to cover the gap left by the United Kingdom and the discounts that have been skillfully negotiated by the frugal northerners (Holland, Austria, Finland and Germany). Spain’s contribution will increase from 1.2% of the Gross National Income to 1.40% in the new multiannual financial framework, to which must be added the new taxes planned by Ursula Von der Leyen, such as the one on single-use plastics. The draft general budget projects that the State will contribute 16.543 billion euros to the EU budget, 27% more than in 2020.

Outside the general state budget, 10 billion euros will be collected to finance the autonomous communities. If we add them up we would be talking about 16,788 million euros, a not insignificant amount but far from the figures used in the headlines of the news programmes. But in reality 8 billion euros will be anticipated by the Spanish state because it is not known when the funds will arrive from Brussels.

In short, the Spanish state forecasts that the net financial balance in Spain’s favour in 2021 will be 5.576 billion, a meagre 0.5% of our gross domestic product.

An analysis by Bruegel partly explains the mystery: the slowness of the European decision-making process – the European draft budget still has to go through parliamentary procedures in all member states and back to the EU Parliament and the Council, where it could be further watered down – combined with the difficulties that states have in implementing their projects lead Bruegel to conclude that up to three quarters of the Next Generation EU funds will not be disbursed until 2023. Therefore the amounts in the Chapter for European reconstruction funds cannot be recognised as income in the next budget. In its preliminary draft budget, the Government tells us that the appropriations for Next Generation EU will give rise to a “corresponding appropriation when the funds are available during the financial year”. A sober analysis of the numbers reveals that Pedro Sánchez had exaggerated the size of his victory.

But the crisis is today, not two years from now!

This only allows us to conclude that Next Generation EU is not a plan to rebuild the economy of the southern countries but a propaganda project. In the 1990s, public works were always advertised with a large poster informing people that this or that project had been financed with European funds. It mattered little that, even in those years when Spain had the highest favourable balance with the European Economic Community, this never exceeded a few tenths of a percent over 1% of our GDP; in the collective imagination of the population we have built our roads with European money and are therefore indebted. The sleight of hand was that the money had left Spain and then returned under the heading of a large blue sign with a ring of stars. The low self-esteem of the Spaniards did the rest.

This trick is not innocent: by entrusting Brussels with the management of our budgets and leaving the Commission to define the criteria for distributing the funds, the Spanish Neoliberal Capitalist State takes away from the democratically elected bodies the decisions on what resources are mobilised in our economy.

The greatest threat to the Green New Deal lies in the financial sector, which aims to shift the costs of climate change onto society’s shoulders while taking large profits for itself. Nick Shaxson is an […]

This is a development that is worth following worldwide. Gary Hufbauer is a non-resident senior fellow at the Peterson Institute of International Economics (PIIE) Euijin Jung is a research fellow at PIIE Cross.posted from East […]