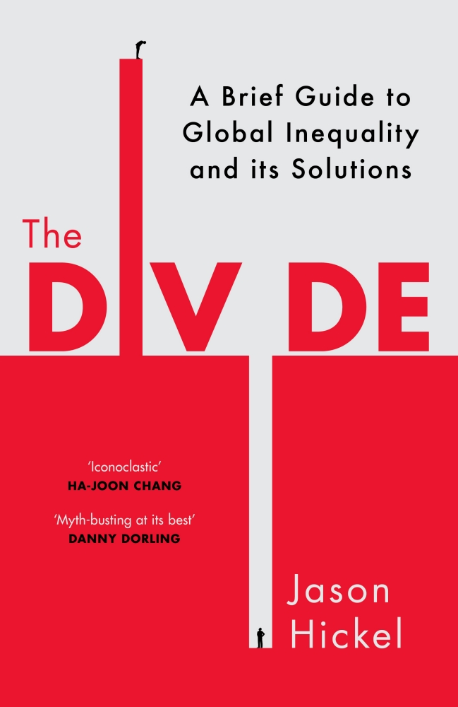 The subtitle of Jason Hickel’s book “The Divide” is something of an understatement. The book is neither brief, nor is it a guide. Instead Hickel has written a brilliant and lengthy compendium of the structural inequalities maintaining, even increasing, underdevelopment in poor countries. He has marshalled the newest facts, analyses, and theories concerning economic inequality between rich and poor nations, destroying current myths about development. He brings the reader up to speed with regard to current neo-liberal strategies and their accompanying propaganda to further the dominance of rich nations, or better said their transnational corporations. He does this in a lively narrative over 300 pages.

Hickel, an anthropologist at the London School of Economics, addresses his topic systematically. He begins by exposing the concept of development in the Third World, a rabbit pulled from a hat to pad out the inaugural address of the American president Harry Truman in 1949. The idea caught the imagination of citizens of wealthy nations, not only confirming their superiority ethics and efficiency as advanced economies, but offering them the opportunity to exercise Christian charity. Since then these countries have run with the story, each generation retrofitting it with its own ideological ballast, yet gaming the system of iniquity and inequality.

Current examples are Bill Gate’s foundation, “which profits from an intellectual-property regime that locks life-saving medicines and essential technologies behind outlandish patent paywalls”, or Bono, who has prolifically used the tax haven system “that siphons revenues out of global South countries”. It is the old American Robber Baron philanthropy in hipster garb.

The Author then goes over to myth busting mode. Successes in combatting poverty turn out to be manipulation of data to achieve the desired result, having little to do with reality. If you take China, whose success in reducing poverty has little to do with foreign aid from rich countries, out of the equation, the situation has otherwise further deteriorated. In fact the ”generous” aid provided by wealthy nations is a pittance compared to the wealth being extracted from the recipient countries and flowing into the economies of rich countries or tax haven accounts.

These inequalities were not always there. Hickel continues by reviewing the rise of imperialism, its tools of wealth extraction in the colonies and how this system has been modernised and expanded following the termination of formal colonialism following the Second World War.

Initially the post-colonial era increased development and prosperity in regions of the global South thanks to “devolopmentalism”: Adopting relatively high trade tariffs on foreign goods to nurture domestic industries, restrictions on capital flows, and limiting foreign ownership of national assets. Land reform was often an integral part of the strategy. Politically these countries organised themselves in the Non-Aligned Movement.

As these nations began asserting themselves and nationalising their land and resources, thus threatening the interests of transnational corporations, the “Age of the Coup” began. The Americans, British or French no longer sent their troops and warships to enforce their economic interests. The former colonial masters corrupted the native military, which toppled their democratically elected governments and installed dictatorships. Western nations conveniently ignored these – as long as they did their bidding.

In the course of time coups no longer harmonised with the Western discourse of freedom and democracy in its conflict with the Soviet Union. They developed methods of gentle, but iron-fisted coercion.

Foremost of these is debt. As we recently experienced with Greece, the Third World Debt Crisis was a crisis of Western banks, which had recklessly leant vast amounts of money to developing nations. To save the banks, the International Monetary Fund was rebooted to make the creditor nations prioritise repaying bank loans. It was later joined by the World Bank in enforcing debt repayment. The two institutions imposed “structural adjustment programmes”, consisting of austerity, privatisation, and liberalisation. The damage this did to the people and economy of these nations was irrelevant. Hickel terms this the “invisible coup” because it appears voluntary, a programme approved by democratically elected governments to reintroduce virtuous economic policy. The pernicious results repeated themselves throughout the world. In the meantime this neo-liberal policy has been reimported to the Western, with equally ruinous effect upon the majority of the population. This received an inestimable fillip following the Great Recession.

Other weapons in the arsenal of the rich nations include trade agreements, which have benefitted the industrial nations of the West. The World Trade Organisation institutionalised the enforcement of trade-related aspects of intellectual property rights, which have allowed Western monopolies such as pharma to gouge consumers worldwide.

Another tool is the International Centre for Settlement of Investment Disputes, secret extra-judicial tribunals whose decisions override the laws and courts of sovereign states in furthering the interests of transnational corporations.

A more informal method of bleeding developing nations, but also Western nations, of their wealth has been the creation of tax havens, allowing international corporations to surreptitiously transfer illicit gains around the world, free of control, not to mention taxation.

Hickel concludes with a raft of suggestions for changing this skewered system. Many of these, such as recovering the commons, abolishing investment settlement dispute tribunals and tax havens are just as relevant for wealthy as for developing nations.

The forcefulness of this book lies in the author’s ability to bring together so many elements, including their interdependence, in a trenchant and cogent narrative.

Book Review by Mathew D. Rose “Forlorn Hope” was a British military term from the seventeenth to early nineteenth century for a group of soldiers chosen to take an extremely hazardous role in a military […]