Finally exiting the EU is a tremendous achievement for democracy. Nonetheless, Boris Johnson’s Brexit is clearly not the “Full Brexit” for which we have been campaigning. Instead, it seeks to downplay or manage away its radical potential. Truly realising that potential remains a task for the future. 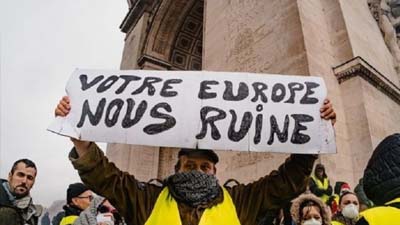 Today, Britain will finally leave the European Union – a staggering 1,316 days after the 2016 referendum. This is obviously to be welcomed. It often seemed that the Remainer establishment would successfully block this outcome, with disastrous consequences for British democracy. Our fellow citizens, especially working-class voters in the Midlands and North, prevented that happening. Uniquely in Europe, they have forced their ruling class to adhere to a referendum result that upset the EU project. And they have forced politicians to listen to their wishes, and to be accountable to them.

Nonetheless, Boris Johnson’s Brexit is clearly not the “Full Brexit” for which we have been campaigning. Instead, it seeks to downplay or manage away the radical potential inherent in breaking from the EU.

We launched The Full Brexit in July 2018 to stand up with and for the vast majority of British citizens who either voted Leave in June 2016 or, as democrats, were committed to enacting the majority verdict. We felt that there was a widespread hunger for popular sovereignty, greater democracy and economic renewal, to which the political establishment – clinging to the status quo or adopting a “damage limitation” approach to Brexit – was simply not responding. Members of our network set out more radical proposals, including fundamental constitutional change, the extension of public ownership, deep economic reforms, and measures to extend popular sovereignty.

With respect to popular sovereignty, Johnson was only able to achieve Brexit through the depoliticising slogan of “Get Brexit Done”. A full Brexit would have channeled people’s desire for greater control over the conditions of their everyday lives and the state. It would have involved keeping people politically engaged and mobilised while creating new institutions to allow them to “take back control”. It is hardly surprising that the Tories’ Brexit falls well short of this, instead seeking to neutralise the transformative potential of Brexit. “Get Brexit Done”, with its air of exhaustion, signifies an attempt to move past Brexit then return to business-as-usual, with government more attuned to the so-called “people’s priorities”, but with the people themselves playing no greater role than before. The slogan actually conceals a lack of political vision for post-Brexit Britain, even for the party most committed to breaking from the status quo.

On democracy, Johnson’s Brexit is again an attempt to depoliticise and evade key questions. Leaving the EU is itself a step forward for democracy, because it allows parliament to determine Britain’s own laws and makes political leaders solely accountable to their electors, rather than their European counterparts. However, the Brexit process has also raised fundamental questions about British democracy: the fitness of political parties to represent citizens; the dysfunctionality of parliament; and the desirability and legitimacy of the House of Lords, the monarchy and the Supreme Court. Virtually no institution has been spared. Yet we cannot expect the Conservatives to enact sweeping democratic change.

The Tory manifesto acknowledges some of these dysfunctions, but is predictably light on how to address them, beyond vague promises of “full devolution for England” and a new Constitution, Democracy and Rights Commission. The latter allocates fundamental democratic questions to an unelected committee of the “great and the good”, which seems highly unlikely to propose sweeping change. Something very similar was pursued by Tony Blair’s government under the rubric of “modernisation” – and, if anything, this coincided with the de-democratisation of public life.

It would be foolish to expect the original establishment party to advocate for the abolition of the House of Lords, say, let alone the monarchy. Proposing to relocate an unelected chamber to York only converts a demand for meaningful democracy and popular empowerment into a culture-wars gesture – shifting institutions away from “metropolitan” London. We also cannot expect the Tories to extend workers’ rights to organise democratically in defence of their interests, let alone to take charge of their daily lives. Although Johnson’s Brexit is unlikely to involve the bonfire of workers’ rights predicted by Remainers, nor will it extend them. The Tories plan, at best, minor improvements for the lowest-paid, while attacking independent working-class institutions like the Rail and Maritime Transport union.

These democratic limitations apply most forcefully to the Tories’ plans for economic renewal. These entail changes to the organisation of British capitalism but no reining in of private power, let alone moves towards economic democracy. The Johnson government will break from previous austerity policies, increasing public spending and investing in regional infrastructure and vocational training while regenerating town centres. It may even sacrifice a close economic partnership with the EU in order to diverge from EU laws, which constitutionalise neoliberalism. However, they will not move to place the economy under greater democratic control. The Tories’ economic plans explicitly celebrate and rely heavily on the private sector, entrepreneurship and the profit motive; they just hope to redirect growth into “left behind” areas in order to consolidate their electoral grip. No shift in ownership or control is envisaged; the economy remains privately owned, and any public benefit will be a fortunate by-product of private enrichment. Some control over regional infrastructure planning may be delegated to city-regions, but local administrations, emaciated by a decade of austerity and promised no new funding, can do no more than seek to create conditions amenable to private capital accumulation. The bailout of struggling airline FlyBe signifies the fundamental relationship: the state keeps private enterprise afloat, but with no extension of democratic control over it. Instead, the British state remains subordinate to capitalist power and interests. Nothing has been learned from the global financial crisis, and we can expect a similar response from the British state to the next crisis.

The Conservatives’ fetishisation of free trade also reflects their lack of economic vision and commitment to democratic control. Although the EU has been the primary way in which the British economy is de-democratised and neoliberalism hardwired into public policy, it is far from the only way. The World Trade Organisation, the property rights regime of the European Court of Human Rights, investment treaties, and the global network of judiciaries committed to enforcing these, also entail fundamental restrictions on how democracies can manage their economies. Not only will the Tories not roll back these restrictions; they will deepen them through bilateral free trade agreements. The idea that liberalising trade will automatically entail substantive economic development is also deeply misguided. As Britain’s own history shows, it is often connected to premature de-industrialisation.

The Leave vote was a democratic moment but did not express a democratic movement – and that remains true today. The democratic hunger and commitment of millions of British citizens – particularly working-class voters – is inspiring. They voted three times to “take back control” and defend the value of their vote: in the 2016 EU referendum; in their support for parties promising to honour the referendum result in 2017; and in their rejection of Labour and the Liberal Democrats’ transparently anti-democratic stance in 2019. In a long struggle that should inspire the whole continent, they have shown that Wolfgang Schäuble and Jean-Claude Juncker are wrong to insist that “elections change nothing” and that “there can be no democratic choice against the European treaties”.

Nonetheless, the political space opened up by Brexit could only ever be partially exploited by a party of the right. The real prize was there to be seized by the left. Its failure to do so is the real tragedy of the last three-and-a-half years. The democratic mantle of Brexit remains to be taken up by radical forces in the future.

It is fascinating to observe that hardly anyone understands that corruption has become globalised. Everyone believes that their nation is especially corrupt. There is a worldwide web of corruption Anyway, here is Version UK Patrick […]

How the USA went from engagement with China and Russia to containment. Michael Roberts is an Economist in the City of London and a prolific blogger Cross-posted from Michael’s Blog Image: State Emergency Service of Ukraine/Wikimedia […]

Branko Milanović – On the role of economics and global inequality

How economics help us to understand political and social movements Branko Milanović is an economist specialised in development and inequality. His newest  book is “Capitalism, Alone: The Future of the System That Rules the World” […]