Steve Keen did it again. This Manifesto is a lucid deconstruction of fallacies in neoclassical economics, a reflection on its puzzling persistence, a passionate plea for another kind of economics, and a demonstration of the hands-on creation of that alternative in two areas, monetary economics and environmental economics. All this comes in a slim volume of less than 160 pages, with copious notes and extensive references added. The book is at once accessible, engaging, and scholarly. The breadth of Keen’s reading and analysis is impressive, ranging from the earliest history of economics to the profession’s latest newspaper polemics, from population biology and complexity science to implications of the Second Law of Thermodynamics, and from the primeval origins of money to the latest fashion in Modern Monetary Theory (‘MMT’). 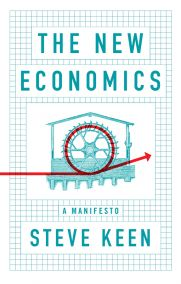 If I have some qualms, they are far outweighed by appreciation for the book’s merits. Neoclassical economics in this book is too massive and monolithic a field, perhaps even a straw man in places. Economics has become a good deal more diverse in recent decades than Keen makes out, also outside the card-carrying heterodox schools. Those are first and foremost, for Keen, the post-Keynesians but also the smaller Marxist, Feminist and Austrian schools. After the neoclassical heyday in the 1980s and 1990s – formative years, not coincidentally, in Keen’s career – the heavy hand of neoclassical assumptions and of its sine qua non optimising models has lifted somewhat. ‘Mainstream’ economics has embraced behavioural economics, policy experiments, big data pattern recognition, and other innovations both theoretical and empirical, which do not neatly fall into the neoclassical approach described by Keen. In fact, practitioners such as Kahneman and Duflo don’t care much about the mainstream-neoclassical distinction.

And on the other hand, there is in fact a ‘New Economics’ responding to Keen’s criticism in this Manifesto, other than his own proposed innovations. Notably, complexity is addressed in agent-based models, different from – though not inconsistent with – Keen’s dynamical modelling work. And econophysics incorporates a thermodynamic way of thinking albeit, admittedly, in microeconomic and not macroeconomic models. I would have welcomed a discussion of these innovations and a weighing against the criticism Keen makes. That said, I appreciate that a manifesto cannot be too balanced a book.

The book covers some of the same ground also contained in his best-known book ’Debunking Economics’, notably on the impossibility of constructing aggregate demand and supply curves from individual curves and the unrealism of declining marginal costs. But for readers of Debunking, this will not be a problem. These microeconomic discussions illustrate a macroeconomic theme that is developed in more detail and considerably updated compared to Debunking. This theme is the puzzling stagnation of neoclassical economics since – Keen claims – the 1870s, when the field took over intellectual leadership in economics from Classical economics. Even the Keynesian Revolution was not that, says Keen, since it was neutered by Hicks’ IS-LM presentation and (I would add) by the Neoclassical Synthesis leading to ‘New’ Keynesian macroeconomics that followed in the 1990s.

This continuing dominance and damage of neoclassical economics is a theme pervading the whole book, and Keen’s impatience – in fact, rage – with their practitioners is palpable. Its causes are most explicitly discussed in the introductory chapter, which explains the need for a new economics. Using Kuhn’s framework of scientific revolutions, Keen traces the development of economics, comparing it unfavourably with physics. Physics has different theories for different domains, but they are not mutually incompatible. In economics, mutually inconsistent theories continue to coexist. In physics, the incumbent professors also hate to admit defeat, but they have to since the experiments which prove them wrong cannot be ignored. Not so in economics. There are no true experiments, and the evidence that does exist – history – is easier to ignore as time goes by. History, unlike experiments, cannot be repeated to drive out false ideas and so they persist – until history does repeat itself, or in any case, rhymes enough to expose again the fallacies of neoclassical economics. These are the times (the 1930s, the 1970s, the 2010s) when it was battered but not replaced, and a new period of forgetting starts. Thus Keen.

Much of this rings true, though Keen’s orientation on the sciences is at odds with the nature of economics, which is a social science. Seen this way, the multiplicity of theories, articulating radically different views of society, is not an aberration but a necessary feature of economics, just as it is in political science, anthropology, and sociology.

Keen’s approach to economics however is the method borrowed from physics: model it mathematically in order to understand it. He is an excellent writer and teacher, also for those who feel uneasy around equations. In fact, there are hardly any in the book. Almost all of the explanations of models are verbal, with the help of graphs and figures. This is a huge achievement in itself. His empathy with non-initiates shows in remarks such as ‘If you don’t have mathematical training, this might be a good point to take a coffee break (when explaining chaotic behaviour, p. 88).

In his second chapter ‘Money Matters’, Keen translates rival theories of money into the terms of his own modelling software – called ‘Minsky’, after the great financial economist – to show that money creation by banks ’ex nihilo’ has macroeconomic significance. The arguments are laid out crystal clear, though the ‘Minsky’ tables that illustrate this are not. Keen has done original work in this area himself, for instance showing how credit creation is compatible with the existence of profit. He also highlights the need for complex and system-level models rather than linear or micro-founded models. He uses this to understand Minsky’s financial instability hypothesis in modelling terms, something he first did in a breakthrough 1992 paper. His ‘Minsky’ modelling software is available for free, and continues to be improved. Like other so-called ’stock-flow consistent’ dynamic models, this approach could become the future standard for generic macroeconomic modelling.

The paramount importance of complexity science not just to understanding financial crisis but to all of macroeconomics is the topic of the next chapter. Keen argues coherently that the economy’s behaviour cannot be deduced from its constituent parts; it has emerging properties, so that the whole is more than the sum of the parts. This stands in stark contrast to the textbook way of thinking in terms of firms and households. Keen starts from the simple examples of predator-prey models to demonstrate how it might be enough to define the key economic ratios – such as employment-to-labour-force and debt-to-GDP – and then specify their dynamics, to reproduce and research macroeconomic data. Again, this builds on his own original work on so-called Goodwin models, and Keen does not eschew details such as attractors and complex numbers – coffee break time again for some, he notes.

The chapter on climate science is perhaps the most innovative, and it is what Keen is currently working on. This shows in the somewhat rudimentary state of his central innovation, which should really be further developed. The upside is that the reader has the sense of peeking into the kitchen of new economic thinking. That central innovation is adding energy to production functions, not as a third input, but as a multiplicative term to capital, so that a non-linear model results.

With this in hand, Keen can explain why economic growth is not only financially unstable but physically unsustainable. Here Keen benefits most from his wide reading in the sciences. Production theory which ignores energy as input, or which pretends there is no energy waste in the production process, clashes with the Second Law of Thermodynamics – in the real world, an impossibility.

He justly ridicules the conventional wisdom of mainstream climate economists, among them William Nordhaus who received the 2018 Nobel Prize for his efforts. Their assessment of the damage done by global warming is dramatically more optimistic than what scientists predict. A six degrees Celsius rise in temperature compared to pre-industrial levels would result in only 8.5 percent less output, Nordhaus and colleagues wrote. How so? They arrive at their pronouncement by using current correlations between temperature and economic activity, projecting this into the warming future as if there were no tipping point and taking no heed of the science that says otherwise. In fact, as Keen shows, they cite and then flatly contradict the scientists. It’s hard to see how this was done in good faith. Another reason why Nordhaus and colleagues can be so sanguine is that they assume that all economic activity that does not take place outdoors (which most does) won’t suffer from climate change. The mind boggles at such naivety.

Even granting that Keen’s representation is not balanced, nor friendly, there seems to be no excuse. The obscurantism is frightening, yet these ‘findings‘ made it into the 2014 IPCC report. One can only hope that such climate ’science’ will soon be discredited (and that Nobel prize returned). It comes as no surprise that Keen’s penultimate chapter is called ’The neoclassical disease’. The final one: ‘Be the change’.

This book is an advertisement for interdisciplinarity and a very, very good read. Steve Keen is still going strong, both in lambasting neoclassical economics and in breaking new ground. Let others add balance to the discussion and change the academic world from within. We need Keen to keep the pressure on.

The New Economics. A Manifesto by Steve Keen

The many in one: A review by Branko Milanović of Amartya Sen’s “Home in the world: A memoir”