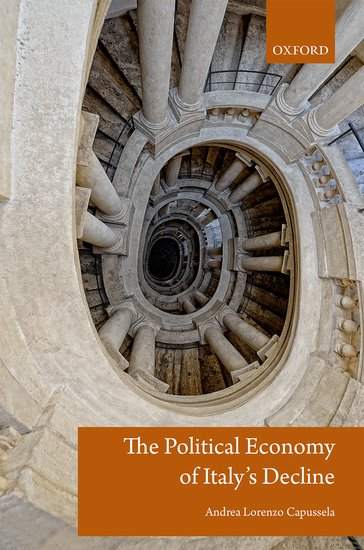 Andrea Capussela has a tale to tell – and he does it well. This book could not have appeared at a more opportune moment as it seeks to illuminate Italy’s Byzantine world of politics and economics, providing lucid insights. It is a sobering account and the author pulls no punches with his straightforward narrative.

But first, a warning: the book is written in academic format. The first four chapters (approximately a third of the book) are about methodology. Of course one can ignore them and go straight to the analysis. But Capussela is not writing from an academic ivory tower, he has both feet planted firmly on the ground. He may owe that to his experience as head of the economics unit at Kosovo’s International Civilian Office (from 2008-11), followed by his role as an EU adviser to Moldova’s economy minister. After such experiences, one surely has no illusions about politics and economics. Capusella manages to integrate this into his methodology, providing a number of truly interesting and radical theoretical insights, worth perusing, even if you are not an academic.

Capussela’s tale is of Italy from 1945 to the present and why what appeared to be a promising economic beginning after the Second World War finds the nation in crisis today. It was this post-war period that led to the current desolate situation. Italy, which changed sides during the war, joining the allies in the last moment, was not forced to break up its political nor its economic fascist structures (corporatism). The Cold War did the rest, since the United States had less interest in democracy in Western Europe than in supporting such stable, anti-communist structures. This resulted in an “Economic Miracle”, whereby Italy was one of the fastest growing economies in the world, even overshadowing Germany, but with a weak political renewal, in which ideology was more important than political pluralism. Although there was a strong progressive element, as the Resistance Movement transformed itself into a political force, it was the former fascists and capitalists who were to take power and hold onto it for decades. They subverted democratic and economic reforms to prevent any real political challenge to the established order. Capussela sees this lack of these necessary reforms as a “spiral”, with clientelism and corruption increasingly rotting away Italy’s political economy. Thus Italy did not manage “the transition from an illiberal, hierarchical society, as it still was in 1945, to an open liberal democracy governed by the rule of law and served by an economy driven by competition and innovation.”

Why then did Italy’s economy initially do so well for decades only to fall into today’s abyss? Firstly, following the war, there was a parallel process in politics and the economy to create a more socially and politically inclusive society (although the conservative elite constantly sought to obstruct the socialist movement). Democracy began with the introduction of the universal vote, while the economy was modernised. An attempt at land reform by progressive forces was flanked with a new industrial policy: this principally agricultural country was ripe for industrialisation. Parts of it were successfully modernised, thanks to some progressive economic institutions marked by their integrity, such as the state industrial holding Istituto per la ricostruzione industrial (IRI formed during fascism). The public sector and its industrial holding, as well as the private sector, invested in purchasing patents and developing their technology, resulting in phenomenal increases in productivity.

But the old fascist and corporatist establishment saw this as a threat: they were more interested in preserving their privileges than modernisation through creative destruction. The backlash came not only from industrialists and large property owners, but also from the conservative political parties led by the Democrazia Cristiana. These conservative political parties created a system of inclusivity based on patronage, providing increasingly larger groups with advantages and public funds (this included the mafia) in return for political support. Such a pervasive system of corruption, built up over decades, has won over swathes of Italian society, providing them with privileges “valuable enough to align their (narrow) self-interest to that of the main beneficiaries of the status quo”. This was fatal for democracy and the rule of law.

By 1990 Italy had lost its “social capacity” for growth, owing to a lack of change in public policies and institutions, and to a commercial sector competing more on costs than on innovation and investment. Attempts at reform were effectively blocked to protect rents.

There was a brief hope that the spiral might be broken, with prosecutions of the mafia and mainstream politicians for corruption, in 1992-1994. But this was apparently too much creative destruction for the Italian people, who then put an end to any possible positive reforms when they elected the television magnate Silvio Berlusconi as prime minister in 1994.

Since then political parties have increasingly severed their links with society, instead closing ranks with what Capussela calls the “distributional coalitions and economic elites losing autonomy vis- à- vis both”.  Add to this the fact that the mainstream media is controlled by finance and industry; there is currently not much room for democracy, social reform, or economic innovation.

Corruption, and  misallocation of resources, have clearly become an integral part of Italian society. The Italian economy is on a downward spiral just as globalisation is pressing it to be more competitive.

Capussela`s conclusions are anything but sanguine:

The tale that Andrea Capusella paints does not leave much room for optimism, but somehow he keeps finding hope for Italian society.  Maybe because it is his society and his nation and none of us want to give up on these, even at the worst and most confused of times. For the reader, Capussela certainly offers a journey through modern Italian politics and economics well worth taking.

The Political Economy of Italy’s Decline by Andrea Lorenzo Capussela

The EU has spent billions on state-building in Kosovo. Now this. Andrea Lorenzo Capussela led the economic and fiscal affairs office of Kosovo’s supervisor, the International Civilian Office, and is the author of State-Building in Kosovo: […]

Book Review by David Shirreff The reaction of ordinary people to globalization gets the blame for many upsets including, for example, the surprise election of Donald Trump in America in 2015, and Britain’s “Brexit” vote […]