So, we have reached the point where EU citizens have to go to foreign nations to seek justice. 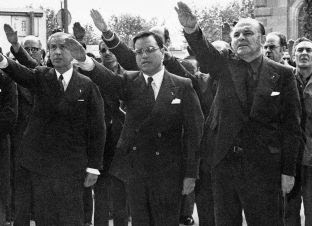 In the middle is Martin Villa

In all probability, ex-Francoist minister Rodolfo Martín Villa (85) will one day die placidly in his bed, as Franco did, without having been prosecuted for numerous crimes committed during Spain’s transition to democracy. However, there is still one slim chance that the so-called “Querella Argentina” (the Argentinian law-suit) may be the first occasion on which a handful of Francoist criminals – whom no Spanish judge ever successfully managed to prosecute – will be tried in Buenos Aires, to the intense embarrassament of Madrid. The hearings started this month.

Though painstakingly slow, a process whereby Francoist criminals may finally be tried for genocide and crimes against humanity, with the support of Amnesty International, is under way in Argentina. Opened ten years ago under the principle of universal jurisdiction, it began with just two prosecuting parties, a number which has now increased to over 350 in representation of about 1000 victims. Last September 3 finally saw the first court hearing for defendant Martín Villa, under the auspices of judge María Servini, albeit via videoconference from Madrid. It was indeed a historic moment defiantly faced by the ex-minister of the Interior who protested to the judge that it could not be proved that he and others had committed “genocide” in those dark years.

Rodolfo Martín Villa was a minister in the transitional period between the Franco regime – which had a particularly crude ending – and the establishment of the current constitutional monarchy (whose critics refer to it as the “Regime of 1978”). Thanks to the amnesty the Francoists granted themselves in 1977, he was later able to reset his CV and cynically cast a public image of himself as a “key contributor to democracy” (sic). France’s Pierre Laval was not so lucky. Indeed, fascist Martín Villa, with a gruesome past that would appall any self-respecting democrat, was sly enough to have his true identity swept under the carpet with the unhesitating aid of the patrons of the new regime.

For many years, Martín Villa had been known as the “Truncheon of the Transition” for the hard repressive line he utilised. Along with Fraga Iribarne – a Francoist minister of a similar profile – he had been directly involved in the deaths of as many as 13 political opponents, amongst whom was Germán Rodríguez, who was shot in the head during the San Fermin festival when the police opened fire on those calling for amnesty in and around Pamplona’s bullring. Even more dramatic was the famous Vitoria massacre, in 1976, when five strikers were gunned down outside a church from which they had been ousted from a sit-in by tear-gas fired by the police through the church’s windows. Labour minister Martín Villa managed to shirk all reponsibility for that too. Later, during his term of office as Interior minister, as many as 41 people were killed by the Police and a further 17 by fascist terrorist groups who are suspected to have enjoyed special police and judicial protection. Not only did Martín Villa manage to shirk off any personal responsibility for all these deaths, but he also made sure that those directly responsible for violent police operations got off scot-free (including one Police head subsequently declaring that those deaths would serve as a “good lesson” for future political opponents). Furthermore, as minister of the Interior in 1977, he had the Stasi-type archives of the fascist Movimiento burned – to avoid any investigation into its sinister activities – a crime that should have cost him a 12-year prison sentence according to Spanish law. Again, that self-applied amnesty ensured that it was to have no consequences for him.

Despite the serious nature of the accusations made against him, Martín Villa gets wide support today from key Spanish personalities and groups as judge Servini prepares to try him. This support not only comes from the far right, but across most of the political spectrum. Only Podemos, and the Catalan and Basque parliaments, expressed their support for the Querella Argentina. To explain the laundering operation Martín Villa has been blessed with, it cannot be overlooked that he is owed many favours as a true server of the Franco regime and its chameleonic transfiguration into “democratic” Spain. Just before the hearing, no less than four former presidents – Felipe González, José María Aznar, José Luis Rodríguez Zapatero and Mariano Rajoy – came out in support of Martín Villa by signing a letter. To show just how tragic the situation is, even former trades unions leaders came in on the act.

Significantly, the political figure most criticized for signing the letter was to be Josep Borrell, the current Council of Europe’s Vice-President responsible for the EU’s external action. To a question raised by several MEPs, an EU spokesperson had to fall back on the poor excuse that he had signed it before taking up office. The fact remains that Martín Villa’s star defence statement before judge Servini was bolstered by quoting Borrell for having defined Villa as “a key figure in politics who made Spanish democracy possible” (sic). It is a statement which when uttered by a high-ranking EU oficial, throws fresh Spanish dung onto the EU as an institution. It also adds insult to injury when we consider the hundreds of innocent victims he caused and the intense activity he indulged in when covering up for Franco’s criminal record. Try as he may, he never managed to do away with all those photographs of him unashamedly raising his arm in the fascist salute well into the 70s, a venial sin the International Olympic Committee was also to overlook on Juan Antonio Samaranch’s track record.

That all this should be tolerated in Spain is no news. What remains to be seen is whether the EU will one day consider if Borrell, that outspoken Spanish nationalist, is the right man to be handling its foreign affairs. One thing is to show a reconciliatory attitude to events in the past and quite another to cover up for a fascist criminal. By signing that letter, as he did, Borrell is indirectly applauding the uncanny merger of democrats with the Francoists to create the “new” Spain, knowing full well that the latter would retain so many of the key cards in the new State thanks to the immunity they enjoyed. The EU must understand that to applaud such a development is effectively a direct attack on human rights, democratic standards and any attempt to put an end to Francoist impunity.

Argentina’s judge Servini is at present the only small hope humanity has of seeing Martín Villa and other Francoist criminals judged before they all die in their beds. Unfortunately this will no longer be possible in the case of policeman Juan Antonio González Pacheco, alias “Billy el Niño”, who died last May of Covid-19. Democratic Spain had done nothing to withdraw the medals and handsome prize money he received monthly after a long career of persecuting and torturing democrats, trade unionists, and opponents of the Franco regime. Neither king Juan Carlos nor Felipe VI ever moved one finger to have this kind of behaviour corrected, nor indeed punished. All of which serves to understand just what Spain is today, making it difficult for local journalists to overlook issues that our European colleagues were beginning to regard as obsolete in the last quarter of the XXth Century. Maybe judge Servini, despite all the pressure laid on her, will be able to set things right, albeit it in a moral or symbolical sense. Meanwhile Brussels will once again resort to patting poor old Spain on the back and showing infinite comprehension for an inborn tolerance to fascism that would be considered absolutely unacceptable in most other scenarios.

Jonathan Cook – Is it already too late to say goodbye?

This is a very poignant piece, as we consider Jonathan one of those few journalists with credibility. We are seeing many such websites closing down. One does not launch these websites to end up begging […]

The result of Germany’s general election was not what pundits had expected (and hoped for). While the hubris of Europe’s poltical establishment continues unabated, reality ruins the Chancellor Merkel celebation. Mathew D. Rose is an […]