The climate rollback in the EU continues as leaked documents show UK power plant Drax is at the heart of lobbying efforts to dilute EU biodiversity rules that could limit its supply of wood. 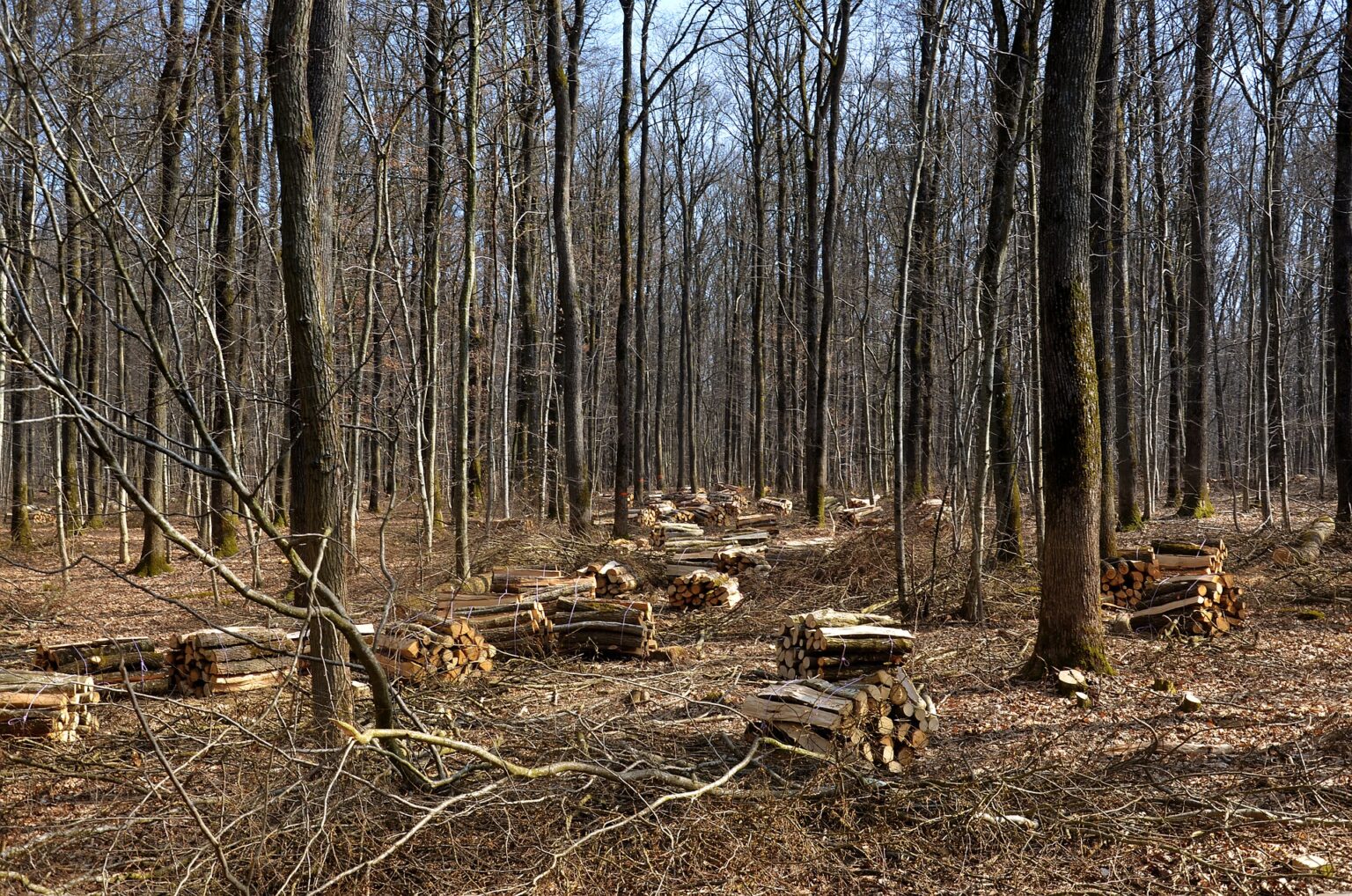 A powerful US biomass lobby group is pushing for a raft of changes that would weaken European renewable energy rules geared to better protect biodiversity and tackle climate change, DeSmog can reveal.

Leaked documents shared with DeSmog show that Yorkshire wood-burning power plant Drax is at the heart of the effort to water down EU sustainability criteria.

Campaigners say that the proposed amendments pose an “existential threat” to the company, which in 2021 produced nearly 13 percent of the UK’s renewable electricity through burning wood pellets.

The lobbying by US Industrial Pellet Association (USIPA) comes at a time of intense debate over the future of energy. The European Commission pledged to cut its reliance on Russian gas by two-thirds after President Putin’s invasion of Ukraine. The International Energy Agency has also recommended “maximising” bioenergy – which derives from burning organic material for fuel.

USIPA, whose members include Drax and top pellet producers Granuul and Enviva, sent the document to select MEPs in early March.

In it, the industry group appears to push back strongly against rules that might limit its supply of wood – including opposing the European Commission’s proposal for a no-go area for sourcing biomass from virgin and highly biodiverse  forests.

USIPA also attempts to establish in law that old, or misshapen trees should be used to make pellets, and suggests that companies should still be allowed to harvest wood from countries with national plans for timber and forest management deemed inadequate by the EU.

Analysis of the leaked file’s metadata, which targets proposed revisions to the European Renewable Energy Directive (REDIII), reveals one of the authors as Tanisha Beebee, Drax’s government policy manager. Drax told DeSmog it was one of ‘multiple industry partners’ that contributed to the report.

Europe is the leading consumer region of wood pellets globally. And Drax is the world’s largest biomass-burning power station, burning 7.8 million tonnes of wood pellets in 2021. The company also manufactures pellets – it produced over three million last year and aims to double sales by 2030.

With biomass set to boom, analysts are warning against the rapid scaling of the industry. Tom Harrison from electricity think tank Ember, said the EU should instead accelerate deployment of “truly clean and sustainable” energy sources.

The European Renewable Energy Directive, or REDIII, is part of the European Green Deal, aimed at making a 55 percent cut to the EU’s carbon emissions by 2030 compared to 1990 levels.

The directive was first published in July 2021, with a pledge to “tighten the sustainability criteria for forest biomass” to bring it in line with the EU’s biodiversity strategy. Members of the European Parliament and the European Council are currently assessing proposed amendments to the revision, with committee votes held in May and July, ahead of a final plenary vote in September.

Bioenergy of all kinds – such as wood, biodiesel or biogases – currently makes up around 60 percent of the EU’s renewable energy mix. Burning wood provides around 30 percent of renewables and biofuels.

However, campaigners have long argued that burning wood should not be classified as ‘zero emissions’. The practice actually emits more carbon pollution per unit energy than fossil fuels, and, they say, forests regrow too slowly to offset these emissions, with newly planted young trees unable to absorb as much carbon as the older trees they replace.

Biomass has also raised concerns over potential harm to biodiversity. Loopholes in the current EU law allow for clear cutting of forests for fuel, as long as there is no ‘land use change’. Ecologists also warn against the practise of removing roots and stumps from forests, which could upset crucial carbon sinks in the soil, and destroy highly valuable microhabitats that thousands of species depend on.

And even old, damaged and rotten trees – which are often painted as waste, and fair game for pellets – provide a habitat for thousands of species including insects, birds, bats and squirrels.

The EU is aiming to better protect against some of these threats to biodiversity with the new, beefed up sustainability criteria within REDIII. So far, climate campaigners widely regard even the new proposals as inadequate.

Yet in the leaked document seen by DeSmog – a response from USIPA to proposed amendments advanced by Christian Democrat MEP Markus Pieper (Germany) and Renew Europe MEP Nils Torvalds (Finland) – USIPA rejects a range of proposals for safeguards, including around the harvesting of roots and tree stumps, and protecting primary forests from logging or being converted into plantations.

Martin Pigeon, forest and climate campaigner at NGO Fern, said that if accepted, the USIPA-backed recommendations would lead to the further growth of this “destructive, subsidy-hooked industry” at the expense of EU taxpayers, other wood-using industries and forests in Europe and abroad.

From Coal to Biomass

Drax claims to be the largest decarbonisation project in Europe since converting most of its coal units to burn biomass over the past decade. And in 2021 it received over £800 million in subsidies from the UK government to burn wood biomass for electricity.

However, Drax’s claims about decarbonisation are based on biomass being classified as a renewable fuel in the UK and EU – even though it emits more carbon emissions than coal and is the single biggest source of carbon dioxide in the UK. A report by Ember found that Drax is also one of the top five emitters in Europe of polluting particles from power stations.

Experts say any changes to what is treated as sustainable biomass in the EU would heavily impact Drax, which sources wood pellets from the forests of Estonia and Latvia. It also owns 17 pellet manufacturing facilities in the U.S. and Canada after acquiring Canadian pellet producer Pinnacle Renewable Energy in 2021.

“It is interesting to see how Drax, via USIPA, is lobbying for the weakest possible standards,” Almuth Ernsting, a campaigner at Biofuelwatch, said of the UK power plant, which has recently faced criticism for claiming to be ‘carbon neutral’.

“It is hard to reconcile these proposed amendments which Drax’s public claims about their commitments to environmental sustainability.”

“Lucrative subsidies for bioenergy are helping drive intensive logging in the EU’s last ancient forests,” she told DeSmog. “These are home to moss-covered giants and the wolves, lynxes and bears of Europe’s fairytales.”

The wood-pellet lobby group also opposes what one campaigner described as one of the ‘few meaningful’ EU reforms: the phase-out of subsidies for burning forest wood for electricity from 2026. The document shows the industry appears to be pushing for further support, with USIPA pushing to extend the deadline by four years, to 2030. Likewise a proposal to cap biomass use is rejected.

Analysts have also raised concerns about USIPA’s proposed amendments on biomass energy and carbon capture (BECCS) – a process through which carbon dioxide from burning wood pellets is captured and stored.

The current proposals outlined in revisions to the Directive already allow for wood-burning electricity plants to continue receiving subsidies beyond 2026, if they have submitted plans to build a BECCS plant. USIPA proposes that this be weakened to an assessment of ‘readiness’ for BECCS..

While the UK is no longer subject to EU law, analysts believe Drax’s pellet manufacturing business, as well as those of other companies represented by the USIPA, would be heavily impacted by whatever is decided in REDIII.

Harrison, from Ember, says there’s a strong chance that the UK will follow the EU’s lead, as even since Brexit, the UK has generally fallen in behind EU legislation on sustainability and biomass.

A spokesperson from USIPA told DeSmog the group was “fundamentally seeking to ensure new requirements in REDIII are feasible and applicable across all biomass sourcing regions”.

“We favour measures and amendments that address topics in a practical and meaningful way, yet also respect regional forestry practices and national competencies,” they said.

“At this critical time, new requirements that do not increase the sustainability of biomass while introducing unnecessary administrative burdens or uncertainty to the market, would be counterproductive toward achieving our climate and energy security goals.”

A Drax spokesperson said it was “normal practice” for trade associations to seek the views of members on responses in this way, and the company had shared Drax’s “data, experience and best practice with the European Commission to help deliver sustainability criteria that are ambitious, but workable for the industry”.

The spokesperson added that the company “supports efforts to increase renewables in Europe’s energy mix and believe sustainable biomass has an important role to play in delivering energy security and achieving climate targets as Russian energy imports are reduced”.

However Booth, from the Partnership for Policy Integrity, said the proposed amendments exposed a powerful lobby pushback against any rules that threaten to limit the industry’s supply:

“Some EU policymakers have finally woken up to what’s being lost and are trying to put those forests off-limits, but the American pellet industry and its EU allies see no problem in logging the planet’s last untouched forests.”

“Efficiency gains contribute to increasing production and consumption which increases the extraction of resources and the generation of wastes.” Sam Bliss is a wildly inefficient researcher, writer, gardener, and warehouse manager of Food Not Bombs […]