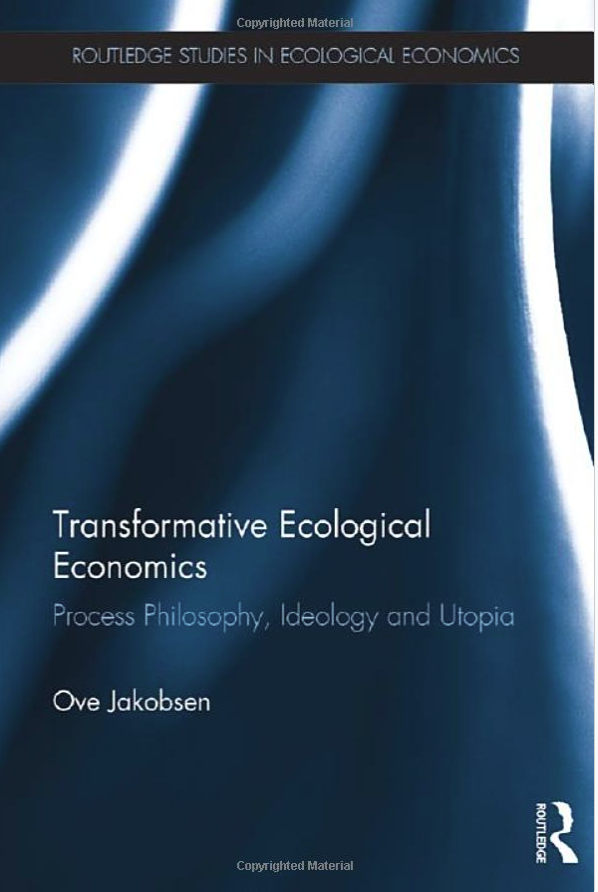 There are those who still quibble, but most now recognise that our way of living has brought us to the edge of a cliff, where the threat of global crises is real and grave. For the first time in Earth’s history, one species have managed to shift the living conditions of their own existence. In years to come, an overriding discussion will be on how we are going to solve the problems we have created ourselves. Is it enough to make changes within the framework of modern society, or do we have to think radically different?

I am one of those open to the idea that a green transformation of society may be necessary. I have, nevertheless, viewed ecological economy with a certain scepticism. There is a difference between assuming a critical position and proposing idealistic visions of a deeply ecological shift, radically different to the reality we currently live in. Such was my attitude as I read Economics Professor Ove Jakobsen’s Transformative Ecological Economics – despite this, the book was an interesting and educational encounter with radical, at times Utopian, but still realistic ideas.

Let us start with the book’s second part, where we are introduced to 32 different thinkers and their prospective projects. The portrayal spans philosophical and scientific sources of inspiration, via the meaning of interdisciplinary and viewing the economy as moral science, to institutional arrangements and concrete solutions measures. When a book sweeps across such a wide landscape, it is obvious that each presentation will only provide a tiny taste. Jakobsen stays away from the commentator role, instead introducing each perspective on its own premise. This feels like a liberating invitation to think for yourself. I read the book much in the same way you move around a film festival: from one point to the next, steadily given new angles on a comprehensive framework, a mosaics of impressions and ideas which preciselythrough their, often contradictory, composition, contribute to a deeper understanding.

A vital piece of Jakobsen’s mosaics is the awareness of modern society as saturated by a mechanical, instrumental and reductionist mind set – focusing on the individual parts and what we can do with them. An organic approach is taken into account, whereby nature, society and economy are interlinked in a dynamic whole. Such a change of mentality would impact our political thinking and the way we organise society. It would for instance have made us more conscious of the value of a circular economy, where production, distribution, consumption and recycling are connected in much closer cycles than today. In this, the point of local currencies becomes more understandable. It is not about abandoning global or national solutions, but to contribute to schemes that stimulate local financial cycles.

The first and third sections of the book have an entirely different format. The first part presents three analytical distinctions that shape Jakobsen’s text as a whole. The significance in moving from a mechanical to an organic understanding of reality is fundamental: Rather than viewing the world as many single objects, we ought to emphasise how everything is connected through dynamic relations characterised by continuous change. This leads on to an analytical divide between ideology (anchored in the preservation of the existing) and Utopia (the source for creating alternative narratives about a different future). Lastly, a divide between green and ecological economy is outlined. The green economy is seen as an extension of the existing order, designed to solve environmental problems through reforms. The ecological economy on the other hand, views the problems as an expression of a system crisis, only to be solved through fundamentally changing how we live.

Part one creates an interpretive context for what we read in part two, the 32 approaches I started off with. In part three, the various elements are joined together to a sketch of a transformative ecologic economy, a Utopia derived from a narrative anchored in the categories of worldview, economic system, business practices and human image. Faced with this mind set, my critical sense is re-awoken – but there is no doubt the book succeeds in showing the possibility of alternative thinking.

In is difficult to read Jakobsen’s exciting work without reinforcing it with my own book From Eternal Growth to Green Politics (Fra evig vekst til grønn politikk) (2016). Where I draw a historical-political map of a diverse landscape, Jakobsen assumes a much more defined position where he points out the direction for an alternative development of society. And whereas I am anchored in politics, from where I carefully write towards the economy, Jakobsen starts in the opposite end: his observations are based on the economy and the possibilities of transforming this, whilst the diverse and interchangeable play of politics and ideologies is hardly visible.

It is in this I where find my most critical comment to the book: the point of resistance, the existing order, is at times portrayed as too one-dimensional and caricatured. Where my book sheds light on a modern society on the cusp of various political discourses, Jakobsen writes about ideology in the singular – understood as a symbiosis of a mechanical world image, instrumental science and economic liberalism. This is undoubtedly significant and important. But – if we accept that reality is more composed and complex than its caricature, we are led towards a question which Jakobsen does not allow for: Is it a given that we must think in completely new ways to create a sustainable lifeform? Could it be that liberalism,mechanically considered strategies are also able to provide functioning solutions?

Ove Jakobsen claims, fairly categorically, that the established mechanisms are unable to direct us to the society we must create. This gives the portrayal an either-or-mark. A possible alternative is to assume that we are faced with complex questions without definite answers. Rather than speaking in absolute terms, we should be open for many solutions will be created in the space between the existing and its alternative. We ought to recognise that economy is also an ideology, forming a part of the break and interaction with other ideologies – where our choice of direction in the end is mostly about values, ways of understanding and what we want from social development. This point could be explored if Ove Jakobsen’s transformative, economic-ecologic Utopia was to grapple with more politically-based perspectives.

The Left Case Against the EU by Costas Lapavitsas

Book review by Mathew D. Rose Do you have a feeling something is going seriously wrong in the EU with the rise of neo-fascism, inequality, and power of corporations, but cannot quite put your finger […]