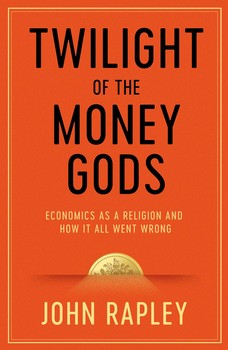 In 1944 two German philosophers, Theodor W. Adorno and Max Horkheimer, having fled from Nazi Germany to the United States, published their book The Dialectic of Enlightenment. It analysed the genesis of social dominance in Western society, concluding that, for a political model to gain predominance it needs to expose the preceding dominant ideology as a myth. In so doing, however, it creates its own mythology to replace that of its predecessor, thus sowing the seeds of its own decline.

In his book, Twilight of the Money Gods – Economics as a Religion and How it all Went Wrong, John Rapley follows a similar dialectic approach with regard to the economics profession. The book consists of two elements: an excellent history of political economy and an analysis of the various schools of thought in economics seen as religions– in other words mythologies. To emphasise this approach, Rapley uses ecclesiastical metaphors and chapter titles (Filling the Pews, The Keynesian Revelation, The Great Neoclassical Awakening), describing the intellectual careers of the high priests of economics and their inevitable defrocking. In his narrative Rapley charts the rise and fall “of our economic churches, showing how all these scholars were united by a common quest: to give humans a doctrine that could deliver us prosperity and contentment for life.”

The book is written for the non-economist in a colloquial and amusing style. Names like Kim Kardaschian, Marquis de Sade, and David Beckham appear along with Adam Smith and John Maynard Keynes. Rapley’s history of political economy is easily accesible, free of mathematical equations and technical jargon. He analyses the irrational elements of economics as the religious ideologies of a pseudo-science. Rapley describes the hubris and nemesis of the profession, concluding with the debacle of 2008, the Great Economic Crisis, which only a handful of apostates saw coming – nor could the high priests of neoclassical economics, with their panglossian economic theory of equilibrium, explain why it occurred. According to Rapley these repeated crises in economics are the result of its pretension to being a science.

Rapley first examines the origins and role of religion. In his account of various theories to explain why humans adopted religions he gives only a desultory nod to what is probably the most interesting explanation, that of anthropologists: “Priestly castes grew up alongside ruling classes, justifying the privileges of both and socialising the masses into passive acceptance of their leaders’ superiority”. Just as the Catholic Church in Europe determined the culture of Europe, so has economic theory since the advent of capitalism. This becomes Rapley’s central question: How secular and scientific is economics really, or is it simply a profession of faith in the service of financial interests?

The historical narrative begins with the Reformation and works its way forward. Rapley packs Adam Smith and David Ricardo into a chapter entitled “Prophets for a material age”. Both men were members of the burgeoning middle class. Smith was an academic; Ricardo, of Jewish origin, was from a banking family. Both were champions of the rising capitalist middle class, providing rational arguments to end the economic and political domination of Britain by the landed aristocracy. It was the beginning of the political decline of the aristocracy, whose dominance had survived the religious upheavals in Northern Europe. [Thanks to Luther who to save his life, turned against the peasants who had questioned the divine societal order of Catholic Church dogma.] The efforts of Smith and Ricardo culminated in the repeal of the Corn Laws in 1846 and the triumph of “the free-trade gospel”. A new church had been founded.

What Rapley describes in the following chapters is the repeated adoption of new orthodoxies by economists adapted to the dominant political and financial powers of the time, providing each with a dogma and moral code to fit its interests. Yet each new faith is doomed to decline as its myths are exposed: “Lose your flock, however, and you lose your pulpit” as Rapley observes.

As Rapley surmises, economists can preach whatever political/religious dogma they like, the problem remains that this has nothing to do with science. Economics is based on the behaviour of human beings, and there are few, if any, universal laws concerning our decision processes. A standard model of homo economicus simply does not exist. As he writes towards the end of his book: “Paradoxically, therefore, as economics becomes more truly scientific, it will become less of a science”, which brings us back to the dialectic. In Rapley’s opinion the future hope of economics lies in its distancing itself from the temporal world. Tell this to the academics whose salaries are paid by rich university patrons or by research grants from governments and corporations. They have become the minions of the system they helped to create and have propagated. Those in thraldom are not likely to sunder their chains, especially if they are gilded. So we are eagerly awaiting a new set of prophets who will lead us out of Egypt to the Promised Land.

Book Review by Ben Wray If the events of the past year and a half haven’t got you thinking about the importance of ecological catastrophe to the politics of the 21st century, nothing will. Following […]