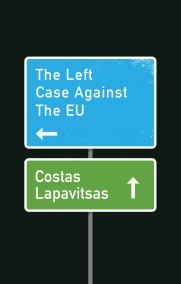 Do you have a feeling something is going seriously wrong in the EU with the rise of neo-fascism, inequality, and power of corporations, but cannot quite put your finger on it? Are you convinced that the EU has betrayed its ideals and needs to be radically reformed? Have you come to the conclusion that the only way to save Europe from neo-liberalism is to abandon the euro and the EU? If you identify with any of these, then Costas Lapavitsas`s recent book “The Left Case Against The EU” is a book you must read. With his compact analyses Lapavitsas, Professor of Economics at the SOAS University of London, brings together the major political, economic, social, and environmental policies of the EU that have resulted in the rapidly deteriorating situation in the union and the Eurozone, in an easily understood narrative. You need not agree with his conclusions to find this book extremely enlightening und useful.

The EU political elite have always had two great advantages: no one really identifies or cares about the union and it is portrayed in such intricate manner – intentionally – that most EU citizens do not understand what it is really doing. What keeps the EU going is a lot of money and what Wolfgang Streek terms “sentimental symbolism” among many of its citizens: an unquestioning belief that the EU is a force for good, promoting unity and shared prosperity.

Lapavitsas´s book sets out to debunk the EU discourse: “The EU is neither a purveyor of `soft power´, nor a benevolent and humanitarian force. Rather, it is a hierarchical alliance of nation states that have created the institutional framework of a single market relentlessly promoting neoliberalism.”, or as Larry Elliot aptly sums it up “Neoliberalism is hard-wired into the EU”.

Lapavitsas meticulously explains why the EU is anything but a democratic institution. Firstly, the most powerful bodies of the EU are neither democratically elected, nor fully accountable for their actions, many of which are anything but transparent. The same is true with regard to the administration of the European Court of Justice (“arguably the strangest institution in a veritable menagerie of strange institutions in the EU”), which has become the ultimate enforcer of neo-liberal policy, as well as the European Central Bank.

The turning point, where the EU began its neo-liberal trajectory was the Maastricht Treaty. Since then the EU has transformed itself through its vast legal framework into the bulwark of capital against labour and the the champion of neoliberalism. While most laws are created by the Council of Ministers, the European Court of justice interprets them and, as the author points out, also creates case law itself. It is accelerating EU integration and interpreting the EU Four Freedoms and competition laws in the interest of international corporations. This authoritarian, undemocratic, neo-liberal machinery dictates policy. Individual national legal systems must comply. These include very rigid policies destroying all opposition, as was seen in Greece and which we are currently witnessing in the budget-brawl between the EU and Italy. As Lapavitsas points out, this is anything but an alliance of nations, a partnership of peoples and all the other empty phrases which the EU and corporate media daily bombards us.

Instead it has reduced national and popular sovereignty, and it has alienated the poor and the working class in EU nations, who still see their national governments as their representatives, not the EU. This is borne out by the perception of democracy by EU citizens. When they have demands for change they turn to their national government, not the EU. The Greeks go to Syntagma Square, Germans to Brandenburg Gate or the Bundestag, and the British to the Houses of Parliament (pre and post Brexit). It is extremely rare that real protest goes to Schuman Square. Lapavitsas is correct when he claims there is no European demos. The sovereign state is the political home of European citizens, not the EU.

Lapavitsas is not overly simplistic in his analyses, recognising that “there is cooperation among capitalist classes across Europe, especially when it comes to sustaining the neoliberal project or the EU, but there are also insuperable division, hierarchies and hegemony among them.”

What we are seeing in Europe is a hierarchy and divergence among states. The hegemon, dictating EU policy is Germany, which is using it to further its own interests at the expense of other nations. This was especially visible following the Great Financial Crisis, where other EU nations had to bail out reckless German banks. Berlin leads a core of Northern European nations including France, the Netherlands, Austria, among others. Then there is Italy, half a member of the core, half part of the periphery. Lapavitsas identifies three peripheral regions within the EU: The “Southern Periphery” – Greece, Spain, and Portugal; “the Central European periphery” (Poland, Hungary, the Czech Republic, Slovakia, and Slovenia) attached to the German industrial structure; and the “Baltic Periphery”.

As the citizens of the periphery states are increasingly paying the price of Germany´s EU dictate (not to forget that the British people made their opinion about this very clear with Brexit), it has been exclusively the Far Right that has capitalised on this discontent. The once centre-left Social Democrats, who supported the neo-liberal European project, has been swept from the political stage by irate voters. Other Leftists still claim that only thanks to the EU the nation state has been transcended, borders no longer exist, and promote a political entity beyond the individual sovereign state, which they claim was the cause of so much misery and war. They too are rapidly losing credibility in the eyes of voters.

In that the Left has not comprehended that not being a democratic institution, but a “transnational juggernaut geared to neoliberal and hierarchical motion”, the EU has no tolerance for reform, as well meaning as it may be, or of public opinion for that matter. This became clear after the proposed EU constitution was rejected by national referendums; the EU political elite simply rebooted and adopted it as the Lisbon Treaty, not necessitating popular approval. Thus the left, in supporting the EU as “an inherently progressive development” not only prevents itself from offering a different perspective, but has integrated itself into the neo-liberal project called the European Union.

The Left Case Against the EU by Costas Lapavitsas

The economic recovery is progressing really well in the EU – if you believe the EU political class and mainstream media. It isn’t. And with a lack or leadership and competence there is a rude […]