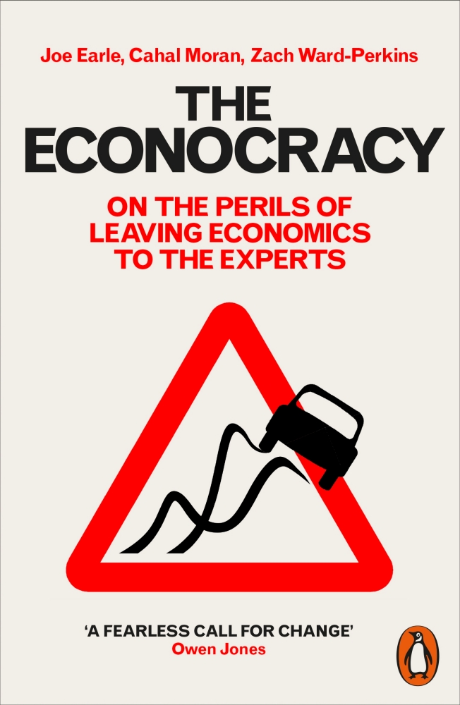 I remember as a student at the history department of the University of California at Berkeley in the 1970s the first time a member of the teaching staff appeared in a lab coat. He was carrying a box of computer punch cards  – computers were just taking off. History was going scientific. No more of this liberal arts stuff. We students were bemused. Quantifying considerable amounts of information was great, but in the end, history is a subjective interpretation of events. It has always been, since Herodotus and Thucydides, and will probably remain so for some time.

The economists beat the historians by around 100 years in their endeavour to be scientific. But a non-science claiming to be scientific risks meeting its own nemesis around the corner. It is likely to be ignoring facts that are staring it in the face – and what can be less scientific than that?

Three students at the Economics Department at the University of Manchester have had the courage to question the wisdom of their elders. First, they helped found a student campaign to reform economics education in the UK, then they wrote a book about it. It is not a book for experts but for those of us without an economics degree. It aims to enlighten a wider public, demystifying the utterances of the high priests of neo-classical economics and pointing the way to a more less elitist approach to the subject.

Not only do the authors make a convincing case for a heterodox approach to economics, but they provide an excellent introduction to the current developments in economics beyond what we are hearing from the so-called experts, politicians and most mainstream media.

Following the Great Economic Recession of 2008 to 2010 the three authors decided to study economics in order to understand what had occurred. On graduating they discovered “that our economics education has not equipped us with the knowledge or skills to justify any authority we are given”. They felt that what they had been taught had no relevance to understanding economic developments in the real world.

Not only had economics lost contact with economic reality, according to the authors, but also with society. Economists with their jargon, graphs, and statistics told us what to believe, but few of us could make sense of what they were saying. Just as the Catholic Church confuses the layman with its Latin and arcane ceremonies, so with economics, the path to truth seemed open only to the enlightened few. But how, ask the authors, are citizens to make responsible democratic decisions when they do not grasp the fundamental economic dynamics of their society? They point out that the use of scare tactics during the Britain’s EU referendum of 2016 succeeded because of the general ignorance of how economics really works. Dire warnings about the dangers of wandering into unknown territory were dismissed as Project Fear by those in favour of leaving the EU.

The authors see the root of the problem in the dominance of the standard neo-classical approach throughout the profession and the courses at most universities throughout the world: “Firstly …economics students only learn one particular type of economics; and secondly …they are taught to accept this type of economics in an uncritical manner.” With regard to their experience at the University of Manchester they speak of “indoctrination”.

Neo-classical economics uses complex mathematical models, which are based on assumptions that often have little to do with reality; hence its inability to foresee or explain the Great Economic Recession. Many consider neo-classical economics to be the theoretical dogma of neo-liberalism. For readers who have no idea of what this dispute is about this book is a good place to begin.

The predominant neo-classical economists have become increasingly intolerant of other economic approaches, especially as their own shortcomings have become glaringly apparent. Other approaches have been consigned to the academic periphery, with a resulting impact on appointments of professors. This is hardly a good advertisement for universities as institutions of free thinking and liberal education.

The authors make the case for pluralistic economics, explaining the varied and rich approaches available as we try to comprehend what is actually going on. They are not only concerned that economics teaching should be improved, but also favour the encouragement of “citizen economists”, who would challenge the neo-liberal economic discourse dominating our society. As they point out: “Economics is for everyone” – and so is their book.

The Econocracy: The perils of leaving economics to the experts By Joe Earle, Cahal Moran and Zach Ward-Perkins