No contemporary famous economist has as broad interests and knowledge, nor as diverse life experience as Amartya Sen. It is not surprising that many have been looking forward to reading the first volume of his memoirs. It covers the period from his birth in 1933 to the beginnings of his academic career in the United States in the early 1960s. That very term “the beginning”, I realized as I wrote it, is misleading. Not for 99 percent of ordinary economists whom at thirty one might consider the academic beginners. But for Sen who got his first professorial position at 23, the age of thirty was that of an already “seasoned” academic! 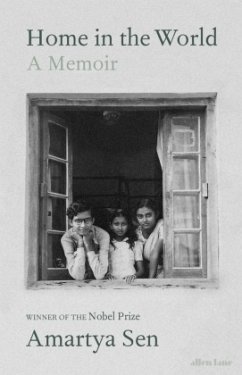 The precociousness of the young Amartya is one of the two most striking things that every reader will notice. At eight, Amartya is engaged into historical discussions with his father and grandfather. At 12 or 13, he is into the study of the Sanskrit (his first language being Bengali) and the foundational basis of mathematics. I do not think that I have read a memoir where such level of interest for very abstract topics is evinced by such a young person. Perhaps John Stuart Mill may be the only contestant.

The second striking thing is Sen’s passion for the intellectual history of India (as a subcontinent), and his disdain of ethnic and religious exclusivism. The first three parts of the book, about 250 pages, that deal with India are written with an extraordinary passion, and for many readers (including this one) they are full of new things that one can learn from even the shortest discussions of the Indian Buddhist heritage, diverse interpretations of Ramayana and Mahabharata, the elegance of the Sanskrit. The discussions are brief –by necessity since it is a book of memories, not a philosophic treatise—but coming from somebody as knowledgeable as Sen, these short one- or two- page commentaries inspire confidence, and may perhaps lead some readers to try to learn more. For we know that they are supported by much more evidence than can be produced in this book.

The relationship between Amartya and his grandfather K. Mohan, a scholar and compiler of Hindu rural poetry, provides the backbone of the early—up to the university years—life of Amartya. Another influential person was Rabindranath Tagore, a close family friend. Amartya did his middle and high school in a school organized according to Tagore’s principles. In a chapter entitled “School without walls”, Sen describes the exhilarating atmosphere of a place where students are motivated not by a combination of incentives and punishments, but by being allowed to follow their inclinations while helped by committed professors. The idea is quite extraordinary even if one doubts that it can be expanded to a larger scale. But for students like Amartya, it was, as he writes, the best possible fit, much better than the more orthodox and competitive St. Gregory in Dhaka that Amartya attended only briefly, and gladly left, being ranked the 33rd of 36 students!

We are then taken, in several beautiful chapters, to the tumultuous life of Calcutta of the early 1940s, with the beginning of the World War II, Japanese invasion of Burma, formation of Bose’s Indian National Army, pro-independence effervescence among Calcutta’s youth and Sen’s own family (with several members kept in British jails), and the momentous split between the Hindus and the Muslims. The political excitement, the fear of war (the Japanese having bombed Calcutta’s harbor) and the looming intra-communal conflict are the background –and perhaps an indispensable condition—for the exciting intellectual life carried on in innumerable Calcutta’s cafés and bookstores. One almost wishes to have been there and then–obviously in the knowledge that he or she would have survived all the upheavals.

While reading that part of Sen’s memoirs, I thought of the two autobiographical books written by Sen’s Bengali compatriot Nirad Chaudhuri, “The autobiography of an unknown Indian” and “Thy Hand, Great Anarch!”, perhaps among the most beautiful books of political reminiscences ever. They, only in part, touch the same period (Nirad being much older), but convey to the reader the same intellectual fervor of Calcutta. Chaudhuri, not always liked by all Indians, was the proponent of the view that the mixture of European, i.e. British, and Indian, i.e. Bengali, cultures produced a unique Euro-Asian fusion. I thought that, in a brief chapter where Sen assesses the contributions of British colonialism—and damages it wrought (not least the Bengali famine of 1942)—he tacitly endorses, or comes close to agreeing with, some of Chaudhuri’s vision.

The book is written in a simple, engaging style. It is a different style from that used by Sen in his economic and philosophical writings. I find the latter, to the extent that I understand them, written in, at times, unnecessarily obscure style. But here I had the opposite impression: I wanted to read more and wished that Sen’s recollections and discussions of political and ideological issues were more extensive. There is, for example, a story of the difference in the perceptions of Tagore in India and in Europe. For Sen, Tagore was a rationalistic thinker while in Europe he was praised and promoted by Yeats and Ezra Pound as a mystic. Yeats and Pound seemed to have seen in Tagore whatever they wanted to see and Tagore became a prisoner of that false image created in the West.

The last third of the book when Sen moves, temporarily, to the West, first to Cambridge, England and then (mentioned very briefly at the end of the book) to MIT in Boston, is much more “problematic”. While Sen’s youth is convincingly and absorbingly described in both its political and personal aspects (e.g., Sen’s bout with cancer), the European part takes place in a social vacuum. There is almost nothing that Sen tells us about the political and social milieu of Europe in the 1950s and 1960s. Even more surprisingly, there are hardly any observations, other than trivial ones, about the encounter of the East and the West that must have impressed such a brilliant and precocious mind like Sen’s. Even Sen’s European travel reads like a travelogue of places he has visited with no many insights offered: yes, we all know that Michelangelo’s David is impressive: is this worth repeating in a memoir? The only memory of Warsaw in 1956 is a one-sentence mention of a political conversation in a bathroom.

The life in Europe seems to take place on campuses and among the multitude of students, teachers and philosophers. Now, this would be interesting in itself since Sen had a chance to study with, discuss, and observe some of the most brilliant minds of the time: Piero Sraffa, Dennis Robertson, Joan Robinson, Maurice Dobb, James Meade. Unfortunately for many of them, like for the cities in Europe he visited, Sen lists the names with a sentence or two of generic praise. (The only exceptions are Sraffa and perhaps Maurice Dobb; see below.) It seems that the ubiquitous mention of everyone who has crossed paths with Sen may have been done so that no one could feel slighted or excluded. Glowing adjectives are abundantly assigned (“most original”, “delightful”, “close friend”, “splendid economist”, “superb mathematician”, “astoundingly talented”). This somewhat skeptical reader cannot believe that several hundred people whom Sen had met had all invariably been extraordinary scholars and the kindest human beings.

Trying to be nice to everybody is a wrong approach in a memoir by one of the foremost intellectuals of our time. A memoir is not a letter of recommendation that one writes for his friends. Neither us, nor future readers, will be interested in the names of the multitudes who have met Sen. We, and they, are interested in Sen’s comments on the times and important people. There are, as I mentioned, indeed some, alas too short vignettes: on Dennis Robertson, Joan Robinson, Sraffa and Dobb. By his own reckoning, Sen had spent hours and hours conversing with Sraffa and Dobb. But we are given much less of their personalities than is the case with Tagore and people from Amartya’s youth.

Rather unexpectedly, among the few persons who are openly criticized (even if mildly) is Joan Robinson for her “dogmatism” and unwillingness to listen to contrary opinions. Samuel Huntington is twice, very indirectly, criticized for his “clash of civilization” thesis that Sen quite convincingly debunks through his own experience. Aung San Suu Kyi, the Burmese president, who was Sen’s friend, and whose reversal from a pro-democracy martyr to de facto supporter of ethnic cleansing, is censured, and her transformation is found both disturbing and incomprehensible.

The non-Indian part of the book seems rather flat, offering less of original thinking than we get from Sen’s reflections on India and his life there. Perhaps Sen himself, by being not just an economist, but a historian and a philosopher, is “guilty” of having made us expect a uniformly high level of insight. But even with these minor flaws, “Home in the world” is an extraordinary book written by an extraordinary person.

What is not mentioned are the duties required of citizens, but one can buy one’s way out of these too. This aspect, by the way, is well covered in Branko’s book “Capitalism, Alone”, a book […]

The Coming Crisis, Edited by Colin Hay and Tom Hunt

Book review by David Shirreff A good title does not guarantee a good book, and this one is good only in parts. Everyone would love to know where and when the next crisis will come, […]