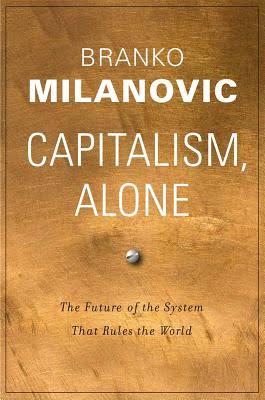 The highest praise that I have usually lavished on a book- and this book certainly fulfils this – is: “It has changed my way of thinking about a topic”. While reading Branko Milanović’s “Capitalism Alone” I came to recognise a second, which may sound like cant: “Thought provoking”, meaning the author opened trajectories of thought that led me to my own new perceptions. Milanović’s book is very obliging in this respect as it is densely packed with new material yet not difficult to read (actually it is well and interestingly written), and it has an immense quantity of excellent analyses.

The central hypothesis of the book is straightforward, defining two epochal changes. First, for the first time the world is dominated by a single socio-economic system: capitalism. Second, there is a rebalancing of economic power between the Western industrialised nations and Asia. But unlike Francis Fukuyama before him, Milanović does not see this as a teleological “End of history” but, astutely, as the source of new conflict and crisis.

To begin with there is a major schism in the universal ideology of capitalism between the “liberal meritocratic capitalism” of the West and the state-led, authoritarian “political capitalism” as seen principally in China. In what follows, Milanović identifies what he sees as the strengths and weaknesses of these two capitalist systems.

Western capitalism – liberal democracy plus capitalism – has a number of advantages as Milanović points out: the most important being democracy and the rule of law, enabling social mobility and dynamic innovation. All this is under threat, as he so well documents, from the rise of an oligarchy, which is usurping democratic government and corrupting the rule of law with the massive wealth it has accumulated in the era of globalisation. The features that had provided nineteenth century classical capitalism and twentieth century social-democratic capitalism with success are being undermined by a concentration of capital. Under “liberal meritocratic capitalism” as Milanović terms it, there has been a radical reduction of redistribution mechanisms, such as taxes, especially inheritance tax, as well as the undermining of the public education system. Wealth and a good education are fast becoming the sole domain of an increasingly select few. The ensuing isolation of this class is even reflected in marriage patterns. Instead of aristocratic blue blood being the determinant of an eligible marriage partner, for this new oligarchy this is determined by wealth and income. This is a class that no longer identifies with, nor feels it has any responsibility for, society, fully accepting social polarisation, while it finances the political class to further its interests, thus reducing democracy to an empty ritual.

Liberal meritocratic capitalism is being challenged by the new capitalist kid on the block, Political Capitalism. This is authoritarian capitalism, in the case of China embodied by the communist party (communist in name only). It gives the political elite complete autonomy, free of interference by its citizens or class of wealthy citizens. Thus it can create “a highly efficient and technically savvy bureaucracy” of the best talents to direct the economy and society. Add to this the absence of a rule of law, which allows the party to further its system and benefit its selected beneficiaries, by not applying the law against itself and its supporters when it furthers its policies. This has been crowned with phenomenal economic success in China. As Milanović points out, China has in the past decades inexorably grown at a fantastic rate, stopping global inequality in its tracks, even reducing it markedly: “China not only prevented global inequality from rising, but it also accounted for more than 95 percent of the reduction in the number of people in the world living below the absolute poverty line.”

But the numbers tell another story as well. Inequality within China is even more egregious than in the West. The wealthy elite of the private sector, which is much larger than the public sector, may wield no direct political power, but their interests are well served by the state. A weakness is that the whole system – party and bureaucracy – is influenced by corruption, which according to Milanović is endemic in China. This can prevent the party and bureaucracy from reaching the right decisions to further the system by producing high growth, which has been the basis of China’s social peace since the suppression of the Tienanmen Square uprising in 1989.

Another danger inherent in political capitalism is the selective application of the rule of law by the political elite. How potentially explosive this can be has been seen in the past months in Hong Kong. It is a decision that has gone terribly wrong and the Chinese government still seems to have found no means of restoring political equilibrium in Hong Kong short of sending in the People’s Army.

Two points that Milanović mentions, but possibly not with adequate prominence, are that, while the economic prosperity of China was made possible by globalisation, it is under threat for the first time. First, although globalisation is here to stay, it has suffered a setback, which is already putting the Chinese economy under strain. Furthermore, capitalists know how easily production can be shifted to other sites around the world. Foreign investment can easily be restricted to the Chinese domestic market, with production for export being moved to other Asian nations – something Donald Trump is already trying to encourage US companies to do.

Second, capitalism produces crises. Since its economic ascent China has not really had a domestic economic crisis. One will surely come, and it will be the first test of how robust political capitalism really is.

There are moments where Milanović waxes a bit too lyrical about the Chinese government. He claims that China has an especially enlightened foreign policy. China’s first overthrow of a foreign government (Mugabe in Zimbabwe) was bloodless. He does not mention its earlier role in ending the Sri Lankan civil war, which was anything but bloodless and has resulted in Sri Lanka being highly indebted to China for questionable infrastructure projects. The Belt and Road Initiative is also at its beginning and will be anything but a simple project, as we are already seeing. Add to this that the US and Russia see it more from the perspective of its geo-political consequences than of economic ones.

In the fourth chapter, “Capitalism and Globalisation”, Milanovic goes into a more technocratic mode of analysis, but no less interesting. Whereas globalisation is usually defined as the free movement of capital and labour, he adds a third element, corruption, breaking with the original neo-liberal denotation, which has always included the rule of law as an integral element. The addition of the corruption factor is long overdue: full marks to Milanović for that.

He goes on to examine the development of all three elements. By far the most interesting is the section concerning corruption, as he focuses not on third-world nations, but on the enablers (and profiteers) of globalised corruption in the West: the armies of bankers, financial and tax advisers and lawyers, who have created safe havens for corruption payments and stolen assets. Milanović goes even further, defining this circle of benefactors to include those institutions such as universities, museums, football clubs and others, who readily accept cash from oligarchs who have immigrated to the legal safety in the West, after having used the legal vacuum of their native nations to obtain their fortune, providing them with a respectable veneer.

Milanović gives an impressive amount of space and effort in his book to provide a thorough analysis of the role of corruption in globalisation. Thus the conclusion he draws is all the more surprising: “The time has come to normalize corruption: we need to see corruption, in both types of capitalism, as a return (analogous to a rent) to a special factor of production, political power, which some individuals possess and others do not.” Milanović has many radical perceptions that I find intriguing and correct. In this case I cannot agree. We all know it is the wealthy that profit from corruption and it often leaves a trail of death and destruction behind it, especially in the Third World, and is a prime driver of inequality everywhere.

The fifth and final chapter, “The Future of Global Capitalism”, deals with what Milanović terms “hypercommercialised capitalism”, a capitalism that has gone off the rails – an immoral, commercialised economy, with the absence of any social contract: “success and power in a commercialised society are expressed in money only, and that money is obtained through work, ownership of assets, and, not least, corruption.” Social legitimacy is now defined by law but, as Milanovic had already pointed out, law in political capitalism is a tool of convenience for the ruling political class, and in the Western nations adapted in return for remuneration to the interests of the wealthy and criminal.

Atomisation and commodification, the two most important tools of hypercommmercialised capitalism are, according to Milanović, transforming us into daily capitalists, furthering the process of destruction of our societies and culture – and oddly enough capitalism itself. While Milanović cites the reduction of world poverty due to globalisation, he at the same time realises that both capitalist systems are on the same trajectory and nearing one another: “unification and persistence of the elites”. And even the technocratic side of Milanovic comprehends that this will not end well. What he favours is the reduction of concentration of wealth and inequality (everyone has approximately equal shares/amounts of capital and labour income); improving intergenerational income mobility through equality of opportunity, especially in education; adapting citizenship rules to allow for migration with less backlash; and, banning private funding for political campaigns.

This is without a doubt an intriguing book. What I have always most valued about Branko Milanović is his willingness to follow his intuition to open up new aspects of the political discussion. I may not agree with him on some issues, but I always come away greatly enriched by the experience. “Capitalism, Alone” was another such moment.

Published by The Belknap Press of Harvard University Press

Limits: Why Malthus Was Wrong and Why Environmentalists Should Care by Giorgos Kallis