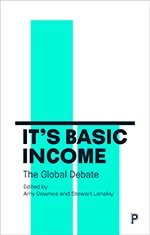 Universal Basic Income, or UBI as it is abbreviated, is without a doubt a popular topic. The problem is that behind the emotional hype there is a lot of scepticism among experts. This conflict is not helped by the fact that there is only a very vague definition of UBI (A guaranteed income for every woman, man, and child), and even that is fraught with dispute.

Thus the idea of Amy Downes and Stewart Lansley to try to sort the issue is much more ambitious than meets the eye. The authors both support a universal basic income, but try to broker an honest debate, as the subtitle states. The book contains 38 short pieces on the topic of universal basic income. Although most are in favour, this does not matter, because a number of authors who support the idea are also very critical in their approach, thus providing a debate within their articles.

Without a doubt, Louise Haagh’s contribution “Basic Income and the democratisation of development in Europe” is a veritable tour de force. She is one of the few authors who does not become distracted by the solution, but defining the problem: “reconstituting humanist governance from the ground up, an element in a wider challenge to re-democratise the state”. She is not naïve, like many contributing authors, and recognises that the idea of a universal basic could easily be hijacked by neo-liberal interests to reduce the state even further, not to mention the already existing welfare systems. When Mark Zuckerberg starts praising universal basic income as a solution for the future, red lights should be blinking and alarms sounding.  Using the Nordic states as her starting point, she recalls that decades ago they had “come very close to providing unconditional security”, but since the 1990s conditionalities and sanctions are on the increase. It is this development that has to be reversed, so that a basic income is once again a form of universal security.

This is something that the explicit “critics” of a universal basic income also point out. For them, like Haagh, it is a question of re-politicising the question of social protection. They see the current discussion around universal basic income as doing exactly the opposite: depoliticising social protection. Forgotten are the struggles fought that had attained a much more effective system than we currently have. Ideas are neutral, it is what is done with them, and that is where they see danger lurking.

A typical example is the piece by Brian Eno in the book, although he is politically savvy. He recalls how after leaving Arts College he received National Assistance money, enabling him to make a career in music. There is no mention by Eno of what became of the programme. It is simply gone – like so many social benefits that once existed in Britain, now replaced by a dysfunctional welfare system based on sanctions. Funding is not based on need, but austerity. With a universal basic income all will be well again. That is certainly not on the cards with the Tories, nor with the EU political elite. Their goal is to further reduce the welfare system.

As Anke Hassel, a critic, points out, with the establishment of a universal basic income increasing social inequality is no longer a scandal, “since everyone would have an income, albeit close to the poverty line”. She mentions a number of questions  that have not been properly addressed by the proponents of a universal basic income. Similar to Haagh, she comes to the conclusion: “We need a debate about a good society that is not based solely on employment and the labour market.”

The book contains a number of uncritical, if not downright embarrassingly romantic portrayals of a universal basic income. An example of the former is the first article by Martin Ford, who writes of artificial intelligence: “These innovations will make the production of goods and services of all kens more efficient and affordable and are sure to have enormous benefits for all humanity.” Odd, that is exactly what we were told at school fifty years ago with regard to automation. Today we have a radically greater inequality than then, the disassembling of the welfare system, and an acute climate crisis. And here it is again. Ford comes from Silicon Valley, which explains his views.

The examples of past and current experiments with a universal income are anything but conclusive. Most are very small, nothing more than alternative unemployment benefits, and conducted over a short period of time. Some are not even properly evaluated.

It is not clear if the disparate quality of the various articles was intentional on the part of the editors , but maybe a few less articles and a few more competent authors (maybe there simply aren’t many), would have provided for a better debate.

The Univesrity of Chicago Press Books

Distributed for Policy Press at the University of Bristol