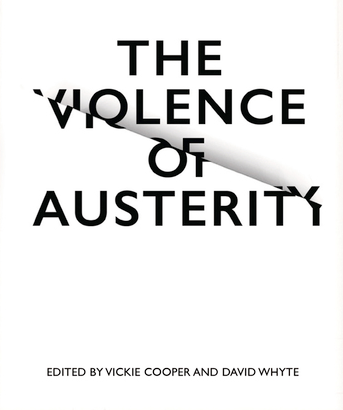 There are relatively few books dealing explicitly with austerity, and most of those come at it from a macro-economic angle. Thus it is refreshing to find a book that dedicates itself to what is happening on the ground in one nation through austerity. The “Violence of Austerity” provides 24 chapters by various authors, each covering different facets of austerity ravaging British society. Some authors take a step back and analyse specific fields using hard facts and statistics, others provide the reader with a description of the struggles being waged by citizens as they are overwhelmed by the devastation of austerity in Britain.

This book is not for the faint-hearted. Readers are confronted with the brutality of austerity and the lies behind it. Fortunately the publisher, Pluto Press, has given the book a sturdy binding, should readers in moments of anger feel the urge to throw it against the wall. The Violence of Austerity was published before the Grenfell Tower disaster, a tower-block fire which cost 87 lives. Yet that accident was another logical consequence of the developments the authors describe (See the chapter “Health and Safety at the Frontline of Austerity”).

In their introduction, the editors, Vickie Cooper (Lecturer in Criminology at the Open University) and David Whyte (Professor of Socio-legal Studies at the University of Liverpool) , provide the wide range of topics with a framework. The two are very clear in their analysis: “Austerity is basically a strategy for the advancement of neo-liberal policies”. This has nothing to do with the claim of the Tories that “we are all in this together”. As Paul Krugman put it, “the austerity drive in Britain isn’t really about debt and deficits at all; it about using deficit panic as an excuse to dismantle social programs … the drive for austerity was about using the crisis, not solving it.”

The editors identify three elements of  the politics of austerity”: “Fortress Austerity”, the policies aimed at preserving and expanding the wealth of those at the top, not reducing the deficit; “Extending wealth by growing inequality and enabling dispossession”, the privatisation of public assets and the cutting of taxes for the wealthy and corporations, thus increasing the wealth of both these groups and inequality in British society; “Permanently dissembling the ‘protection state’, whereby the government has made massive cuts in the welfare system and local government, both essential for caring for society’s vulnerable.”

At the core of the book is government policy. Although the attack on the welfare state began with Margaret Thatcher and ran through the eras of Tony Blair and Gordon Brown, it was the Tory – Liberal Democrat coalition (2010 – 2015) and the following Cameron – Osborne government, which introduced and expanded austerity. This policy is being continued by the present Tory government.

The policy of austerity is administered by institutionalised violence with a banal bureaucratic face. As the editors emphasise, behind this is “a cruel and violent strategy of class domination”.

The chapters that follow are short, between four to seven pages. This allows for the broad swathe of topics covered, including health, welfare, unemployment, asylum-seekers, child abuse, hunger, fuel poverty, racism, women’s rights, the Irish Peace Process, the environment, fracking, housing, prisons, homelessness and policing. Detail may have been compromised, but the goal of the book is to show how austerity perniciously affects the whole social fabric, especially the vulnerable and minorities.

While some chapters take a more general approach, showing how and where the government has slashed funding in the name of austerity and the results, others document the experiences and struggles of individual victims and groups.

The book exposes another side of the violence of austerity: those enforcing it. In his chapter, Steve Tombs labels this as “Undoing Social Protection”. This has been a mixture of state sector services, which have experienced deep financial cuts as well as having to enforce drastic reductions in benefit payments, and privatised public services, whose principal goal has been profits for the owners rather than serving those they should be responsible for. In her chapter on “The Multiple Forms of Violence in the Asylum System”, Victoria Canning concludes “The past seven years of austerity have eroded aspects of services that have otherwise taken 30 years of research, trial and error to develop”.

Many of the book’s authors demonstrate that companies and individuals are using the legal and ideological policies of austerity as a source of profit. That is not only the case of the privatised public services already mentioned, but also the sale of public property and institutions, as well as providing permits for fracking as a new source of state revenue against the wishes of a majority of affected citizens and the responsible county councils.

A number of authors criticise the increasing use of police intervention  to enforce austerity policies. This ranges from evictions, destroying protest camps by the homeless, to arresting peaceful protestors.

Whoever views austerity as a necessary “belt tightening” in response to past profligacy, for which all Britons are responsible, will find it described otherwise in “The Violence of Austerity”: as a system of accumulation by dispossession at the cost of the vast majority of Britons.

The Violence of Austerity –  Edited by Vickie Cooper and David Whyte

Book review by Svein Hammer There are those who still quibble, but most now recognise that our way of living has brought us to the edge of a cliff, where the threat of global crises […]

Book Review by Mathew D. Rose The highest praise that I have usually lavished on a book- and this book certainly fulfils this – is: “It has changed my way of thinking about a topic”. […]

Joe Earle, Cahal Moran and Zach Ward-Perkins – The Econocracy: On the perils of leaving economics to the experts

Book review by Mathew D. Rose I remember as a student at the history department of the University of California at Berkeley in the 1970s the first time a member of the teaching staff appeared […]