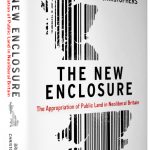 I should have reviewed Brett Christophers’ book, The New Enclosure, when it came out this time last year.  But better late than never. In 2017, Christophers, professor in Human Geography at Uppsala University, Sweden, published an excellent book, The Great Leveller, which takes a refreshingly new angle on the nature of capitalism.  He says that we need to look at how capitalism is continually facing a dynamic tension between the underlying forces of competition and monopoly.  Christophers argues that in this dynamic, law and legal measures have an underappreciated role in trying to preserve a “delicate balance between competition and monopoly”, which is needed to “regulate the rhythms of capitalist accumulation”.  And earlier this year, Christophers published an important piece of research on ‘renterism, as he calls it, in preparation for a new book on the nature of modern ‘rentier’ economy.

But in between, Christophers also wrote The New Enclosure: The Appropriation of Public Land in Neoliberal Britain, which delivers a forensic analysis of the ownership of land in Britain – historically the largest economic category of rental income in the modern capitalist economy.  Indeed, ever since the ‘enclosures’ of common land in the 16th century onwards, land has been privatised to accrue income through rent, ie income from property appropriated, not by exploitation of labour, but through monopoly ownership of an asset – income that Marx called ‘ground rent’.

Christophers shows that land makes up a staggering share of national wealth. Using the UK as his laboratory, he finds that, out of total national wealth of £9.8tn, land accounted for £5tn and houses and other structures added another £3.5tn on top of that.  The ownership of land acts as a store of wealth and, as the rents rack up, so grows inequality of incomes and wealth, while restricting the productive power of an economy.

The new enclosures of the 20th century in the UK emerged in the neo-liberal period from the early 1980s, when roughly half of publicly owned estates were privatised, the biggest of the Thatcherite privatisations.  Christophers carefully estimates that an astonishing 2 million hectares of public land, worth £400 billion, has been appropriated by the private sector in recent decades, representing 10% of the British land mass. When Thatcher entered Downing Street in May 1979, more land was owned by the state than ever before: 20 per cent of Britain’s total area. Today the figure is 10.5 per cent.

For example, in 1979, 42 per cent of the UK’s population lived in council housing. Today the figure is less than 8 per cent.

The new private owners of this public land hoarded the assets and throttled the construction of new homes, thus driving up house prices and rents.

What happened?  When Britain’s post-war housebuilding boom began, it was based on cheap land. As the book, The Land Question by Daniel Bentley of thinktank Civitas, sets out, the 1947 Town and Country Planning Act under Clement Attlee’s government allowed local authorities to acquire land for development at “existing use value”. The unserviced land cost component for homes in Harlow and Milton Keynes was just 1% of housing costs at the time.

But landowners rebelled and Harold Macmillan’s Conservative government introduced the 1961 Land Compensation Act. Henceforth, landowners were to be paid the value of the land, including any “hope value”, when developed. Today a hectare of land is worth 100 times more when used for housing rather than farming. Yet when an council grants planning permission, all the value goes to the landowner, not the public. Bentley says landowners pocketed £9bn in profit from land they sold for new housing in 2014-15. Major infrastructure projects such as Crossrail 2 and the Bakerloo tube line extension are estimated to cost the public purse £36bn. Landowners, meanwhile, will pocket £87bn from increased land values nearby. Some externalities!

Classical political economy, starting with Adam Smith, David Ricardo and then to Karl Marx, explained the peculiar nature of this geographically bound asset that can be commodified, accruing an income for the owner without any productive effort.  ‘As soon as the land of any country has all become private property,’ Adam Smith wrote in The Wealth of Nations, ‘the landlords, like all other men, love to reap where they never sowed, and demand a rent even for its natural produce.’ This is the beauty of land: it is an asset that increases in value according to demand, without any expenditure or labour on the part of its owner.

Thus both the early 19th century political economists of industrial capital and Marx agreed on the need to nationalise land – indeed, it is in the Communist Manifesto  But it has not happened.  Instead, private ownership has increased and through inheritance has ensured the continuation of the same ruling elites for centuries.  A recent study by two economists at the Bank of Italy found that the wealthiest families in Florence today are descended from the wealthiest families of Florence nearly 600 years ago! So the rise of merchant capitalism in the city states of Italy and then the expansion of industrial capitalism and now finance capital made little or no difference to who owned the wealth. When, in 1873, the government published the Return of Owners of Land, the most comprehensive survey of British land distribution since the Domesday Book, it came as no surprise that almost all the top hundred landowners were also members of the House of Lords. Just as predictably, 30 per cent of today’s Tory MPs are landlords.

The private ownership of land is part of what I call the rentier economy, income accruing to the owners of financial assets or physical resources. This income (rent and interest and dividends) is appropriated from the productive sectors of capitalism where surplus value has been obtained through the exploitation of labour.  Such rentier income can be appropriated from overseas through bank lending and foreign investment (as it has in the UK), but also domestically from land rentals.

As LSE professor Jerome Roos perceptively pointed out in the British left journal, New Statesman,“the concentration of wealth and power in the hands of a few privileged rentiers is not a deviation from capitalist competition, but a logical and regular outcome. In theory, we can distinguish between an unproductive rentier and a productive capitalist. But there is nothing to stop the productive, supposedly responsible businessperson becoming an absentee landlord or a remote shareholder, and this is often what happens. The rentier class is not an aberration but a common recurrence, one which tends to accompany periods of protracted economic decline”.

Christophers’ book shows that any plan to replace the capitalist mode of production with common ownership must include the nationalisation of the large landowners and the abolition of rentier income.

A look back at the goals of Abenomics and what became of them. Michael Roberts is an Economist in the City of London and a prolific blogger Cross-posted from Michael Roberts Blog Over the weekend, […]

Why should capitalism be “Saved from itself”? Michael Roberts is an Economist in the City of London and prolific blogger Cross-posted from Michael Roberts Blog Joseph Stiglitz is a Nobel (Riksbank) prize winner in economics […]

Michael Roberts – Stagflation: a demand or supply side story?

Why stagflation is a likely outcome in the current economic situation. Michael Roberts is an Economist in the City of London and a prolific blogger Cross-posted from Michael’s Blog The semi-annual meetings of the IMF […]