A good historical piece for a Sunday read. 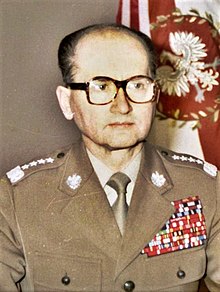 When several days ago I ran into a Polish bar tender(ness) in a restaurant in New York and she told me she was born in 1981, I, wanting to impress her, pronounced these two Polish words “stan wojenny” (the state of war). They brought in a veritable surge of memories.

My interest for Poland began with the Solidarity movement in 1980. The movement was extremely important. It was a movement for the true independence of Poland, and it was supposed to have never happened in a socialist country: workers standing up, in millions, against a workers’ state! The evolution of Solidarity from its legalization, the many conflicts with the authorities, and the eventual ban as well as the turmoil within the Polish United Workers’ Party (Gierek, Kania, Jaruzelski) was covered very well in the Yugoslav press. Perhaps it was one of the best and most detailed coverages of any foreign event. It was discussed better than in the mainstream US magazines like Time and Newsweek. At that time, I read a lot about Poland, attended discussion seminars, started to study the language, and was helped  by a close friend who had personal ties to Poland.

Fast forward to 1987 when I began to work as a country economist for Poland in the World Bank.

For the background, it is important to know that Poland became World Bank/IMF member in 1980 and then in 1981, after the Martial Law was declared, it defaulted to the Western club of public creditors. The country’s GDP dropped precipitously in both 1980 and 1981, the West imposed economic sanctions, the country did not export much to gain foreign currency anyway, and the default ensued.

The World Bank could not technically lend to Poland under such conditions even if the real reason was political. Poland was probably, within the World Bank, the most closely “monitored” (controlled) country by the US Treasury. The World Bank could do only economic work but no lending. The Polish government, being keen on having relations with the IMF and the World Bank, and hoping that they might ultimately lead to the softening of Western sanctions and rescheduling of the debt, was most forthcoming. Unlike many governments that would drag their feet, here was a government happy to talk to you.

But it was also a government that could do almost nothing. It was hemmed in internally by being in conflict with its “society”. It was unable to introduce a stabilization program that would lead to a severe decline in real wages. Externally, it could not renegotiate the debt. Finally, it could not move on some issues like privatization because this was ideologically unacceptable and it was not clear how the Soviets would look at it. The government nevertheless launched a stabilization program, named after a technocratic deputy Vice Premier, Professor Sadowski. It was a program of which the later famous Balcerowicz plan was a carbon-copy. But the Sadowski program failed because it could not politically push real wages down; it lacked political legitimacy and could not overcome the external constraint.

The Polish government and its agencies were totally technocratic. This was very different from Yugoslavia where its home-grown system of “socialist workers’  management”, complete with complicated ideological “baggage”, made the government thoroughly ideological. In Poland, the communist ideology was dead–since 1968. Only the language of technocracy existed.

Poland was much freer in the post-Martial Law than the Soviet Union without it. Political discussions in Poland were remarkably open. There were good books and good newspapers. I was able to read tolerably well Polish at the time and I recall how impatiently I would wait for the weekly publication of Polityka which always carried good sociological and political articles. These were much more interesting discussions—to my mind—than those in Yugoslavia at the same time. Yugoslavia was entirely “nationalized”: every issue was considered through the prism of nationalism: is it good for the Serbs, Croats etc. In Poland, which due to the Holocaust and ethnic cleansing of the Second World War, was 99% ethnically and religiously homogeneous, the issues were political not ethnic.

It was also a very “civilized” country. One small event stands out in my memory. On a Saturday night, there was a rowdy crowd of young people drinking in the main square in Warsaw. Two policemen approached the drinking crowd. Before policemen asked them for IDs, they politely lifted their hands to their hats and saluted. I thought: “Incredible. Where else would you see policemen saluting an angry drunk crowd of young men”.

Prices were totally out of whack. Just before taking a train to go to Krakow I bought a couple of bananas. The two bananas cost as much as my 300 kilometers’ journey. In a market economy, you would have to pay about 200 bananas for the trip. So relative prices (in this case) were off by a factor of a hundred. Subsidization, which in those days amounted to about 15% of GDP, meant that exports had to be protected: every foreign sale of subsidized goods was a domestic loss. It was a topsy-turvy economy. The newspapers spoke of East Germans who would travel to Poland to buy subsidized food. Custom officials were directed to search cars and stop the outflow of goods.

At times comical scenes ensued. Western goods (rare as they were) were purchased by state import companies using the foreign exchange obtained at the official rate: say, 1 zloty for 1 dollar. They would then sell the goods (e.g., Italian shoes) at that price plus 20% mark-up. They would buy Italian shoes for $100 dollars (100 zloty), add 20 zloty mark-up and sell them for 120 zloty. But 120 zloty at the officially tolerated black market rate was only $30! So people, including foreigners, and my World Bank co-workers, would—whenever the rumors spread that Western goods had arrived—run into these stores and buy Italian shoes at ridiculously low prices.

A system like this could not function much further: wrong prices led to individually rational, but socially dysfunctional, decisions; subsidies could not be financed any more, and the system had to be autarkic in order to protect itself.

On December 13, 1987, exactly six years since the morning when my mother woke me up, all panicky, to tell me that Jaruzelski had proclaimed the state of war in Poland, I walked on a snowy evening around the downtown Warsaw. Everything was quiet and the only thing I could hear was the crackling sound of snow under my shoes. The “normalization” looked perfectly immutable. Even the demonstrations on that day were small and were easily dispersed.

And yet, some thirty years later in New York, the Polish waitress would only dimly remember these words: “stan wojenny”.

The world has changed.

“There’s a decent chance, it seems to me, that is, that victory for university workers in this dispute would provide a major boost for organized labour generally.” Ed Rooksby teaches politics at Ruskin College in […]

Branco Milanovic – On a New Biography of Karl Marx

Your weekend read – an examination of Michael Heinrich’s ambitious and comprehensive portrait of an extraordinary young man Branko Milanović is an economist specialised in development and inequality. His newest  book is “Capitalism, Alone: The […]