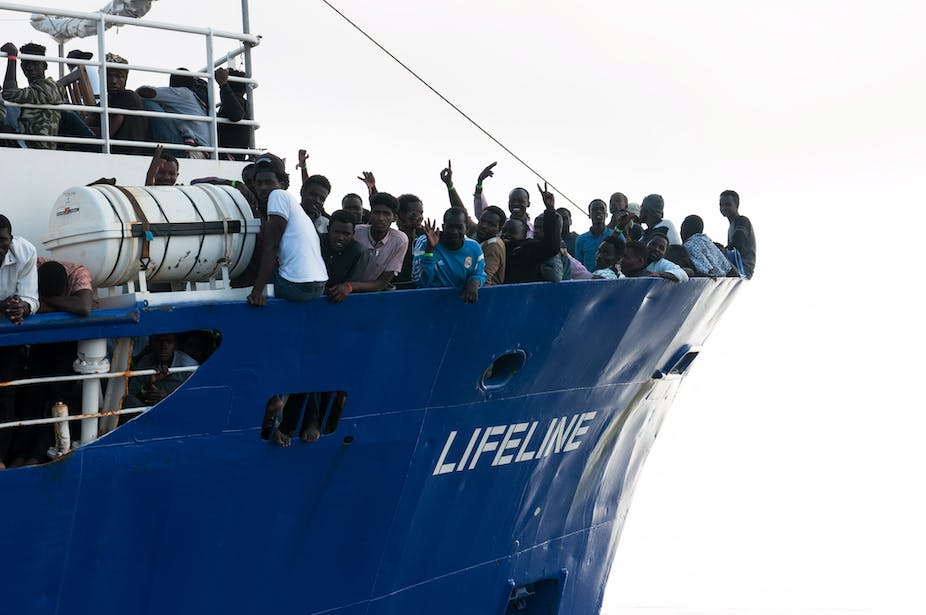 EU leaders reached a last minute “deal” on migration early on June 29, after a desperate scramble to find a way forward had led many to speak out against each other. In conclusions published after late-night negotiations during the June summit of the European Council, leaders called upon the EU Commission and Council to “swiftly explore” proposals to set up “regional disembarkation platforms” in North Africa – where people’s asylum claims could be processed before they arrive in Europe.

But so long as the testimonies of people on the move are ignored, the EU will continue to struggle to deal with a crisis of its own making.

Recent weeks have seen European leaders play political games with the lives of people stuck at sea in order to bolster their position in advance of the June summit of the European Council. As splits multiplied between different leaders across the EU on the issue of asylum, finding a solution that everyone could agree upon became increasingly critical.


As the summit approached, there was still no agreement on reforms to the EU’s asylum system, with debates over responsibility for new arrivals a particular sticking point. The proposal to create regional disembarkation platforms in North Africa diverted attention from the EU’s failure to move forward collectively. In a visit to Tripoli on June 25, the new Italian interior minister Matteo Salvini called for reception centres to be set up on the southern borders of Libya.

The proposal to create processing centres to separate those with a claim to asylum from so-called “economic migrants” has been suggested before. Offshore asylum processing was proposed by the British prime minister, Tony Blair, in 2003, and has since been suggested on various occasions by different leaders in the EU, including by Austria and France in 2017 and by Denmark earlier in 2018.

Since a series of shipwrecks in April 2015 shocked the EU into addressing a so-called “crisis” of migration across the Mediterranean, policies such as offshore asylum processing have come to be understood as benevolent rather than regressive.

Read more:
Migrants have crossed the Mediterranean for centuries – but they used to head from north to south


On this basis, regional disembarkation platforms can be presented by European politicians as potentially acceptable on humanitarian grounds. At the same time, it’s clear such a policy is aimed at protecting EU states from more “unwanted” migration.

Listen to those on the move

But politicians continue to make policy without taking on board the findings of research about why people make the journey to the EU. These include war and conflict, the threat of terrorist or cult groups, being targeted by governments for conscription or for punishment, family problems, societal ostracism, kidnapping, torture, extreme discrimination and exploitation, absence of employment, limited prospects of integration and access to education, language difficulties and violence by authorities or by local populations. People often face many of these difficulties at once, and one problem can be compounded by others along their journey.

As part of a large research project, Crossing the Mediterranean Sea by Boat, my colleagues and I spoke to people who had become stuck in countries such as Libya en route to the EU. They shared stories with us of severe discrimination, a lack of basic rights, as well as exploitation, forced labour and torture. One woman from Cameroon who we spoke to in Rome summed up the situation that many face when she told us: “Total insecurity is pushing us to migrate.”

Read more:
Slave auctions in Libya are the latest evidence of a reality for migrants the EU prefers to ignore


When people cannot travel to the EU, they frequently face a range of other dangers and harms that occur beyond the reach of Europe’s gaze. Although there is more awareness of the dangers faced by people on the move in Libya, there is a broader concern for the well-being of people travelling across a range of countries, including those with which the EU collaborates, such as Turkey. As one woman from Syria told us when we spoke to her in Istanbul in 2016:

The work here, it is work for animals. In the morning, you leave the house and you work for 12 hours. You have to work 12 hours to secure your bite of food and rent for the house. I’m trying to find a better house … This house, it’s not (for) a person to live in. From the smell of the dampness, from the insects.

Even though EU leaders have now agreed to unite around the proposal of regional disembarkation platforms, it does not mean northern African states will agree to such a proposal. Tunisia has already refused to be involved, and Libya has rejected the legality of Italy’s proposed camps at its southern borders. Morocco has also rejected the idea of acting as a host.

Given the EU’s poor record of accepting resettled refugees from Niger via a new resettlement scheme, it’s doubtful that the EU has built the trust required to set up such a scheme successfully in north Africa. It’s unlikely that such a scheme would be safe for people on the move, particularly in light of recent reports of the deaths of many people deported by Algeria and left in the Sahara desert.

Even if disembarkation platforms are put into practice, any ease of pressure on the EU is likely to be temporary because it doesn’t solve the conditions that drive migration in the first place and because the safety of people on the move will not be guaranteed. What isn’t temporary is the creation of longer-term problems by an EU that fails to acknowledge the testimonies of people on the move to Europe. People travel across the Mediterranean Sea by boat for very real reasons, and will continue to take dangerous journeys so long as that is their only choice to live in peace and safety.

Heikki Patomäki – The Finnish University Strike 2018: A New Moment in the Process of Turning Universities into Business Corporations

BRAVE NEW EUROPE would like to thank Heikki for taking the time to write this upon our request. We find it an outstanding analysis, listing the conflicts confronting universities not only Finland, but all over […]

The independence movement in Catalonia is not going to disappear, even if the EU is doing everything to ignore it. Toni Strubell  is a former MP in the Catalan Parliament, journalist, and author of What […]