Since February, more than six million Ukrainians have left their country and as many have been internally displaced. As the Ukrainian army is a male-only institution, the war has led to the separation of many men from their spouses and children. 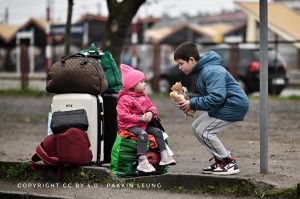 The courage of the Ukrainian population in defending their country against a Russian invasion is astonishing. The way they stand up for their freedom, and in extension for the freedom of citizens of neighbouring countries, is a lesson in sacrifice, bravery, and duty for us all. Since the end of February, more than six million Ukrainians have left their country and as many have been internally displaced. One element of the Ukrainian strategy to fight this war deserves more debate, as it may have unintended, long-term consequences for the welfare and happiness of Ukrainian households: the separation of men from women and children.

This separation is the result of the composition of the Ukrainian army: it is a male-only institution, which by itself is a legacy of the Soviet Union where the army was exclusively for men. When the war broke out, able men between the ages of 18 and 60 were obliged to stay in Ukraine, whereas women and children were brought to safety in other European countries. This policy also affected Ukrainian men who were working abroad but returned to Ukraine rapidly to protect and evacuate their family members. They found themselves trapped in the country and unable to return to their jobs. As these men do not have military training, they are not sent into combat by the Ukrainian leadership but nevertheless have to remain in Ukraine in case they are needed. As they are unable to earn money, this has led to mounting frustration.

The army being a male-only institution is an anomaly in present-day Ukraine. As 47% of the Ukrainian workforce is female, many Ukrainian women work outside the household. Relying on empirical work on gender attitudes and the gender pay gap by Gatskova (2021), post-Soviet Ukraine before the 2014 conflict has been a moderately traditional society: the gender wage gap in Ukraine remained at a relatively high level of 27–33% in 2003–2012 and only a small part of it is a result of the differences in endowments (e.g. education, work experience, economic sector, etc.) between men and women. The discriminatory practices, Gatskova writes, may be nurtured by the respective gender attitudes, and people generally consider lower wages for female employees as justified. Ukrainian women carry a triple burden: they work outside the household, they are paid less, and they do the brunt of housekeeping and child rearing. In addition, Ukraine’s workforce scores high in education levels, including females with a remarkably higher enrolment at the tertiary level compared with males (Danish Trade Mark Development Agency 2022). The average salary in Ukraine before the war was around €400 per month.

At the same time, the country has been one of the most migration-affected countries in Europe. The diaspora’s remittances have become a central part of the economy and they are significantly higher than foreign direct investments. As Frattini and Solmone (2022) write, a specific feature of the Ukrainian migrant population is the unusually high presence of women: 55% on average in the EU, 60% in Germany and Poland, and as much as 75% in Greece and Italy. Many Ukrainian women and men are used to working abroad while their relatives remain in Ukraine. That situation has given rise to households that are split over different countries, what sociologists have termed ‘transnational units’ (Haidinger 2008, 2013). The transnational organisation of a household is a difficult balancing act. Many Ukrainian women who migrate to EU countries for work leave young children behind. Haidinger (2013) reported that the responsibility for caring for the children was in the hands of the father who stayed behind in the cases of only three out of the 23 women she interviewed in Vienna. In all other cases, strong and durable support was given by the (extended) family – the grandmother in the first place, helped by her sister. This is not the case in the event of male migration, where that responsibility falls entirely on the spouse. Migrating women told Haidinger (2013) that their husbands are not able to offer emotional support to the children and that they trust their own mother and sister more.

As these women manage to send on average €300 to €400 home every month, representing 50% of household income (Pieńkowski 2020), they become the de facto breadwinner in the household. This leads to a loss of status for the husband who remained in Ukraine.1 Their inability to find a well-paid job and their perceived unfitness to care for the children leads many women to question their marriage. The distance to the household members who stayed behind leads to alienation, from both sides. In Vienna, they have learned to appreciate a new freedom away from traditional, conservative norms that guide family life. Of the 23 Ukrainian women interviewed by Haidinger (2013), only one managed to stick to her original plan: to stay one year, earn enough money, and return to Ukraine. For all others, the decision to migrate to Vienna became a project with many unforeseen twists. In addition, in her work on Ukrainian migration to Italy, Tyldum (2015) showed that poverty is not the only reason for migration. From her interviews with migrants and non-migrants, she writes that migration can sometimes be motivated by a wish to get away from a difficult marriage, in light of difficult access to divorce in Western Ukraine, because of religion. Her interviewees feel more appreciated by the senior Italian citizens they work for than by their husbands at home.

How does this play out in the current situation of forced displacement? It does not bode well for Ukrainian men for at least four reasons. First, thanks to the EU Temporary Protection Directive, Ukrainian women can now stay legally in EU countries who host them, a major game-changer that complicated the lives of past cohorts of women, of which many were working without a legal permit. Second, the women are this time accompanied by their (young) children, another game-changer compared to past migration where migrated women did everything possible not to be alienated from the children who remained behind, often in vain. Third, the forcibly displaced women are on average more educated compared with the women who migrated to the EU before the war, again improving their chances of finding a well-paid job (Justino et al. 2014, Brück et al. 2019). Fourth, men that survive the war are more likely to be injured, less employable, and thus less able to provide for the household. In addition, many men may suffer from post-traumatic stress disorder and can become more aggressive with their families (Rehn and Johnson Sirleaf 2002). Research indicates that many combatants have difficulty making the transition to peace-time non-violent behaviour after returning home.

This means that there is a lot of scope for intra-household conflict in these transnational household units. The longer the war lasts, and the longer the separation of men from women and children, the more difficult will decision-making in the transnational unit become. When preferences change (as a result of exposure to new norms) and the value of the exit option changes (as the result of new opportunities), a significant number of Ukrainian women may consider remaining in the EU. Whether or not this will lead to increased divorce rates will also depend on the willingness of the men to reside in the EU and the permission to do so. Pre-war divorce rates in Ukraine in general, and in transnational units in particular, were already high.

Fine is four times larger than previous sanctions for ‘false self-employment’ breaches by the company, and is unlikely to be the last The Gig Economy Project, led by Ben Wray, was initiated by BRAVE NEW […]

We are moving from a failed economy to a failed societ. It doesn’t have to be this way. Robin McAlpine is the director of the Scottish think and do tank Common Weal Cross-posted from Common […]

A study by the Fair Work Foundation which rates platform giants against a check-list of fair work standards has found that Ola, Bolt and Amazon Flex met none of the fair work requirements, achieving a […]