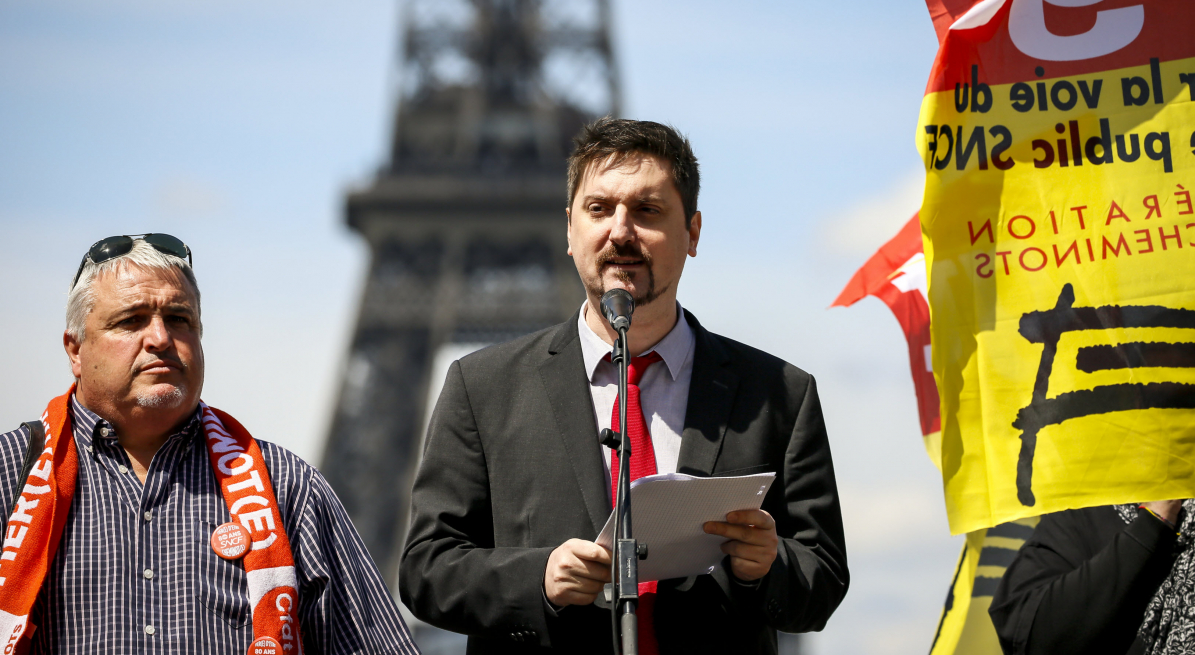 The 147,000 employees of the state-owned French railways, SNCF, have been called on by the trades unions including CGT, Sud Rail, Unsa, and CFDT, to decide by May 21st  for or against the “railway pact” proposed by the government. By calling for this vote the unions are hoping to rejuvenate a protest movement that is running out of steam – even if a “day without trains” is not a good idea.

May 14th saw a resurgence of mobilisation with 27.58% of strikers and 74.4% of train drivers taking action, according to management. Railroad organisations want, above all, to have an influence on the parliamentary debate. After a first-reading vote in the National Assembly, the draft law on railway reform will be examined by the Senate on May 29th. Unions hope for strong participation. “Below 60%, it will be a failure”, said Sébastien Mariani, the leader of CFD-cheminots on France Info. The use of referendums doubles the stakes. The danger of these consultations is not only to gamble and lose, but also that they fail to get a real answer to the question asked. For a railwayman to be for or against the railway pact does not necessarily mean he is for or against the continuation of the strike, or even for or against the principle of reform. A single question invites multiple answers. Through this referendum, railway workers are going to decide on a variety of subjects: opening up to competition, abandoning the status of railway workers employed by new entrants; the approach of government; the management style of SNCF boss Guillaume Pépy; the choice by unions to strike intermittently; and of course – the last hot topic – the possible privatisation of the company.

An official document uncovered on May 13th reports a meeting between SNCF management and the Ministry of Transport; the management of the group insisting on restricting the non-transferability of securities at the holding company level. In other words, the state would remain at the head of the parent company SNCF, but SNCF Mobilités (train management) and SNCF Network (infrastructure) would eventually be privatisable. In the wake of this revelation, the Minister of Transport, Elisabeth Borne, made an attempt at damage limitation. The three companies SNCF, SNCF Mobilités and SNCF Réseau, “are and will remain 100% public and non-transferable,” she affirmed in a tweet.

The unions are counting on victory in this new arena. Whether management or trade union, the initiator of a referendum always gives the impression that he is almost certain to win. The results of a referendum leave little room for the dialogue to continue, but tend to focus on the crisis. The  outcome also tends to be a toss-up. In this case, at SNCF, it is a question of relaunching or stopping the strike movement, to split trades union association or to weaken management. Corporate referendums unavoidably focus narrowly on the company. Employees vote for or against a draft agreement or even a text already signed. The former CEO of Air France, Jean-Marc Janaillac, seemed to be winning, until he put his dismissal in the balance, gambled and lost. The configuration of the SNCF is quite different. Can this referendum of employees which is not directly aimed at the SNCF’s plans but at those of the government, derail the pact which is going through parliament?

Effect of the Macron Ordinances

The only common ground is that the Air France and SNCF referendums have no legal value. The winning side cannot force the other side to accept or reject an agreement. On the other hand, these consultations have symbolic legitimacy. Employers and unions did not expect the El Khomri law nor the Macron ordinances, which reformed the labour law, to test the validity of a project with employees or try to impose it by force. We remember the referendums on the opening of Fnac stores on Sunday or Sephora at night, on the longer hours for no more pay proposed by auto-builder Smart, which used job cuts as a threat. But once the verdict of the ballot box is known, it is always hard for the one who bit the dust to get up again.

In the course of consultations with these major rail and air companies, it is likely that trade unions and management will continue to initiate referendums ahead of such projects; and also in the wake of signed agreements. Because on this point, the El Khomri law and the latest labour law give considerable weight to corporate referendums. They in particular authorise minority unions that are signatories to an agreement, i.e. organisations that have collected at least 30% suffrage in professional elections, to consult the troops to give their opinion on the agreement. The law resulting from the Macron ordinances also authorises the employer to consult employees. And it’s their vote on which the fate of an agreement will depend. Because, in the event that more than 50% of employees vote in favour of a minority agreement, this one becomes legally valid. By their vote, they prevent the majority unions from exercising their right to object. Since the majority agreement (50% of the vote) in the El Khomri law came into force on May 1st – in an area which is no longer confined solely to plans to safeguard employment and working hours – the referendums weaken its scope.

Whether ahead of or after a project, whether the verdict of the ballot box is binding or not, the ordinances set a new trend. Instead of convincing employees, it has become usual to ask them to act as referees, and to designate winners and losers. Robbing management or unions of the right to make choices exposes the weaknesses in French-style social dialogue. Neither side is able to defend his vision and even less to compromise.

As Spain’s Supreme Court considers reimprisonment, Council of Europe call is ignored Toni Strubell  is a former MP in the Catalan Parliament, journalist, and author of What Catalans Want Núria Bassa Camps is a Catalan […]