Many of the protests that took place against Donald Trump during his visit to the UK focused on his policies toward refugees. Amanda Russell Beattie, Gemma Bird and Patrycja Rozbicka argue that while the protesters were right to voice opposition to Trump’s policies, the treatment of refugees at Europe’s borders is just as worthy of criticism.

Amanda Russell Beattie is a Lecturer in Politics and International Relations at Aston University.

Gemma Bird is a Lecturer in Politics in the Department of Politics at the University of Liverpool.

Patrycja Rozbicka is a Lecturer in Politics and International Relations at Aston University. 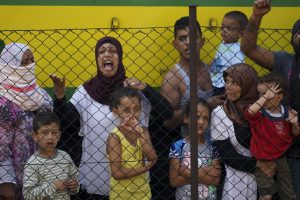 Donald Trump arrived in the United Kingdom with his usual diplomatic aplomb. On the eve of his visit with Theresa May, and an ensuing tea party with the Queen, his topics of conversation included Boris Johnson’s suitability as PM, the problems of May’s ‘soft-Brexit’ package, and Sadiq Khan’s inability to govern a global city, London.

Across the UK, people were ready to protest not just the man himself, but the policies and politics that have emerged since he took office in January 2017. We have, in the last 18 months, witnessed the eventual upholding of a Global Travel Ban denying certain individuals’ entry to the US; the reinstatement of the Global Gag Rule, an ongoing attack on women, within and beyond the United States, to access contraception, clean and safe abortions; and, we have watched pictures of children, separated from their families, sit in cages as they await their fates as migrants seeking entry into the US. Trump also added, for good measure, that immigration was damaging the culture of Europe.

As Trump was arriving in London, we were conducting fieldwork in the Aegean Islands’ Reception Centres (or hotspots) and reflecting on the emerging similarities. The double walled fences, composed of chain-linked fences and razor wire, are a clear signal of the militarisation of the space that is used to process and register new arrivals. For the most part, our access has been limited to the parts of these spaces people want us to see, and even there the similarities are palpable. On our tour of the spaces set aside for families, vulnerable women, and unaccompanied minors, we sat on one side of several gated spaces, reinforced with large padlocks. This, we were told, was for the safety of the various populations.

Not all the centres have padlocks, but the fences and razor wire remain well manned by Greek Police, the military and G4S. Centres are over-crowded (in one, 3,000 people are present in a space intended for 700) and solutions are difficult to find. It can take over 11 months for a first asylum hearing. One woman landing in June 2018 has her first meeting scheduled for April 2019. And this is just the first stage – often timely appeal processes follow. For those who are awaiting UNHCR assisted transfers to the mainland, they must wait for a space to become available. In the week (2-8 July) leading up to our visit, 638 new migrants arrived on the Aegean Islands. Yet only 299 refugees left the islands, 30 percent of whom were supported by UNHCR. Many new boats carrying men, women, and children keep arriving.

As the protesters against Donald Trump took to the streets, it is worth asking why similar attention is not focused on the inhumane practicalities of EU migration policies. Many hotspots lack adequate laundry provisions and the requisite hot water to wash clothing and linen leading to infestations. A lack of capacities (space and translators) means that new arrivals can sit, in wet clothing, for up to 24 hours waiting to be vetted and registered. We were also told stories of parents sleeping in shifts to keep rats out of tents so that they did not bite their children. We wondered at the trash between the barbed-wire fences. Our conversations confirmed that plastic bottles were used as makeshift toilets and then discarded in the morning. It is a coping strategy of women and girls to avoid being attacked after dark.

In the face of rising anti-immigration politics, a grass roots resistance is emerging. It is one premised on solidarity and a vision of a world which respects human rights, diplomatic co-operation, and open borders, and it is in dire need of greater support. As we travel from island to island and Reception Centre to Reception Centre, stories of solidarity among the volunteers supporting new arrivals on the islands are front and centre.

Yet unlike those we encountered on a previous trip in 2017, the stories of volunteers are tempered with an acknowledgment of being tired and worn down. There is now an open discussion of just how much longer they can continue their support. Accompanying the stories of the volunteers and NGOs are stories of innovation and resilience among the refugee populations that live within and beyond centre walls. In the face of over-crowding and a lack of ISO boxes to house families, we were told of how refugees have wired electricity in makeshift ways so that those beyond the camp walls can charge their phones, their shavers and have light.

This ingenuity is an active embodied resistance to borders, to chain-linked fences, and to razor wire that remains in place, long after the secure demarcations have failed to achieve the containment they so desire. It is a reminder, which ought not be needed, that no one belongs in cages. As Hannah Arendt says, as citizens we must ‘prevent wrong doing because the world in which we all live, wrong doer, wrong sufferer and spectator, is at stake.’ So, we must build on the current momentum that Trump’s visit has galvanised and focus our energies not only on his migration policies, but those in Europe as well.

If not, we will be judged and the European Project that motivates refugees in their darkest hours will be rendered obsolete in the process. Europe is not an innocent bystander, the defender of human rights. We, too, are complicit in the caging of migrants within our own borders, and we must build on the momentum of this current protest to challenge the policies that place adults and children alike behind razor wire.

As part of our mobilisation to disseminate information concerning the self-organisation of Gig Economy workers, we would like to recommend a new podcast website: The Gig Bama Athreya is an expert on labour, gender equity, […]

If the US government is dominated by BlackRock  managers, then it should be of no surprise that US financial policy is tailored made for BlackRock Thomas Klikauer teaches at the Sydney Graduate School of Management at […]

The economic recovery is progressing really well in the EU – if you believe the EU political class and mainstream media. It isn’t. And with a lack or leadership and competence there is a rude […]