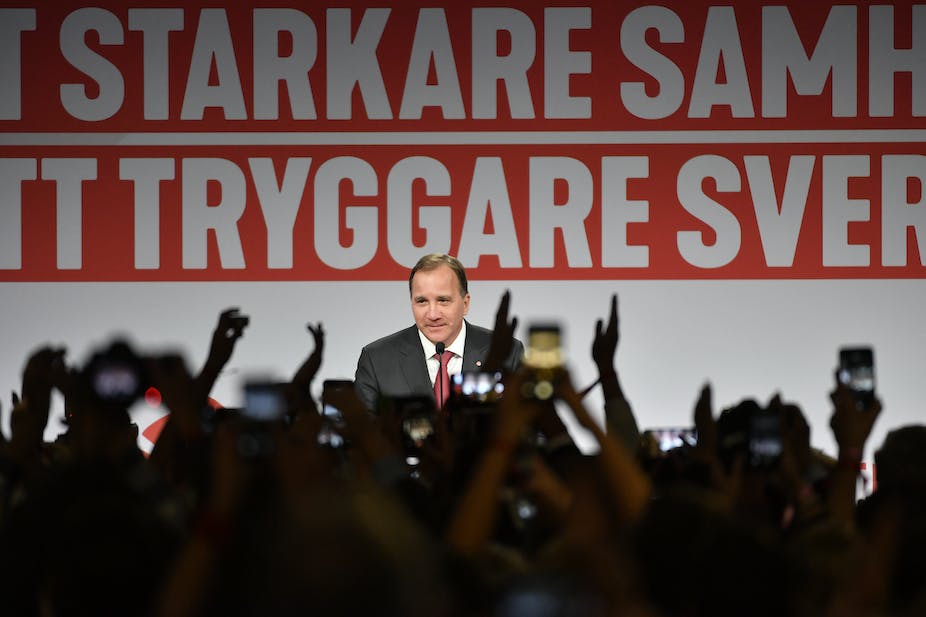 Sweden is recovering after a very tense election night. The centre-right and the centre-left blocs have effectively secured very similar shares of the vote, but neither have come away with quite enough leverage to form a strong government alone.

The far-right Sweden Democrats, a niche party campaigning on a nationalist agenda, registered its highest electoral score to date. Under different circumstances, its vote share of around 4.7% would put it in the position of kingmaker. However, the mainstream parties are extremely reluctant to work with the group, because of its nationalist, exclusivist values.

The preliminary results suggest the Sweden Democrats have fallen short of expectation and that voters have not been as receptive to their anti-immigration rhetoric as it may have seemed. Polls put the party as high as 24% before the election but they collected less than that, 17.6%.

All the smaller parties, except the Greens, improved on their 2014 results at the expense of the two larger parties. The Centre Party, meanwhile, has achieved its best result in 30 years, increasing its share of the vote from 6.1% in the last election in 2014 to 8.6%. The Centre Party had a strong social media campaign, a prominent leader (Annie Lööf) and an agenda with a pro-tolerance, anti-SD message and strong on the environment. The Left Party was happy to take 7.9% of the vote, a 2.2% increase on previous form.

The two large parties have lost votes in a further fragmentation of the party system. The Conservatives were the biggest losers, down 3.5% compared to 2014. Even if they remain the second largest party in the country they appear to have been punished for their embracing a stricter policy on migration and integration in line with that of the Sweden Democrats.

The Social Democrats, who have governed as part of a centre-left coalition with the Greens since the last election, remain the largest party with about 28.4% of the votes. While this performance was much better than predicted in pre-election polls, it is the party’s poorest result since 1908. Nevertheless, prime minister Stefan Löfven did not resign on election night, citing the need for stability.

Now, with a deeply fragmented result, talks must begin to try to work out how to form a government. As Löfven declared on election night, it’s the end of bloc politics in Sweden. Until now, it was relatively easy to form ideologically coherent alliances to govern but the arithmetic is much harder this time. Minority governments are not new in Sweden, since it operates under the principle of negative parliamentarism. This means that a minority can govern, as long as it doesn’t have a majority against it in the Riksdag.

However, the situation created by these results is new. The distribution of votes means that any minority government would either have to somehow secure support from a party in the opposite bloc or work with the Sweden Democrats.

Despite their successes, the Sweden Democrats remain an unlikely coalition partner for the other parties. The only possible way to form a successful governing coalition, therefore, would be for the parties to secure support from their ideological opponents. Speculation about viable options includes a combination of the Social Democrats, the Centre Party and Liberal Party, with parliamentary support from the Greens and the Left Party. On the centre right, the Conservatives could potentially work with the Liberals, the Centre Party and the Christian Democrats. However, it would need some parliamentary support from the Social Democrats.

This fragmentation is part of a wider trend of political volatility in Europe. Smaller parties are gaining ground at the expense of the larger players. Many Swedes have switched parties since the last election, yet one exit poll suggested that the Sweden Democrats had held on to 86% of their 2014 voters, while attracting former Conservatives and Social Democrats.

In contrast, the Social Democrats succeeded in keeping only 66% of their voters from the previous elections, whereas the Conservatives haemorrhaged voters, retaining only half of their 2014 electorate. More Swedes than ever split their ballot: 30% chose different parties at the local, regional and national levels. This suggests that political identity is being diluted. One no longer defines oneself as a social democrat so much as votes for the party based on contextual factors.

But it’s also interesting to note that immigration may not have turned out to be quite such an important factor to voters than expected. An exit poll ranking the issues citizens placed at the top of their agenda saw classic welfare topics such as healthcare, education, gender equality, law and order and elderly care come out on top. Migration and asylum came only eighth on the list. That might explain why the Sweden Democrats didn’t perform as well as predicted. It could also be read as a damning verdict on the current government, which appears to have failed to deliver the quality of public services Swedes expect.

Negotiating the formation of a new government will certainly be hard work but Sweden does not look like a country on the brink of collapse. These results were predicted, as were the subsequent talks among the parties. The two largest parties are open to discussions and the smaller parties have also expressed their intention to negotiate and find a solution for the common good.

Jimmie Åkesson, the Sweden Democrats leader, has already spoken of his willingness to play a role in a government collaboration with the Conservatives and the Christian Democrats. So far, he has been rebuffed, but depending on the final vote count, there may be some give, especially since at the local level almost all parties have already been working together with the Sweden Democrats for some time.

But, ultimately, the far right’s gains have not been sufficient to put it in a position to push as hard as it might on its agenda. Like IKEA, Swedish politics will probably remain defined by its two strongest features: modular and pragmatic.

Steve Tombs – Grenfell Tower: Mis-Trust, Contempt and the Ongoing Struggle to be Heard

Tomorrow is the first anniversary of the Grenfell disaster. What is coming to light is that the causes were all elements of austerity Britain: profit, racism, class war, arrogance, contempt. That is not the end […]

This is an interesting contribution in our ongoing debate about Modern Monetary Theory. Frances Coppola  is the author of the Coppola Comment finance and economics blog, a contributor to Forbes and the Financial Times and […]

Universal Basic Income is an idea which has seen a phenomenal increase in interest throughout much of Europe. In the recent French national elections a number of candidates supported it in various forms. Britian’s Labour […]