Many people might know Universal Basic Income (UBI), but fewer are familiar with Universal Basic Services (UBS), providing essential services according to need, not ability to pay. This  is a collective alternative to the individualist formula of UBI, requiring a more responsible society and pro-active government.

Anna Coote is a Principal Fellow at New Economics Foundation

A similar, but shorter article was posted on the website of Policy Research in Macroeconomics (PRIME). We felt the topic deserved a more extended presentation, which Anna was so kind to provide us with. Thank you very much to Anna and PRIME. 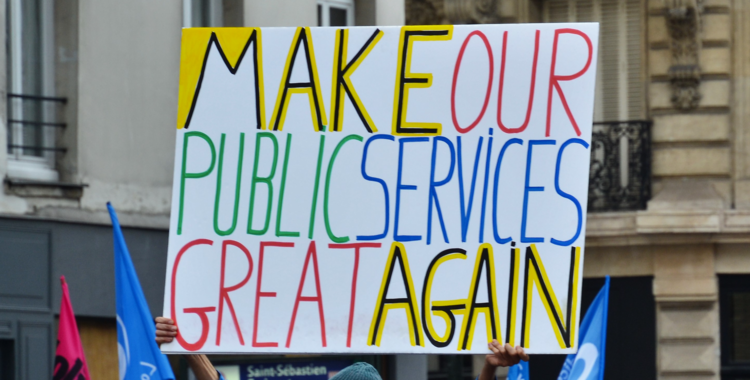 Governments across Europe have borrowed heavily to cope with the Covid-19 pandemic. As the reckoning approaches, what will happen to public services? How far they become targets for a renewed austerity drive will be a matter of political choice. They are doubtless in the frame. Yet now more than ever they have a crucial role to play.

With rising rates of unemployment, poverty and inequality, a new initiative has emerged to strengthen the social infrastructure that supports human wellbeing and economic prosperity. It is known as Universal Basic Services (UBS). In a nutshell, it is a framework for policy and practice to make sure everyone has access to the necessities of life – what we need to live a sufficient and flourishing life – as a right, not a privilege. It offers a route to wellbeing for all, greater equality, full and decently-paid employment, and ecologically sustainable economic activity.

Life’s necessities include education, healthcare, housing, childcare, adult social care, transport and access to the Internet. Each one is met differently, but following the same, principled approach. Some needs are usually met by individual market transactions. Some can only be met through collective action. Others require a combination of private expenditure and public service to achieve universal access.

The case for UBS is set out in a new book . It draws on lessons from the strengths and weaknesses of post-war welfare states and envisages a new system fit for the 21st century. Key features include:

• equal access according to need not ability to pay,

• devolution of power to localities,

• active engagement by residents and service users, working with staff to co-produce services,

• multiple models of ownership and control with all providers subject to the same public interest obligations,

• a strong commitment to sufficiency within planetary boundaries.

Accordingly, the state provides some services directly and otherwise has four essential functions: to guarantee equal rights of access, to set and enforce standards, to collect and distribute funds, and to support and coordinate a range of public interest providers.

What would UBS look like in practice? Drawing on experience in a range of countries, (mainly European) examples of good practice are identified that can be built upon. The main focus is on childcare, adult social care, housing, transport and Internet access, but the same approach could be applied to food, utilities, parks, and other local services.

Here are two brief examples. For childcare, there’s much to learn from Norway, which has a strong tradition of early education and care, integrated into the education system. It has well-qualified staff, relatively high staff-child ratios, a consistent form of childcare setting (the kindergarten), parental involvement in decision-making and continuity of care from age one to six as the norm. The Norwegian system combines ‘a legal guarantee to a place for all children with fees that are both low overall and income-related’. While there can be no direct read-across from Norway, which has a far smaller population and larger per capita income than the UK, it offers a useful model of successful practice, with features that can be adapted to different conditions.

Housing unsurprisingly requires a different approach. It’s not a matter of providing a free home to everyone, or even just a matter of bricks and mortar. A successful housing UBS must focus on the quality and sustainability of neighbourhoods, transport routes, how much control residents have, and affordability. Much depends on the relationship between private sector provision and government regulation. The book’s authors point out that there are lessons to be learned from Austria about land ownership and socially mixed communities, Denmark about co-operative models of ownership, Germany about sustainable housing, and the Netherlands about price control. Usually, the examples are city-based rather than national.

UBS is about more than delivering a service. It’s about designing a package of measures to ensure that people’s needs are met. The nuts and bolts of that package will be different in each case but the package as a whole will comply with the same set of principles. It is possible to make a modest beginning immediately and build the UBS package incrementally – as long as the direction of travel is clear. Key decisions should be made through democratic dialogue.

Among much else, this is a response to the growing campaign for universal basic income (UBI). Income has two components – cash and in-kind benefits (or ‘social income’). These are inextricably linked and interdependent. The less social income you have, the more cash you will need to get by. The more that is spent on cash benefits, the less will be left for in-kind benefits. However, the social, environmental and economic value of social income is poorly understood and seriously undervalued.

To put this right new project under the auspices of Prime Economics has been set up to raise awareness about UBS as widely as possible, among policy makers, service practitioners, academics, community leaders, activists and campaigners, to encourage scrutiny and debate, and set wheels in motion for further research and development.

Amnesty International – Israel’s apartheid against Palestinians: a cruel system of domination and a crime against humanity

For this report, Amnesty examined massive seizures of Palestinian land and property, unlawful killings, forcible transfer, drastic movement restrictions, and the denial of nationality and citizenship to Palestinians. Amnesty International is an international non-governmental organization […]