“Because measures to combat climate change will require great changes in society, we face a major social struggle. A narrow focus on environmental policy issues simply will not suffice.” 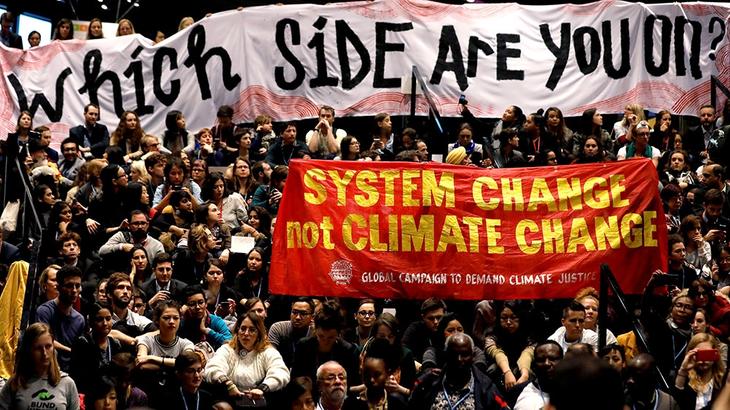 Humanity is currently faced with a number of deep and challenging crises: economic, social, political, over food – and, of course, over climate change, which is threatening the very existence of millions of people. These crises have many of the same root causes, going to the core of our economic system. Both the economic crisis and the climate crisis are thus embedded parts of the capitalist economy. A system which is geared toward making profits rather than producing use values; dependent on economic growth (capitalism without growth is capitalism in crisis); a system exploiting workers and over-exploiting natural resources – one that is also about to destroy planet earth as a place to live for future generations.

However, this multiplicity of crises does not only represent a threat, but also an opportunity. It can contribute to strengthening the mobilisation of social forces needed to break the current trend – in favour of a democratic and planned development of society.

Because measures to combat climate change will require great changes in society, we face a major social struggle. A narrow focus on environmental policy issues simply will not suffice. The climate and environmental struggle must therefore be put into a wider political context. A system critical approach is needed. Increasingly, our entire social model, the way we produce and consume, is under question. The way out of these crises requires a system change and this can only be achieved if we are able considerably to shift the balance of power in society.

Agreement, but no solution

At the Paris Summit (COP21 in 2015), the first ever truly global agreement to fight the climate crisis was concluded. Governments have been negotiating for more than 25 years in order to reduce greenhouse gas (GHG) emissions. However, emissions have not been cut. They have rather increased immensely, by more than 60% since 1990 – and they are still increasing. Transport emissions have increased 120% over the last 30 years, and they are also still rising all over the world – even at a rate that outweighs cuts in other economic sectors. Today, even growth in renewable energy has stalled, and investment is falling.

The stated aim of the Paris agreement is ambitious. The target of keeping global warming below 2oC was strengthened, so that governments should now “pursue efforts” to limit the temperature increase to 1.5oC above pre-industrial levels. The weakness of the agreement is that there is a huge gap between this aim and the measures agreed upon to reach it. Based on the voluntary pledges (so-called Intended Nationally Determined Contributions – INDCs) from all countries on how much they are prepared to cut their emissions, we are so far on course for a temperature increase of 3-4oC. This means climate catastrophe.

The catastrophe, though, can be avoided. It is both possible and realistic to cut GHG emissions sufficiently to avoid the worst effects of global warming. To believe that this will happen by itself, through market mechanisms and through the process of adjusted voluntary pledges every five years, is however a very risky business. To assess that possibility, we should ask ourselves: why have our governments during the last 25+ years been unable to agree on necessary measures – and even more so, been unable to do what science tells us is necessary to avoid climate catastrophe? It is not because of a lack of solutions. The climate crisis can be prevented. We do have what is required in terms of technology, knowledge and competence to avert a climate disaster. It is the power to translate words into action that poses the greatest challenge.

In this struggle, we are up against some of the most powerful corporations in the world – allied to an army of neoliberalism politicians serving their interests. Oil companies are among the biggest and most powerful companies in the world. These firms are using all their power to avoid policies that hurt their economic interests. They execute enormous economic and political power. Therefore, only massive pressure from below, from a broad coalition of trade unions, other social movements, environmentalists and others can save us from climate catastrophe.

This fight against climate change – against climate catastrophe – is not an extra struggle that the trade union movement must take on in addition to fighting austerity. It is, and will increasingly be, an important part of the same struggle. If climate change is not stopped, or limited to the 1.5 or 2oC target, which is within reach if we act rapidly and forcefully, it will actually become job-killer number one. It will destroy communities and it will lead to enormous social degradation. It will further redistribute wealth from the bottom to the top, hugely increasing poverty and causing emigration crises of unknown dimensions. Our struggle to avoid devastating climate change is therefore an important part of the interest-based struggle – the class struggle – over what kind of society we want.

The fight against climate change will require a sea change in society. Activities that adversely affect the climate have to be shut down, while renewable energy, energy saving and environmentally sustainable activities must be developed. For this to be supported by the public, the changes must occur in a way that will safeguard people’s social and economic security and, ultimately, create a better society for everyone. That individual groups of workers have to bear the burden through unemployment and marginalization, will never be accepted. In other words, it has to be a just transition. This can only be achieved in a planned and systematic fashion, i.e. through democratic processes, and it will have to go hand in hand with a radical redistribution of wealth in society.

Put differently, if we are to save the climate, we need a new brand of democratic control – including of the economy. We need an offensive and proactive industrial policy. We need a controlled shift of investment from non-renewable to renewable energy sources. We need a reorientation of existing industries and a re-industrialisation based on renewable energy. We need massive investment in public transport, and free public transport in order to curb the ever-growing emissions in the transport sector. We need a completely new approach to land-use and urban planning, one with the environment and climate at its core. We must strengthen research and development, as well as innovation and skills development. In short, we must do what is necessary to attain the scientific target of keeping the temperature rise below 1.5-2.0°C.

Unify the social with the climate change struggle

The trade union movement will have to play a decisive role in this struggle, because of its strategic position in society. However, trade unions are on the defensive all over the world and they are under immense pressure from strong economic forces. The trade union movement has developed ever more consistent policies against austerity and global warming over the last years. What is required now is a deeper discussion of effective strategies and what is required in terms of mobilisation and forms of struggle to achieve our goals.

Anyway, we need to act rapidly and forcefully. During the more than 25 years of the COP process, we have seen that big oil, big finance, neo-liberal governments and market forces have been unable to solve these problems on our behalf. The same goes for the economic and social crises. The corporations are mobilising all their power to avoid any restrictions on their desperate hunt for more profit. More austerity and more GHG emissions are the inevitable results.

For the trade unions, fighting climate change cannot be a question of sacrificing what has already been achieved. On the contrary, it is about creating a better society for everybody. Transition to an environmental, sustainable society has many advantages. Thousands of new jobs in public transport, renewable energy, house retrofitting and sustainable industry will be created. A reduction of greenhouse gases will also lead to less polluted workplaces and communities. Increased democratic control of the economy will reduce competition and pressure at the workplaces. The end of the over-exploitation of non-renewable resources will open the possibility of a radical reduction of working hours. Less stress, strain and mental pressure will be important effects of such a development.

Growing pressure from below!

The fight against climate change and the fight against austerity cannot be abstract; it has to address concrete problems and solutions in people’s daily lives. We need to unify and make the struggles broader. Most unions today are involved in anti-austerity fights. Ever more unions are joining the campaign against climate change. Initiatives like the Trade Unions for Energy Democracy (TUED) and the Global Climate Jobs Network represent important developments in this regard. What we need now is broad coalitions willing to fight, a more radical agenda, more militancy and thus a growing pressure from below to ensure that the aims and ambitions set out in the Paris agreement can be realised.

How deep will the crisis get? A lot depends on how countries will keep the economic machinery ticking over and combat those knee-jerk reactions to limit deficits, especially in Germany Heiner Flassbeck is an economist, […]

Interesting insights into the French revolution of 1848 by two prominent comtemporaries Branko Milanović is an economist specialised in development and inequality. His newest  book is “Capitalism, Alone: The Future of the System That Rules […]