The Social Democratic Party in Spain (PSOE) has become like the other EU social democratic parties, the representative of business against the people. This newest labour law may well once again be blocked by the Spanish Social Democrats. 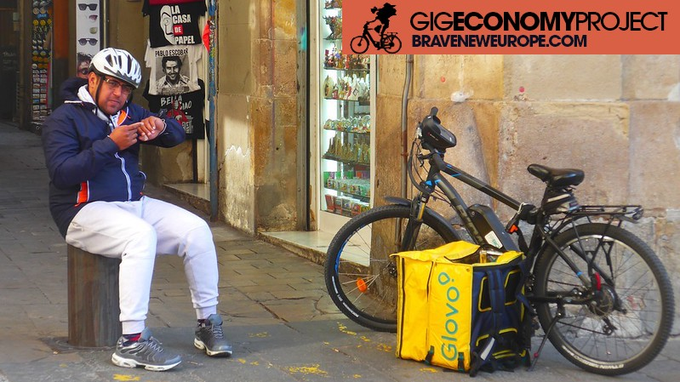 Spain could be the source of the first significant breakthrough for workers rights in Europe since the pandemic crisis began. The PSOE-Podemos Government’s legislative plans to regulate those working for digital platforms – the ‘Stop Fake Autonomous Law’, dubbed the ‘Riders Law’ in the press – is expected to be published this month, before being debated in the Spanish Congress.

The proposals, developed by left-wing Podemos’ Minister for Labour Yolanda Díaz, are designed to eliminate the category of ‘false self-employed’, whereby companies like Uber Eats and Glovo hire workers through their app on an on-demand basis, meaning they avoid the labour costs of social protection, health & safety standards and tax which come with being an employer.

The Stop Fake Autonomous Law is expected to include measures such as a minimum wage, maximum working hours and minimum rest periods, contractual rights including health & safety and the right to union representation.

However, no final text has yet appeared, having originally been expected in August. It has been reported that there is resistance to some aspects of the legislation from within the coalition government. Digital platforms and the powerful employers’ association CEOE are busily working to undermine the Law.

RidersxDerechos (‘RidersForRights’) is a network bringing together riders in unions across Spain, as well as academics and others who support their cause. It has helped organise numerous strikes of riders. RidersXDerechos have been involved in the development of the Stop Fake Autonomous Law, meeting Díaz in June to discuss its content.

The Gig Economy Project spoke to Felipe Corredor Álvarez, a former rider in Barcelona who was fired for union organising and now is a spokesperson for RidersXDerechos, about the status of the ‘Riders Law’, and the experience of the pandemic for riders in the Spanish state.

There has been a lot of media talk and rumours about the status of the Stop Fake Autonomous Law. What is your understanding of what the situation is at the moment?

Felipe: The question is whether there is a need to change the Minister’s plan for the Law or not. The proposal for the Law as it stands is useful, it is explicit in key aspects. For example, that the app is the principle domain of work; not the bicycle, not the bag, etc. It’s the app, and it is the property of the digital platform. We have been working with lawyers and academics and we believe the Law is clear, so there is no need to change it. With this law as it is we will be able to say riders will have rights.

But some lawyers, some companies, some organisations, are trying to interpret this in another way; that it will still allow digital platforms to hire people on a so-called ‘autonomous’ basis. So now, the government want to make some alterations to the language; the same law, but to avoid misunderstandings about the meaning.

Of course what the liberals and right-wing want to do is to change it completely; allowing people to be fake autonomous, to have no rights, to make it cheaper for the company, and so forth. But in Spain we have been winning, winning and winning against those companies, so I think we can win again this time.

Yolanda Díaz has been holding talks with the big employers’ association CEOE and the big Spanish unions, UGT and CCOO, about the Stop Fake Autonomous Law. There has also been rumours in the media of opposition to certain aspects of the Law from within the government, with PSOE vice-president and economy minister Nadia Calviño trying to restrict its remit so it is limited to riders and doesn’t include other platform workers, such as in home care. Are you worried the Law could be changed in to something much weaker?

Felipe: The Minister of Labour, Yolanda Díaz, is aligned with us. The proposal of Díaz and RidersXDerechos is almost the same, only we want the Law to be clear what is work and what is autonomous. The Vice-President, Nadia Calviño, is totally liberal – she seems to be  aligned with the big enterprises, and not committed to workers’ rights. From reading online, it seems like Calviñois with the digital platforms in opposing the Law. What she wants exactly, I don’t know. The big unions; there have been many disappointments in the past, so I don’t know what will happen with that.

There are no guarantees – anything can happen.

How would RidersXDerechos feel about a watered down StopFakeAutonomous Law?

Felipe: For me the important thing is not only the law itself, it is to defend the dignity of the workers. We will support the Stop Fake Autonomous Law if it does this, but not it if it doesn’t. RidersxDerechos will not be happy with the model of France, or of the UK. We are not only fighting for the rights of the delivery workers, we are also committed to fighting for the rights of the whole working class. We are fighting against the Uberisation of the whole working class. If you can’t pay more than a Euro for a delivery, don’t ask someone to deliver it. In Spain now, there is precariousness across the working class. We will not be happy with the advance of Uberisation, not for any workers.

The platform companies like Glovo and Uber Eats say that riders do not want to be employed, they want to be considered self-employed, and that this law will reduce their flexibility. How do you respond to that?

Felipe: It’s a big lie. The real flexibility is only for the companies, not the workers. The workers will only have some kind of slavery. This flexibility, the only thing it allows is to work more hours than is legal. There is an algorithm controlling the hours people work, and counting the productivity. And if you have good productivity you may get more hours, less productivity you get less hours, etc. In the end, people are working hours and hours and hours in order to be financially viable. This means you wake up and go to work, and work until you go to sleep, and maybe a half day free during the week. It is stupid to call this flexibility. It is flexibility for the company to have a lot of desperate workers waiting for an order, willing to work as fast as possible to have a good rating for the client, not always in the safest way.

Spain has been one of the worst hit by the pandemic. How has the situation been on-the-ground for Riders?

Felipe: Everything is bad. When the pandemic hit, the government named some professions which were permitted as essential workers. The healthcare workers were one, and the riders were another. We were shocked, because there was nothing: no protection, no support, no cleaning masks, no gel for the hands. There are pictures of some restaurants which were delivering food, and there are workers close together with no masks or anything. Nobody cares. Riders waiting for a very long time to deliver one hamburger in a pandemic – it was crazy.

The situation now is basically the same. At some point the companies give some masks, but nowadays the masks are very cheap and easy to access – when the riders needed these masks at the beginning, they weren’t there.

Lina Gálvez – On narratives and break-ups: the Brexit referendum and the Catalonian independence initiative compared

Are there parallels between the Brexit referendum and Catalonia’s process of independence? Does a return to national sovereignty offer a restoration of democracy and prioritisation of the common good that are lacking in supranational institutions […]

It is time to accept reality as we have seen it at COP26. Capitalism is simply not capable of preventing climate change. It can only make it worse. Michael Roberts is an Economist in the […]

Frances Coppola – Corona Crisis: When is the Right Time for UBI and Helicopter Money?

Frances’s brilliant book “The Case for People’s Quantitative Easing” examined the strategic use of helicopter money. Today is the wrong time, she concludes. Frances Coppola is the author of the Coppola Comment finance and economics blog, […]