The Gig Economy is the exploitation system of the future. That is why corporations are fighting unionisation so vehemently, so that they do not ruin the business model. 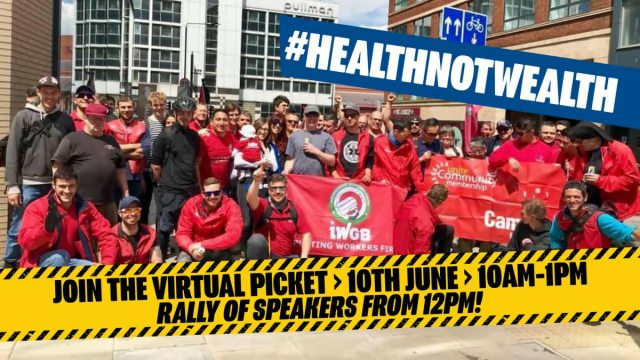 Former Labour shadow chancellor John McDonnell has described today’s strike by medical couriers at The Doctors’ Laboratory (TDL), a major NHS pathology contractor in the UK, as an “iconic dispute” and of “great significance to the future of the labour movement”.

Ten of the fleet have been made redundant, in a move which workers says is a clear case of trade union victimisation and an attempt to break the union.

The dismissals come after three months of TDL couriers working through the pandemic as ‘key workers’, with regular pick-ups of Coronavirus specimens from hospitals and testing drive-through centres.

The company claims that a fall in demand means they now have no use for the ten couriers and officially made them redundant on Tuesday [9 June] after a 30-day ‘consultation’.

However, the union, the Industrial Workers’ of Great Britain (IWGB), say that the ten workers have been described by the company hierarchy as “troublemakers” and that the company has hired a “head of logistics” specifically to get rid of them.

The majority of the TDL ten have been at the core of the burgeoning trade union movement at the firm in recent years, which has been highlighted as an important example of successful gig economy union organising.

One of the ten, Alex Marshall, is a key union organiser who has led workers to getting pay-rises, holiday pay and pensions at TDL in recent years, and blew the whistle on unsafe working conditions for couriers during the pandemic.

He had led union demands at the height of the Covdi-19 crisis on worker health & safety issues, including calling for regular testing of medical couriers handling Covid-19. Sonic Healthcare CEO David Byrne responded on 20 March stating that regular testing was of “no value”, despite the fact the firm is a major testing provider and sells testing kits on the private market.

Marshall, who spoke to The Gig Economy Project last month about the experience of medical couriers working in the pandemic and the lack of support from management, yesterday called on local MP and Labour leader Keir Starmer to actively support the strike. Andy McDonald, Labour shadow employment minister, has raised the issue with the company directly.

The IWGB, a rank-and-file trade union, represents the majority of TDL’s 152 medical couriers in London and the South-East, and they voted in support of the strike at the end of May. The TDL fleet is a mixture of employed and self-employed staff.

The Doctors’ Laboratory is a subsidiary of Sonic Healthcare, an Australian based firm which is the largest medical pathology provider in Europe. TDL made £28 million in profit last year and has paid £75 million in dividends to Sonic Healthcare between 2014-2018. The company announced in April that it was expanding its services in Manchester, from seven to over 60 staff.

A financial report by the company last year said they expected to see “further growth in public and private sector business”, citing NHS privatisation as a businesss opportunity.

“The NHS has identified the pathology sector as a possible source of efficiencies in the coming years,” the report stated. “We are well placed to take advantage of opportunities created by this initiative because of our long experience in supporting and transforming public sector laboratory services.”

In an international solidarity action with the TDL10, the Transport Workers Union in Australia drove around Sonic Healthcare’s HQ in Sydney on Wednesday, and organised a picket.

A virtual strike rally held by the IWGB was addressed by Robert Car an organiser of the May 1 movement in Australia and one of the pickets in Sydney, who said that they want to build stronger international relationships between union organisers in the gig economy.

McDonnell added: “A ruthless company is exploiting workers and trade unionists, taking activists out of the game altogether.

“This is a company that is to a larger extent profiteering from the pandemic crisis, and is linked to privatisation of the NHS.

“If we allow this company to victimise trade union representatives, other companies will do it as well. This is of great significance to the future of the labour movement.

“We are going to win this dispute, we’ve got to win it; we’ll look back on this as an important dispute for trade union rights in this country.”

Owen Jones, Guardian columnist, also joined the rally, saying: “The pay strikes at TDL last year showed that it was possible to organise and win in the gig economy.

“How dare this company victimise trade unionists because of the success they have had in improving conditions at this company?”

Kate Osamor, Labour MP for Edmonton in North London, also spoke, saying that “the actions of Sonic Healthcare is not only bad news for the workers, it’s bad for public health in the UK.”

“Actions like this strike at TDL are the start of the push back against inequalities which have been exposed by Covid-19,” she added.

Jason Moyer-Lee, General Secretary of the IWGB, said over 1000 emails had been sent in to the company protesting the firing of the TDL ten. He added that the union had sent a 67 page dossier about Sonic Healthcare to all its shareholders and MPs. The dossier can be accessed here.

“Sonic thinks the dismissals are the end of the dispute, but it’s not the end, it’s just the beginning,” Moyer-Lee said.

TDL said in a statement last week that it was “exceptionally disappointing that a minority of our couriers have voted to strike in the midst of this pandemic.”

Why did Europe´s economy suddenly pull away from comparable world economies in the second half of the eighteenth century? Branko Milanovic is an economixt specialised in development and inequality. Cross-posted with kind permission from Branko […]

It seemed a sure thing. A vast majority of political parties in Portugal – from far left to neoliberal right – got together four days before Christmas to reward themselves by inserting lucrative loopholes in […]