Ben Wray reports from the Basque country on the Catalan elections, finding both hope and predicament for the independence movement. 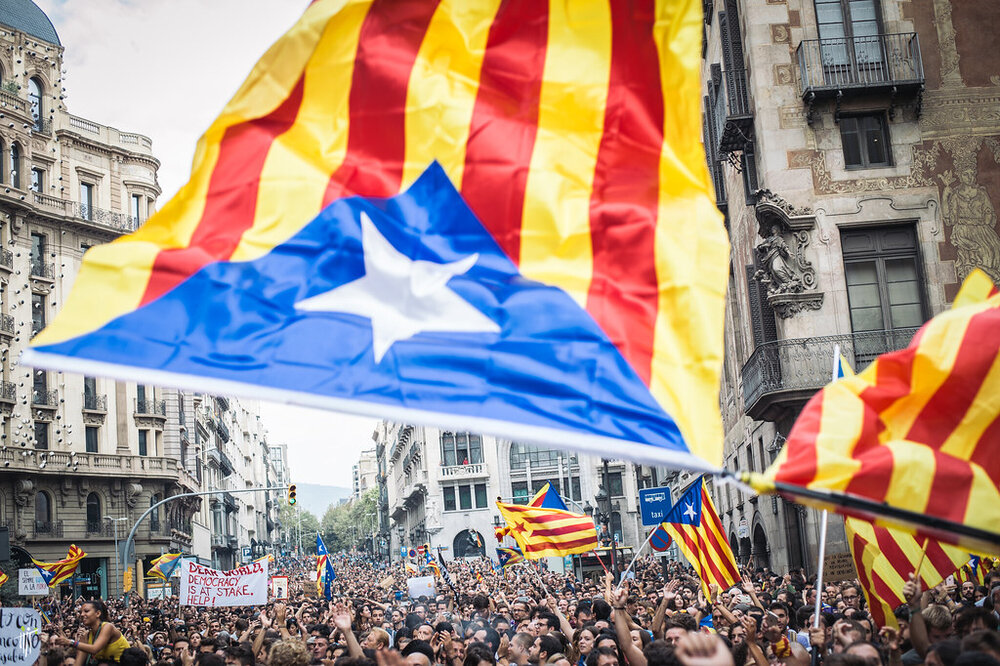 If the Spanish state’s repressive strategy towards the Catalan independence movement was intended to create a rift between its parties and the public, then it has clearly failed. This is the second regional election in Catalonia since the repression of the 2017 referendum, and it’s the second time voters have provided independence parties with a majority, this one stronger than the last, and – for the first time ever – with a majority of votes cast for pro-independence parties.

Since the 2017 election, which delivered Junts Per Catalunya-Esquerra Republicana pro-independence coalition (centre-right and centre-left respectively) we have had the imprisonment of Catalan independence leaders for up to a combined 100 years, the dismissal of Catalan President Quim Torra by the Spanish Supreme court for the high crime of flying a banner on an official government building, and a widening of repression to artists and musicians for such misdeeds as insulting the Spanish monarchy. ‘Lawfare’ tactics have not impressed the Catalan people.

That is the essential starting point for any analysis of this election from an internationalist perspective – that while many independence supporters internationally have bemoaned the Catalans for their ‘adventurism’ in the ‘wildcat’ referendum, the minimum we can say politically about the drama of 2017 is that the Catalan people have taken a much more dim view of the repression than the act of holding a constitutionally illegal ballot. If anything, the polarisation that ensued following the 2017 referendum has hardened support on the independence side, and opened up an honest debate about what an effective independence strategy looks like in the teeth of Spanish authoritarianism.

With the resilience of the Catalan independence movement accounted for, it is necessary to lay out an honest analysis of the complex challenges it now faces to move forward despite this election victory. There are potential openings, but this could just as easily be a moment of political regression.

First of all, we should be aware that this election came in the context of a pandemic which severely reduced turnout, down by an enormous 25.5 per cent on the 2017 election. It’s uncertain exactly how that will have effected the results, but it means we cannot derive any clear conclusions about the level of support for Catalan independence from this election.

Second, the leading party in this election was PSC, the Catalan wing of centre-left PSOE, which is the major partner in the coalition government in Madrid. PSC won 23% of votes, narrowly more than Esquerra on 21.3%, though both parties ended up with the same number of seats (33). That gives the Spanish Government an important wedge into the Catalan parliament, including the first opportunity at forming a coalition (though they are not likely to get very far).

Third, we have seen a radicalisation of the Spanish right-wing in Catalonia, with the neo-Francoist Vox winning 11 seats, more than the other parties of the Spanish right – Ciudadanos and PP – combined. This is the first time Vox has entered the Generalitat, and confirms the broader trend of their rise within Spain, finishing third in the December 2019 General Election. The rise of Vox in Catalonia – a party that seeks the abolition of the Generalitat and re-centralisation of power in Madrid – gives succour to the neo-Francoist street movement and raises the stakes.

Finally, the election result has delivered a slight re-alignment within the independence camp, but one that may have very important consequences. Esquerra becomes the leading pro-independence party in the Generalitat, albeit by just one seat more than Junts, but that is enough to ensure that if an independence coalition is formed, they will get the Presidency. That coalition would also likely include CUP, the radical-left independence party, which has increased its seats from 4 to 9, leap-frogging En Comun Podem (Podemos’ Catalan wing), which remain at 8 seats.

The last time Esquerra, Junts and CUP formed a coalition it delivered the 2017 referendum, CUP being crucial in forcing that to happen. It is unlikely that we will see history repeating itself, though it’s unclear on exactly what terms a coalition between these three parties – who all articulate very different independence strategies – can be formed. Esquerra wants to obtain victories from the PSOE-Podemos government in a slow accumulation of forces for the independence side, seeking no return to the days of 2017. Junts (led by ousted President Carles Puigdemont) is more hostile to the government in Madrid, and (rhetorically at least) demands the result of the 2017 referendum to be respected and independence delivered. CUP seeks a new referendum and a strategy for building state power in the teeth of Spanish state resistance (something totally absent in 2017). In the immediate reactions following the result, Esquerra indicated they were seeking a “broad path”, with a government including En Comun Podem as well as the independence parties, while Junts stated they do not want En Comun Podem in the government because they don’t support independence.

Crucial to whether there will be a new independence drive is the pressure the Catalan independence movement applies on its own parties, but the pandemic (still raging in Catalonia) means street protests are unlikely to become a political force in the country for some time. There are also immediate objectives for the Catalan independence movement, most of all the release of the political prisoners and a general amnesty for organisers of the 2017 referendum. Esquerra will be looking to make these demands the basis for a new independence coalition government.

It’s possible that Spanish Prime Minister Pedro Sánchez could seek the opportunity for deal-making with Esquerra. No formal coalition is feasible, since neither side could be seen to enter government with the other, but if both PSC and Junts abstained on a vote for an Esquerra-En Comun Podem-CUP government in the Generalitat, a deal could be done, presumably around Sánchez delivering major concessions on the prisoners. That seems to be a long shot.

No matter the government formation, if there is an Esquerra President then an even bigger grand bargain could be in play. Sánchez could offer a major expansion of constitutional powers to Catalonia, something closer to the Basque Autonomous Community, which has tax autonomy. If a plan for a referendum on this was put before the Generalitat, a majority could support it.

The section of Catalan capital that tends to be supportive of independence would embrace almost anything which increased the fiscal control of Barcelona, while the grassroots would rightly ask ‘is this really what we have been fighting for?’ A divided Catalan movement would suit Sánchez, though there would also be dangers for him in such a move, not least the fiscal loss to Madrid at a time when the Spanish Government needs all the funds it can get. However, if he could be seen to have resolved the Catalan question in the eyes of most Spaniards it could be his path to electoral victory in 2023.

I have written previously about how independence parties content to play within the constitutional rules of the hegemonic state often become the biggest advocates of federalism in practise. It will take a strong independence movement – committed to the necessity of rupture with the hegemonic state to deliver real change – to keep its leaders moving towards its goal. That’s as true in Scotland as it is Catalonia.

Robin McAlpine – Progress Needs the State, but the State Must Progress

We have so many analyses on BRAVE NEW EUROPE, but no author dissects the reality of failing democracy in the EU better than Robin McAlpine and offering solid solutions to boot. Just substitute the name […]

Miriam Gomes Saraiva – What Next for Brazil-EU Relations?

It has been a mixed summer for relations between Brazil and Europe. In June, the EU and the South American economic bloc Mercosur reached agreement on a free trade deal, but a diplomatic rift has […]

Jonathan Shafi – The New Workplace Fightback is Real and Growing

The increase in workplace militancy around the world is a window of opportunity that has created advances. The state and employers, however, also have strategies to curtail the fightback. Jonathon Shafi is organiser of the […]