Five years after the Paris Agreement, consensus reigns among governments, yet emissions continue to rise nonetheless. Ben Wray, Bella’s European Feature Writer, finds that government greenwash is now our biggest threat, and the European Commission is one of the worst culprits. With Donald Trump out of the White House, governments are, almost without exception, formally committed to tackling climate breakdown again. The Paris Agreement, signed this day [22 April] five years ago by the majority of the world’s governments, now has the United States back among its ranks. US President Joe Biden’s virtual summit today is an attempt to place the US back at the head of global efforts to reduce emissions, with a climate accord with Beijing signed last week one of the few areas in which the US and China can find agreement. When it comes to climate change, consensus reigns.

And that is exactly where the problem now lies. The greatest danger before us in ensuring a hospitable planet is no longer those who deny the problem of man-made climate breakdown or play down its importance. The risk comes from those in power who fraudulently claim to be tackling the problem.

Beware the ones who declare a ‘climate emergency’ in the morning and take a meeting with fossil fuel lobbyists in the afternoon. Who loudly proclaim their ‘world-leading’ targets for emissions reduction in ten years time while signing off on infrastructure projects that will lock in emissions for the next two decades. Who tell us that the recovery from the pandemic will be green while throwing public money at flight companies so that they can survive the pandemic crisis. The greenwashers are our biggest threat now.

There was a remarkable example of this recently, one which reveals just how all-pervasive greenwashing has become in government. The European Commission published its ‘Delegated Act’, which is supposed to create an ‘EU taxonomy’ which would be the anti-greenwashing standard bearer for Europe, defining what is and isn’t ‘sustainable investment’. Except the anti-greenwashing watchdog has been greenwashed.

Tree logging (‘forestry’) and the burning of trees and crops for energy (‘bioenergy’) have been defined as having “no significant harm” to biodiversity and making a “significant contribution to climate mitigation”. A leaked version had also approved the inclusion of some fossil fuels as a green investment, which led to uproar from scientists. Brussels has now delayed a decision on this part of the Taxonomy until later in the year.

“The EU taxonomy was conceived as a science-based gold standard to avoid greenwashing,” 266 scientists wrote in an open letter to the European Commission. “With such a proposal the taxonomy itself would become a greenwashing tool.”

The ‘NextGenEU’ recovery funds for member-states is another example of what, on the face of it, looks like a sea-change in terms of climate action: 37 per cent of funds have to be spent on ‘climate protection’. But scratch beneath the surface and all is not as it seems.

As FT commentator Wolfgang Münchau has pointed out, “the European Commission classifies investment in terms of 0%, 40% and 100% green content, and rounds up the numbers to the next higher target. So 1% becomes 40%. 41% becomes a 100%.” In theory, then, if a member-state handed over all their recovery funds to the fossil fuel industry, as long as they spent 1% of that money on windfarms, they would have met the Commission’s criteria for climate protection. No wonder environmental groups are warning about the potential for “fake green projects”.

“I also don’t believe this charade will work politically,” Münchau adds. “When the mendacity of the EU’s climate policy becomes apparent, the centre will not only have lost the victims of the economic crisis, but an entire generation of young voters. This is the thing with smoke and mirrors: when the smoke lifts, you see clearly.”

To understand how this can happen, just take a look at the sort of people the EU Commission’s senior climate & energy representatives held meetings with in the 100 days after the EU’s ‘Green Deal’ was launched. 151 meetings were held with big businesses, while 29 were held with public interest organisations, the European Corporate Observatory (ECO) finds. On average, the Commission’s top Green Deal people were having two meetings with fossil fuel lobbyists a week in that time. And that is just the meetings of top officials which have to be officially recorded: about 300 people out of a total staff of almost 30,000.

The revolving doors between the Brussels corporate lobby and EU staff matters too.

“Aleksandra Tomczak…whose responsibilities include the internal energy market and the Just Transition Fund, worked for almost five years until 2015 for the World Coal Association, the lobby group for the coal industry,” the ECO’s ‘A Grey Deal?’ report states. “Although the time elapsed between both positions is long enough that it is not covered by EU ethics rules, she’s the official most targeted by the fossil fuel industry for Green Deal meetings.”

Even when the ‘Green Deal’ is funding genuinely green projects, it is using a mechanism which looks suspiciously like a huge corporate subsidy scheme. The Green Deal report by McKinsey, a hugely influential consultancy firm, finds that out of the €28 trillion in investment which it believes is needed to decarbonise the EU over the next 30 years, at least half “would not have positive investment cases.”

“Without targeted intervention, businesses and consumers would likely make decisions different from those laid out in our cost-optimal pathway,” McKinsey add.

In other words, tackling climate breakdown doesn’t fit into capitalist business models. There are two ways to address that: 1) take capital out of the equation and instead rely on public investment for publicly-run decarbonisation projects, or 2) throw huge public subsidies at the private sector to make green investments profitable. It’s the latter option which is prevailing, you can tell because the fossil fuel industry appear very happy with the EU’s Green Deal. 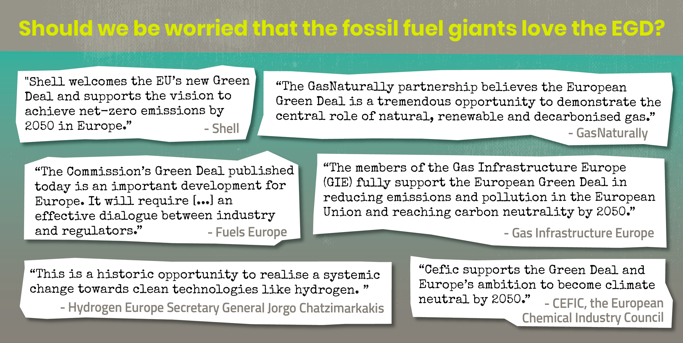 “The EU…will use public money to guarantee private investments, “de-risking” them in an effort to seduce capital to participate in the decarbonisation process,” David Adler and Pawel Wargan of Diem25’s ‘Green New Deal for Europe’ campaign write. “In other words, the Green Deal is a privatisation scheme: it seeks to enclose the opportunities afforded by the green transition — to rebuild Europe’s infrastructure, to create new sources of renewable energy, to develop technologies that can drive decarbonisation — in service of private capital accumulation, rather than exploiting them to expand public ownership and democratic control.”

The false dawn of the pandemic

Once one looks past the nonsense verbiage of the greenwashers, the raw facts are that we are running out of time and still moving in the wrong direction. Earlier this month the world reached a new landmark of carbon dioxide levels in the atmosphere, at 421 parts per million.

“It’s halfway now between the pre-industrial level of CO2 in the atmosphere [280 parts per million] and a doubling of CO2 in the atmosphere,” said Professor Andy Pitman, the Director of the ARC Centre of Excellence for Climate Extremes. “So that’s quite profound. It took 80 years to do half of that work and 30 years to do the second half of that.”

For a time, the pandemic shut down the global economy, bringing hope that one ecological crisis could help alleviate an even greater one. Alas, that was another false dawn. Although emissions did fall at the peak of the crisis, the first two months of 2021 saw global emissions greater than January and February 2020, before the world entered lockdown.

Europe is no exception, with emissions up 2.9 per cent on the previous year in the EU + UK. Despite emissions from aviation falling by over 60% and ground transport by 3.8%, increases in emissions from housing (14.4%), power (11.2%) and industry (0.1%) more than made up the difference. 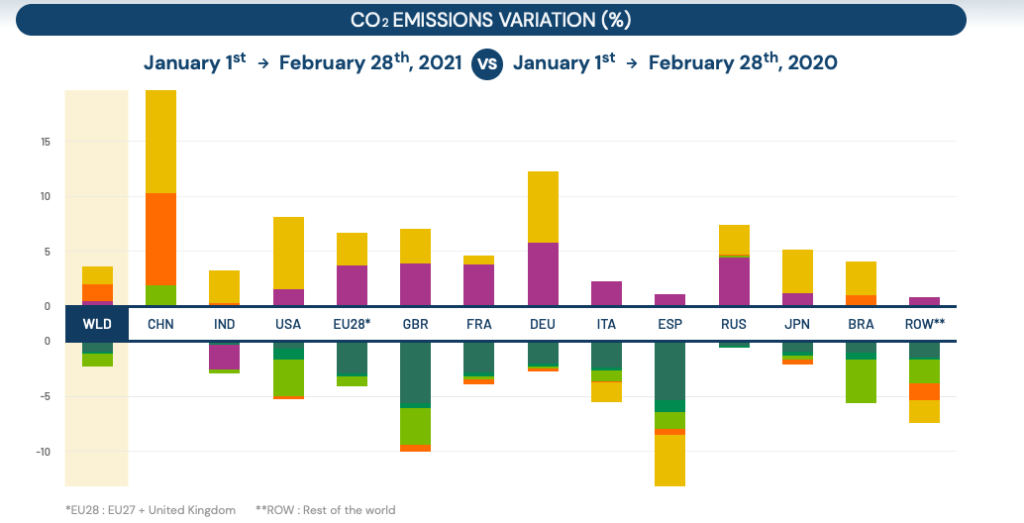 The International Energy Agency say 2021 will see the second biggest rise in emissions in history. 2022 could see even higher emissions as air travel returns. As soon as the juggernaut of globalisation could rev up its engine again, it has done so, with the full blessing of governments around the world desperate for the return of GDP growth by whatever means necessary. That’s the brutal truth about the real priorities of the powerful.

A new legally binding EU Climate Law was agreed on Wednesday [21 April] which will see an “at least 55%” greenhouse gas emissions reduction above 1990-levels by 2030 (up from  a previous target of 40%), bringing the EU in line with its Paris Agreement commitments just in time for Biden’s summit. That summit will be laying the ground for COP26 in Glasgow, where world leaders will once again meet to pat themselves on the back for their increasingly ambitious targets for a date in the distant future. And all the while the world burns.

Greta Thunberg has said she will snub COP26, arguing it should be delayed until the whole world had vaccines to ensure there was equal opportunity for participation. She also questioned the true value of these summits until there is genuine evidence of urgency on the part of world leaders.

“To be frank, the changes need to come from people demanding climate action,” she said.

“We can have as many of these meetings and conferences as we want but as long as we are not really treating the climate crisis as a crisis, we won’t see any real changes coming from them,” Thunberg added.

Richard Murphy – Brexit: What I think Labour should be saying on Europe

During the Brexit debate we have concentrated our coverage on the real cause of the successful referendum: the destructive neo-liberal policy of the EU that has caused so much suffering and misfortune for so many. […]

Alone the fact that the Times feels it has to address Modern Monetary Theory (MMT) shows how relevant it has become. When we launched BRAVE NEW EUROPE at the end of 2017 only a handful […]

Transport & Environment – €8.5m Ruling against Ryanair State-Aid just the Tip of the Iceberg

The EU has ordered €8.5 million in illegal state aid to be recovered from Ryanair in the latest indication of how extensive public subsidies are to aviation, one of the fastest growing sources of carbon […]