Is the EU Great Discontent spreading into other regions?

Ben Wray is a freelance journalist based in Oñati, and produces a morning newsletter called Common A.M., which you can sign up to at CommonSpace.Scot/Newsletter 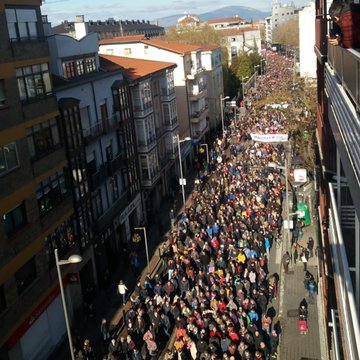 A General Strike in the Basque Country (northern Spain) demanding “work, pensions and decent lives” was held today, with mobilisations in all parts of the Basque territory in what union leaders have said is just the start of an “offensive”.

Picket lines have closed several main roads and shopping centres, with a number of arrests and video footage of police attacks on demonstrators. Major mobilisations have been held in the Basque Country’s four main centres: 50,000 in Bilbao, 35,000 in Iruñea (Pamplona), 35,000 in Donostia (San Sebastian) and 25,000 in Vitoria-Gasteiz.

The strike has seen unions join forces with strong feminist and pensioner social movements in recent years, based on ‘The Charter of the Social Rights of the Basque Country’. The Charter includes demands for “an end to precariousness”, a minimum wage of 1,200 Euros, a maximum 35 hour working week, affordable housing, a rise in the state pension and “a public, universal and free social services system.”

The strike’s aims are directed at the government’s of the Basque Autonomous Community, Navarre and Spain, but the movement has also worked to establish links with the Northern Basque Country in the French state, with a train station in Hendaya being blockaded earlier today.

France has been rocked since the beginning of December by a movement combining the social movement of the Gilet Jaunes with trade unions in resisting attempts by President Emanuel Macron to raise the retirement age.

Heren Muruaga, member of the LAB trade union, who participated in the initiative in Hendaye, told Gara: “They also want to change the retirement system in Spain, based on the capitalist system”.

“Because the situation is linked we all have to fight together,” Muruaga added.

The run-up to the strike saw verbal clashes between the Basque Government – headed by the Basque nationalist party EAJ-PNV with support from Spanish left party Podemos – and trade unions, which accused the Lehendakari Iñigo Urkullu of seeking to deny public sector workers the right to strike by applying an “excessive” definition of minimum government services on employees.

Urkullu has refused to meet strike leaders, claiming that the demands of the workers have nothing to do with the Basque Government, a position criticised by the unions. While pensions are set in Madrid, EAJ-PNV has negotiated funding increases out of successive Spanish governments, but has been accused of having questionable priorities, with a controversial high-speed train project (known as “‘The Basque Y’ and seen as largely benefiting the business class) being at the centre of infrastructure funding demands in recent years.

As for Podemos Euskadi – which only struck a deal with the Basque Government on a new budget after the PSOE-Podemos coalition emerged in Madrid following the November General Election – it has refused to participate in the General Strike, a position that has caused division within the party across Spain. Lander Martínez, Podemos Euskadi leader, said that the new Spanish coalition government needed to be given time, but this position was criticised by by Teresa Rodríguez, the party coordinator in Andalusia (southern Spain), who said: “We cannot say in Euskadi that we should not go on a general strike because we are part of the Government.”

A protest took place in the Andalusian city of Granada earlier in the week supporting the demands of the Basque General Strike. The movement of ‘Pensionistas’ has seen protests across Spain for the past two years, but has been particularly strong in the Basque Country. Organisers of the General Strike said that it came about in response to s call from the Pensionistas for a “qualitative leap forward” in their struggle.

The Basque Autonomous Community will go to the polls later this year, with an election set to take place by October 2020 at the latest (no date has yet been set). Strikes could therefore be a feature of the election debate, with union leaders today warning that if there is no serious response to the strike demands within the next two months, new action would be scheduled for the Spring.

Lars Syll – Why the ‘analytical’ method does not work in economics

Deductivist models and ‘analytical’ methods disconnected from reality are not relevant to predict, explain or understand real-world economies. Lars P. Syll is an economist at the Faculty of Education and Society at Malmö, Sweden Cross-posted […]

The rate of price inflation first depends on the growth rate of value creation Michael Roberts is an Economist in the City of London and a prolific blogger Cross-posted from Michael’s Blog Photo: TSGT MICHAEL AMMONS, USAF […]

We normally do not post series, but this one is definitely worth the exception. Steve Keen is a Distinguished Research Fellow, Institute for Strategy, Resilience & Security, UCL Cross-posted from Steve’s Blog The Volcker recession […]