The Catalan Independence Movement is in crisis. Toni Strubell explains the developments. 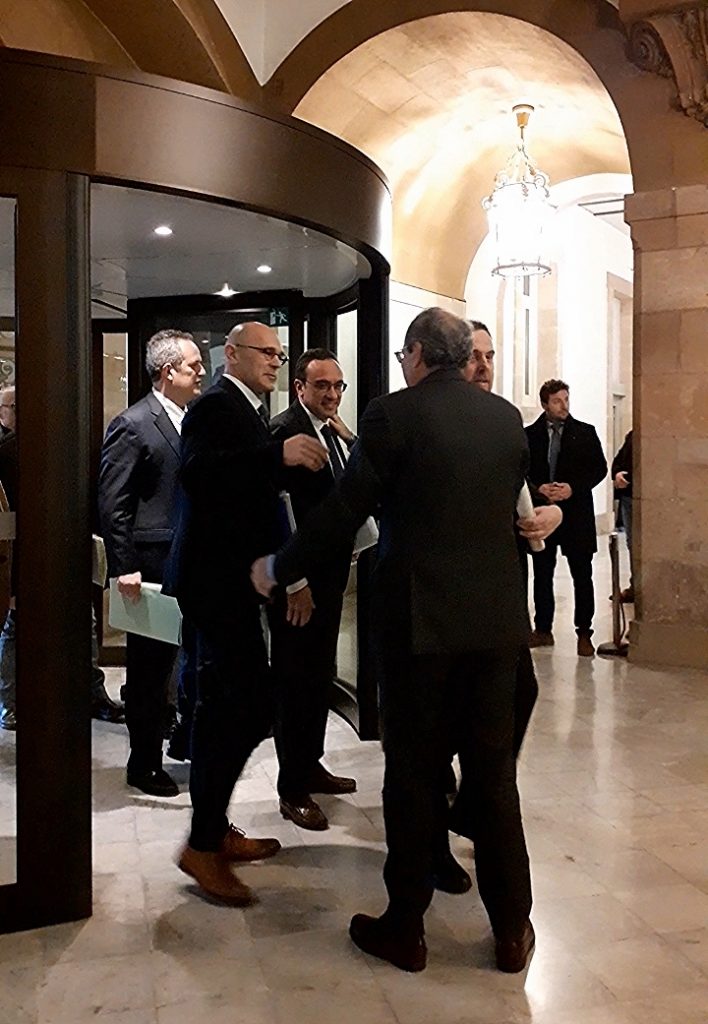 President Torra (with his back to the camera) welcomes ex-ministers Forn, Romeva, Rull and Junqueras into the Catalan Parliament building after two years absence in prison.

The Rt. Hon. Quim Torra, 131st president of Catalonia, announced last Wednesday 29th January that he would put an end to the current legislature and call an election as soon as the budget has been passed by the Catalan Parliament in the coming months.

Although the election date cannot yet be given, this announcement confirms the intense division there is in the current pro-independentist government made up of the Republican followers of Oriol Junqueras (ERC) and the coalition led by Carles Puigdemont (Junts per Catalunya). It was this latter group that unexpectedly pipped ERC at the post thus gaining the all-important right to appoint the candidate to the Presidency after the December 21st 2017 election. But this was not the only surprise, however, as those elections, which had been called by the Spanish government during direct rule (a measure introduced with a view to oust the independentist majority after the October 1st Referendum that the Constitutional Court had deemed unconsistutional) were unexpectedly won by the independentists once again.

But there is one much more solid reason for bringing forward this election: President Torra’s debarment –pending his appeal to the Supreme Court– from holding public office and, therefore, the loss of his seat in the Catalan Parliament. This was triggered by the president’s initial refusal to obey the Central Electoral Board which called on him personally (at the behest of the opposition) to remove a banner hanging from the Catalan Government’s balcony with a yellow ribbon calling for the release of the nine imprisoned Catalan prisoners (the speaker of the Parliament, six ministers and two social leaders). Incidentally, this banner did little more than repeat what a UN Working Group on Arbitrary Detentions document had expressed (https://www.ara.cat/en/Group-Arbitrary-Detention-immediate-Catalan_0_2264173804.html). His delay to follow this order, on grounds of freedom of speech, was deemed to be contempt of court by the High Court of Catalonia, which is subject to Spanish law. Before his appeal to the Supreme Court was heard, the Electoral Board jumped in and declared that his debarment was to take effect immediately. The Supreme Court, which has yet to hand down its verdict, turned down his request for a precautionary suspension of the debarment. The fact is that the Catalan Parliament’s Rules of Procedure state that candidates to become Catalonia’s president must be members of the Catalan Parliament, so this has created an unprecedented situation. Though prime minister Pedro Sánchez has not called off a meeting with Torra –whom he continues to regard as president– in early February, it remains to be seen whether there will be leeway for Torra to retain the capacity to call elections as legitimate president of Catalonia and do so before the Supreme Court’s final judgement.

But what happened last Monday 27th January is more serious for Torra and will surely go down in the log as the worst moment for the multiparty independentist coalition that has ruled in Catalonia since the independence “Procés” began in 2012. On that day, ERC MPs did not support a motion is favour of maintaining president Torra’s seat regardless of the court ruling. In line with this, they also failed to applaud Torra’s defiant speech, that of a politician who has certainly been the most outspoken supporter of the idea of staying faithful to what he sees as the independence “mandate” emanating from the Referendum result. The fact that the Parliament failed to give support to his continuity as an MP must certainly be seen not only as the coup de grace to the legislature, but the most dramatic split to date in the pro-independence camp.

Nonetheless, this scenario of division in the indy camp is nothing new. The twenty-one months that the legislature has lasted have been marked by constant feuds between the Republicans and Puigdemont’s group, Junts per Catalunya. At its outset, the speaker of the Parliament, Roger Torrent, had refused to defy a Spanish Supreme court ruling to the effect that Carles Puigdemont’s candidature to the presidency could not be accepted. This decision was seen by Junts per Catalunya as an affront against their leader. It has marked the whole legislature.

Time has revealed that the Republicans – especially their Parliamentary speaker– were unwilling to take any steps that might lead to further repression against the independence movement, already widely persecuted in the Spanish courts. Meanwhile Puigdemont’s coalition has adopted an attitude which is apparently braver –in rhetoric, at least– as may be seen by the reactivation of the Crida Nacional per la República (National Call for the Republic), now an openly electoral platform, and the calling of what promises to be a major political rally in Perpignan (French Catalonia) scheduled for February 29th next.

But this week has also produced more news that cannot be overlooked. Tuesday 28th saw the first return to the Catalan Parliament of six of the ex-ministers involved in the 2017 Referendum, all of whom have now been in prison for approximately two years. The “excuse” –as the opposition parties termed it– for this visit, was for them to take part in a parliamentary commission to discuss the controversial application of Constitutional article 155 to “temporarily” suppress Catalan home rule. The opposition parties boycotted the Commission from the very start with the exception of unionist Ciudadanos who were present just for Junqueras’ intervention to show their disgust at the session having taken place at all and to blame him for the turn of events resulting from the “illegal” Referendum.

Other parties, both independentist and not, showed their full personal support for the six ministers (Oriol Junqueras, Jordi Turull, Raúl Romeva, Quim Forn, Josep Rull and Dolors Bassa) and expressed their will that they may soon be free, as demanded by a good many international bodies. In their speeches, the six ministers –almost in defiance of what had happened the day before– showed their determination to continue in the struggle for a Catalan Republic and showed no regrets about their overall performance in 2017. Dolors Bassa, the only woman in the group, made a plea against losing heart and called for the concerted action of the independentist parties.

The long and emotional parliamentary day ended with hundreds of supporters singing “Els Segadors” (the Catalan national anthem) on the Parliament’s main staircase as the ex-ministers made their way out of the Parliament on their long haul back to Lledoners and Puig de les Basses prisons. It is the very scene where President Puigdemont made his final speech in the Parliament when it had become obvious that Spain was in no way going to acknowledge the result of the Referendum nor accept any form of negotiation as so many international bodies were at that time demanding.

Wolfgang Streeck – The Missing Chair and the Missing Democrat

Sofagate” or how EU presidencies legitimise Recep Tayyip Erdoğan’s regime. Wolfgang Streeck is the Emeritus Director of Director the Max Planck Institute for the Study of Societies in Cologne, Germany Cross-posted from El Salto (in […]

Jan Rovny – The ‘Brahmin Left’ vs the ‘Merchant right’: A Comment on Thomas Piketty’s New Book

Many of Piketty’s conclusions  touch on important shifts that have taken place in recent decades. Among the most important is the reversing role of education in political alignment: while highly educated voters once backed parties […]

Nick Shaxson, Ben Phillips – How to Fight Inequality: A Chat

Inequality is out of control in pretty much every country in the world. The Tax Justice Network and many others have laid out a range of policy prescriptions for change, and now even the world’s […]