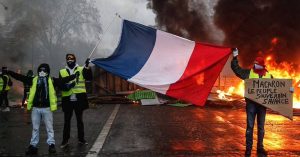 Because I am suffering from insomnia (due to the jetlag) I decided to write down, in the middle of the night, my two quick impressions regarding the recent events in France—events that watched from outside France seemed less dramatic than within.

I think they raise two important issues: one new, another “old”.

It is indeed an accident that the straw that broke the camel’s back was a tax on fuel that affected especially hard rural and periurban areas, and people with relatively modest incomes. It did so (I understand) not as much by the amount of the increase but by reinforcing the feeling among many that after already paying the costs of globalization, neoliberal policies, offshoring, competition with cheaper foreign labor, and deterioration of social services, now, in addition, they are to pay also what is, in their view and perhaps not entirely wrongly, seen as an elitist tax on climate change.

This raises a more general issue which I discussed in my polemic with Jason Hickel and Kate Raworth. Proponents of degrowth and those who argue that we need to do something dramatic regarding climate change are singularly coy and shy when it comes to pointing out who is going to bear the costs of these changes. As I mentioned in this discussion with Jason and Kate, if they were serious they should go out and tell Western audiences that their real incomes should be cut in half and also explain them how that should be accomplished. Degrowers obviously know that such a plan is a political suicide, so they prefer to keep things vague and to cover up the issues under a “false communitarian” discourse that we are all affected and that somehow the economy will thrive if we all just took full conscience of the problem–without ever telling us what specific taxes they would like to raise or how they plan to reduce people’s incomes.

Now the French revolt brings this issue into the open. Many western middle classes, buffeted already by the winds of globalization, seem unwilling to pay a climate change tax. The degrowers should, I hope, now come up with concrete plans.

The second issue is “old”. It is the issue of the cleavage between the political elites and a significant part of the population. Macron rose on an essentially anti-mainstream platform, his heterogenous party having been created barely before the elections. But his policies have from the beginning been pro-rich, a sort of the latter-say Thatcherism. In addition, they were very elitist, often disdainful of the public opinion. It is somewhat bizarre that such “Jupiterian” presidency, by his own admission, would be lionized by the liberal English-language press when his domestic policies were strongly pro-rich and thus not dissimilar from Trump’s. But because Macron’s international rhetoric (mostly rhetoric) was anti-Trumpist, he got a pass on his domestic policies.

Somewhat foolishly he deepened the cleavage between himself and ordinary people by both his patrician predilections and the love of lecturing others which at times veered into the absurd (as when he took several minutes to teach a 12-year old kid about the proper way to address the President). At the time when more than ever Western “couches populaires” wanted to have politicians that at least showed a modicum of empathy, Macron chose the very opposite tack of berating people for their lack of success or failure to find jobs (for which they apparently just needed to cross the road). He thus committed the same error that Hillary Clinton commuted with her “deplorables” comment. It is no surprise that his approval ratings have taken a dive, and, from what I understand, even they do not fully capture the extent of the disdain into which he is held by many.

It is under such conditions that “les evenements” took place. The danger however is that their further radicalization, and especially violence, undermines their original objectives. One remembers that May 1968, after driving de Gaulle to run for cover to Baden-Baden, just a few months later handed him one of the largest electoral victories—because of demonstrators’ violence and mishandling of that great  political opportunity.