This may be predatory capitalism in Wild East fashion, but the same structures and methods are to be found in capitalism in the Western nations. It is called private equity. 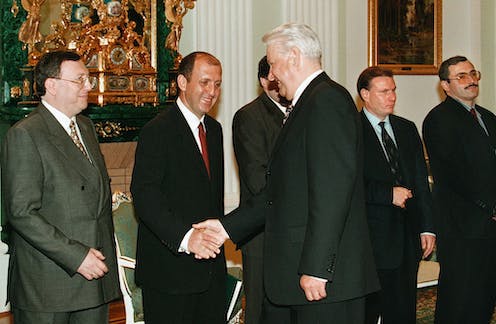 Almost all books on Russia are depressing. Paul Klebnikov’s (Forbes Russia editor) brilliant, extremely well-documented and eye-opening “Godfather of the Kremlin”(published in 2000) is no exception. Although it is focused on Berezovsky’s “career”, it is much more than that: it is about how Russia transited from state socialism, not to what in the “pensée unique” media was called market economy, but to a rule of kleptocrats and the mob.

The book covers the entire de facto and formal Yeltsin’s rule, from the failed Communist coup in August 1990 to Putin’s election in 2000. The judgment on the Yeltsin’s rule is severe and just: “For the Russian people the Yelstin era was the biggest disaster (economically, socially and demographically) since the Nazi invasion in 1941” (p. 320).

What actually happened was the privatization of all government functions and the transfer of ownership to which over decades, if not a century, millions of people contributed, often having been paid miserable wages. That wealth created by millions and owned by the state was then frittered away or given to several hundred individuals, most of them with no merit except for the ability to manipulate others, to know how to run private militias, and to be free of any moral scruple. They thus became immensely wealthy.

To his credit Klebnikov distinguishes between kleptocrats who wished to at least create something, that is to maintain or create running enterprises, from the kleptocrats whose objective was to destroy as many enterprises as possible. Among the first group he puts Vadit Alekperov, then and now the manager and part-owner of Lukoil, and even in part Gusinski (currently in exile in Israel), and in the second category, Berezovsky, Abramovich and many others, only slightly less evil or less successful in their ill intentions.

Klebnikov very clearly explains the modus operandi of the destructors, mostly through Berezovsky’s actions and his direct statements collected in the interviews. The destructors’ approach was simple, efficient and apparently never imagined by the hundreds of creative and highly paid US and Western “advisers” to the Yeltsin government. Instead of privatization being used to increase enterprise efficiency as these ingenues believed, it was used by Berezovsky and others to destroy the enterprises. The first and the most important step was “privatization of profits”. Berezovsky discovered it in the early 1990s when he “raided” a large auto maker Avtovaz and he kept on applying it even since.

The approach consists in co-opting the management of the target companies either through financial inducement (division of the loot) or through threats which, if not operative, lead in many cases to reluctant managers suddenly drowning in rivers or jumping from the windows. Once the management is co-opted, it intentionally makes decisions that go against the interest of the company and its workers. In the case of Berezovsky and Avtovaz it meant that the company sold its cars at less than the production cost to auto dealerships established by Berezovsky. Very simple: if the production cost of a car is 100, you sell it to Berezovsky for 50; he then sells it to customers for 200 (market price). He takes 150 and divides it with you; the company loses money, fires people, goes bankrupt, stops production and is auctioned off for peanuts. If you believe there is still something worth looting you buy it for almost nothing; if not, you just move to another company to destroy.

Berezovsky applied the same trick over and over again. In the case of Aeroflot (which he “conquered” thanks to Yeltsin’s daughter), he created a number of subsidiaries which ostensibly managed Aeroflot foreign exchange flow. They managed it in a very particular way. You paid $100 for your ticket. That money, instead of going straight to the Aeroflot account would instead go to Berezovsky’s who would then lend (yes, lend) $100 to Aeroflot at interest rates of 30% per year and moreover assess a “management fee”. Aeroflot was lucky to have received $1 out of $100 that you paid for the ticket. At times, Aeroflot would actually owe money to Berezovsky.

Berezovsky and Khodorkovsky applied the same approach to the Russian government. They would be allocated, under various pretences, government money which they would lend back to government at usurious rates.

The focus on Berezovsky is only one part of the book. It is the whole system that is indicted. The alliances and enmities were formed from case-to-case and while a group of oligarchs were together on one deal, they would fall out in the next and, then in some cases, commission contract killings. What is today at times represented as a free-wheeling Yeltsin “democracy” was, as Klebnikov documents detail-by-detail, gun fights between the “siloviki” of the various kleptocrats, or their mutual accusations  aired on the TV channels they controlled.

But we shouldn’t forget the political enablers of kleptocracy. The key was Yeltsin (personally not corrupted) and his family and close environment (thoroughly corrupt). The origin of kleptocracy predates the famous loans-for-shares deal in 1995-96. It goes back to the last years of the Gorbachev reforms, but then accelerates under Yeltsin, fuelled in large part by the hysterical fear of Communists’ return to power. Zyuganov was no Stalin but in most of Russian and US media he was portrayed as such. This gave a license to “reformers” to privatize as soon as possible, giving things away practically for free and stimulating looting in the correct expectations that (a) the new owners of the looted property will use their wealth and control of the media to twist the election results in  favour of Yeltsin and, (b) once property has either been destroyed or privatized with money stashed abroad, there would be nothing for Zyuganov’s communists, even if they were to come to power, to nationalise. This was the political—and absolutely crucial—underpinning to kleptocratic privatization. Without that we cannot understand why a country would want to destroy itself.

When electoral spinning was insufficient, stronger tactics were used. Yeltsin disbanded the Parliament when it began impeachment proceedings against him and eventually bombed the deputes out. I doubt The Washington Post today would support the same “democratic approach” if used by Trump. But it did for Yeltsin in 1993.

Klebnikov is very critical of “young reformers”. I do not think he is fully right there because Gaidar, in early 1992, had no option but to liberalize prices lest the county falls into famine—so horrendous were the conditions at the time. Klebnikov disagrees with Chubais, the mastermind of privatization, but he gives him credit for having realized, after the 1996 election, that the government needed to change course, stop the lawlessness of Berezovsky and friends, and arrest them.

This is not a history with shades of grey. This is history with darkness and a few, far between, points of light: Yavlinsky, the perennial oppositionist; Gromov, the gruff general; Primakov, the short-lived Prime Minister.

Epilogue. Berezovsky, who managed to manipulate everybody, eventually manipulated Yeltsin into anointing Putin as his heir. But hubris caught with him: he thought that Putin will be at his beck-and-call. It turned out differently: Berezovsky had to flee to England, where after squandering much of his wealth, he lost the remainder in the most expensive lawsuit ever filed against his erstwhile associate Roman Abramovich. He was found hanged in a mansion where his former wife allowed him to live rent-free.

Much more sadly, Paul Klebnikov, a brilliant journalist and economic historian (I ran into Klebnikov’s writings first time when I found his Ph D dissertation on Stolypin reforms here) was murdered on a Moscow street in 2004, when an assassin fired nine bullets in him. It is especially poignant to think that Klebnikov in describing many political and financially-motivated murders of the 1990s unwittingly described his own too: cause of murder, unknown; assassins, unknown. Case closed.

Michael Hudson, Ellen Brown – Let the Banks Go Under and Put Money Into the Real Economy

“The Federal Reserve helicopter only flies over Wall Street. It doesn’t fly over the economy” Michael Hudson is a research professor of Economics at University of Missouri, Kansas City, and a research associate at the […]

Despite the global recession and pandemic, there are signs that a workers’ movement in the digital platform economy is developing. To mark International Workers’ Day, Ben Wray looks at key developments in platform worker struggles […]

This is a further report from the UN climate talks in Bonn, which we have been featuring in BRAVE NEW EUROPE By Chloe Farand Cross-posted from DeSmog UK   The UK government has been accused of “double standards” […]