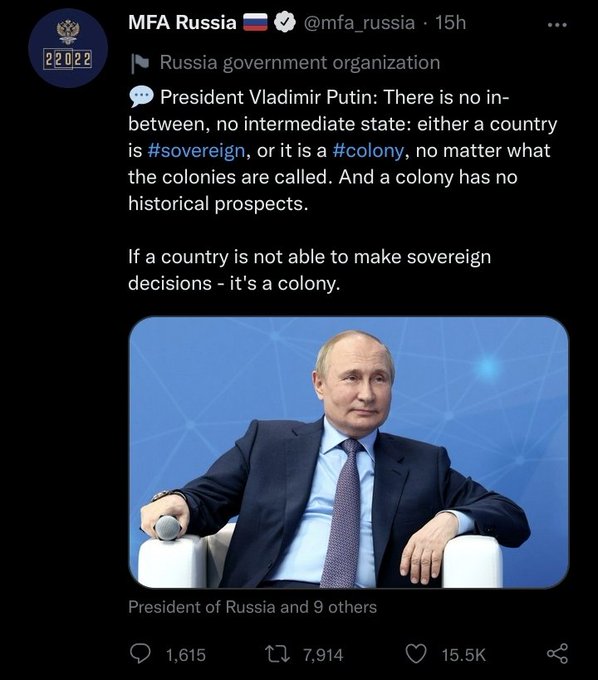 By any standard indicator that measures the achievements by the extent to which the stated objectives have been realized, Russia’s war against Ukraine has been a failure. Ukraine is much more militarized than ever; it is probably one of the most militarized countries in the world right now; Russia’s security has markedly deteriorated; NATO has not returned to its 1997 positions, but has further advanced and become much more consolidated. The West is stronger than before. So, is Putin failing?

Perhaps. Or perhaps not. For suppose that the real objectives of the “special military operation” were not the announced ones, but very different.

Sovereignty vs. income. To see what they might be, I have to go back to my October 1996 paper published as a World Bank Working Paper and later in an edited volume (available here) which I recently briefly summarized on Twitter here. The paper is pretty complex because it deals with economic and political forces that lead countries to create unions and conglomerates, or to prefer secession, but its core model is simple. It is as follows. Countries (and their leaders) aspire to two goods: sovereignty and wealth. Sovereignty means freedom to make political and economic decision as little constrained by other countries as possible; wealth means having high income level (high GDP per capita). Now, the problem is that there is a trade-off between these two objectives. Countries can become rich only if they become less sovereign, that is more globally integrated. To be rich requires to trade, develop technology jointly with others, send people abroad to learn new skills, consult with and even hire foreigners. All of this implies much greater interdependence between the economies and observance of international norms and rules regarding trade, intellectual property rights, domestic economic policies, convertibility of currencies and the like.

To fix the ideas take the two extreme examples: North Korea and Belgium. North Korea is practically unconstrained in its economic and political decision-making: it can make nukes because it is not a signatory to the non-proliferation treaty, it can impose tariffs or ban imports of goods as it likes, it can print as much or as little money as it wants because its currency is not exchangeable for any other etc. But, for all these reasons, it is also very poor. On the other end of the spectrum is Belgium, which does not have its own currency, whose fiscal policy is hemmed in by the EU rules (the Maastricht treaty), trade determined by the EU and WTO (Krugman, as cited in my 1996 paper: “Europe’s 1992 is not so much a trade agreement as an agreement to coordinate policies that have historically been regarded as domestic”), foreign policy decided by the EU, and military engagement by NATO. In terms of domestic policy autonomy or sovereignty, it practically has none. But it is rich.

Other countries will be aligned along the different points of the sovereignty-income trade-off. The size of the county will matter also: the US will enjoy more sovereignty for a given level of income because it is a big country: it issues a reserve currency, it is the main actor in a number of trade negotiations, it leads NATO etc. But it will not be immune to the trade-off. Consider Trump’s decision to start the trade war with China. It gave greater political space to the US (including the very ability to impose new tariffs), but it probably reduced its income.

Russian isolationism. Now, with this idea of a trade-off between these two desirable things, let’s go back to Putin and his group of advisers from the power ministries. Suppose that they came to the following conclusion: Russia’s attempts to Westernize since Peter the Great have been a failure. Russia failed to catch up with the West prior to 1917, it then it adopted an extreme Westernizing doctrine that diminished Russia by giving independence outright to Finland, Poland etc., and then proclaimed equality of nations and self-determination for all which ultimately led to the break up of the country in 1992. Afterwards, it adopted liberalism, also imported from the West, whose results were the dramatic impoverishment of the population, increased mortality and suicides, and the astounding stealing of assets created by the millions of Russian citizens. During that period Russia lost its ability to decide alone on its policies: it blindly followed the West. It offered its military bases in Kyrgyzstan to the US; it got nothing in return; it acquiesced to limited expansion of NATO, but was treated to an expansion up to its borders; it joined various European bodies, but only to be criticized by them; it privatized its economy as Western experts suggested, but all the money went abroad. Thus, in order to regain its economic and political autonomy, it needs to break decisively with the West. It needs to become an independent Eurasian power whose interaction with Europe will be limited to the minimum. Eventually, Russia has to move in the direction opposite from the one charted by Peter the Great in the early 18th century.

West builds the Iron Curtain. Such increase in sovereignty would lead to lower income. But the problem is: neither would the break with Europe, if announced by the leaders, nor lower income, be welcome by the population. Russian government cannot thus, on its own, begin to create a new Iron Curtain. But what if the Iron Curtain were built by the West against Russia as a punishment for something that, from the Russian point of view, could be considered an entirely justified policy? Enter Ukraine. Reconquista, in some ways, was always popular among the Russian public. But the West will not see it as such but will impose sanctions and pile up costs on Russia. The West would, by its own will, cut Russia off from Europe. It will build a new, impenetrable Iron Curtain. The objective of detaching Russia from the West –desired under this scenario by the Russian leadership—will be achieved not by the Russian leadership, but by the West. The Russian leaders will not be seen by its population (or at least not by the majority of the population) as responsible for undoing Peter the Great’s dream. On the contrary, the West will be seen as unwilling to accept Russia as an equal partner, and Russia hence will have no option but to become a Eurasian power, fully sovereign, untrammeled by treaties and rules, and free of Western ideologies of Marxism and liberalism.

The new Brest-Litovsk. But, in the longer-run –the leaders might fear—would not people, having realized that the greater sovereignty comes with lower income, try to find some accommodation with the West? How to avoid this? How to make the rupture permanent? The only way to do so is to make the costs of returning to the West extraordinarily high. That is, to make sure that, when the first feelers of reconciliations are sent by the post-Putin governments, the bill submitted by the West will be so high that most of the Russian policy-making elite and the public opinion will reject it out of hand. Think of another Brest-Litovsk, but this time without Lenin who put all his power and authority on balance to have it accepted. The new Brest-Litovsk may include not only the withdrawal of all Russian forces from the Ukraine, and the return of Crimea to Ukraine; it might include reparations, extradition of officers responsible for war crimes, reduction in the size of the army, limits to military exercises, even possibly control of Russia’s nuclear program. Thus, the Putin government has an incentive to make the West pile up demand upon demand from which it will have hard time climbing down. For only such extensive and even unreasonable demands will ensure that they are rejected by the successor Russian governments, and that the anti-Petrine policy favored by Putin and his entourage will remain in force for a very long time.

This does not mean that the current government is totally indifferent to the cost of sanctions. But it will accept increased sanctions so long as the income cost of new sanctions is less than the gain in sovereignty. At some point, it will decide that the trade-off had gone far enough, and at that point it will negotiate. But before it does so it will make sure that it has gained sufficiently, and for a long time, in the ability to independently decide on its policies.

The implication of this way of seeing the Russian objectives is that sanctions and decoupling between the West and Russia are no longer seen only as costs that Russia is paying, but rather as West doing what the current leadership believes is in the fundamental long-term interest of Russia: breaking off of all links between Russia and the West, and thus freeing Russia to follow its own course.

The outdated notions of class and the continued romanticizing of “the working class.” Guy Standing is a Professorial Research Associate at the School of Oriental and African Studies, University of London and the co-founder and […]