There has been a storm of criticism concerning the Italian government’s plan to increase the deficit, which in fact would be good policy. What is problematic is the type of measures and, above all, the forecast for GDP growth for 2019: not only is the international economic situation unfavourable, but also the times play against it.. And the real reforms needed are nowhere to be seen.

Cross-posted from Blogging in the Wind (in Italian) 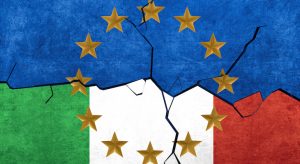 Is it really such a reckless move to decide for a 2.4% deficit? Is it completely unlikely to say that next year’s GDP will grow by 1.5%? Judging by the reactions these forecasts have provoked – more at a political and institutional level than at a market level – it would seem that these objectives contained in the Italian government´s Update Report to the Def (the programmatic fiscal budget 2019-21), are the work of a band of madmen.

Perhaps the economist Mario Nuti is right to speak of “hysteria”. In his blog, he comes to the conclusion that the deficit would not increase the debt-to-GDP ratio and, using the IMF’s estimates and prudently assuming a growth in 2019 of 1% and an inflation of 1.4, he derives that the ratio would not increase to a deficit of 3.04%. But Nuti, who is a serious economist, takes stock of the real data, while the EU Commission uses “structural” data, i.e. data based on the calculation of potential GDP: a method that even a study group set up by the Commission back in 2013 considered unreliable and that Italy has been contesting for some time without obtaining any feedback.

The claim of 1.5% growth is more problematic. Another economist, Massimo D’Antoni, observes that “the estimates of the impact of the fiscal package proposed by this government appear to be completely in line with those considered valid by the previous government (and generally accepted as reasonable by the research institutes)”. However, he continues, problems could come from international economic developments, which show signs of a slowdown; not to mention that the amount allocated to investments (which would give the strongest boost) amounts to just 0.2% of GDP. In the government’s own Note, on p. 29, as Ruggero Paladini writes, there is an estimate of the effects that exogenous variables could have: world trade -0.2; nominal effective exchange rate -0.2; oil price -0.2; hypothesis of better conditions on debt service +0.2. Unfortunately, says Paladini, the only variable that would have a positive effect is also the most unlikely, while the others could occur – hopefully not simultaneously.

But even the figures are not favourable. The growth of 2018 will most likely be – writes the Parliamentary Budget Office  in its report – at 1.1% (but with the correction for calendar effects you have a rate of 1%), after the last two quarters that would mean 0.1% both quarters. This entails that the “drag” (i.e. the growth already acquired with which it will start in 2019) will be only 0.2%: to close the year at 1.5%, it would be necessary for all four quarters to reach the mark a +0.5%. The last time this occurred was in the ’90s. The Parliamentary Budget Office comes to a different conclusion, for example on the growth rate assumed for investments. It can be observed that for years the government  has not been capable of carrying out  planned investments, and indeed from 2010 to 2107 for this variable there was a negative growth, and for 2018 the same Note corrects the +2.5% provided by the Def to  -2.2%. Thus, it seems rather risky that it points to a growth of 16% in 2019 and 10.7% and 7.1% in the following two years.

And then there is the question of timing. The 5 Star Movement has said that the minimum wage will be introduced in April: even if they make it (which is far from sure, given that the organisation will be complex) the first fiscal quarter will already have begun. The other measures are also very difficult to implement by the first of January, without mentioning the (few) investments, which take notoriously long and do not even have an immediate effect. In short, with all the good will it must be said that if the government meets its objectives we could speak of a miracle. Especially since GDP growth at 1.5% really seems a chimera.

So what? Aligned and co-opted, and obey European rules? Obey the IMF, one of whose representatives angrily stated that “the fiscal policy under discussion goes in the opposite direction to the IMF’s suggestions”? I recommend with regards to the IMF’s suggestions to ask the Greeks for references. The former IMF chief economist Olivier Blanchard in the meantime has exercised self-criticism, admitting that major mistakes had been made in the case of Greece, but obviously these lessons have already been forgotten at the IMF. In reality, the measures adopted by the Italian government are a step in the right direction: when the economy slows down, the state must spend more, not less. Then, of course, we must see how it spends. And this fiscal package is no miracle.

The fact is that growth is not achieved by putting numbers in a document. It is important that they are the “right” numbers, but that is only the premise. True reforms would be fundamental, reforms that previous governments have never accomplished because they were too busy cutting welfare, reducing workers’ rights, inventing unlikely constitutional reforms, and occasionally handing out tips to companies (many) and potential voters, who all thanked them with the gesture of the umbrella (The Italian version of the middle finger). The real reforms are to make the public administration work (“It has been destroyed”, said Finance minister Giovanni Tria), to learn how to create projects, without which investments do not flow and European funds are lost (i.e. the money that we have paid to Europe), to reform civil justice, to stop razing universities and research to the ground. All these things are complicated and, above all, with very little appeal to the public:  the war on migrants is much more appealing to voters.

If the current Italian government had talked less, quarrelled less with everyone, put a little more investment into the fiscal package, and above all showed that it wanted to concentrate on those reforms, the markets would certainly not have had a problem with a few decimal places of difference and would have ignored the lightning bolts thrown by the zombies in Brussels, expiring officials who, on their return to their respective countries, will in many cases find their old parties reduced to historic minimums. Decimals only count when governments are not credible.

An interesting possibility, which would help reduce the power of big electricity providers and their destructive energy monopoly. Interestingly Italy has initiated a programme that has some similar features. By Dan Gearino Cross-posted from Inside […]