As Richard Murphy pointed out, governments have to decide if they wish to save people or the economy (read here). Most Northern European nations have decided for the economy for the time being (Denmark made a quick volte face on Wednesday). 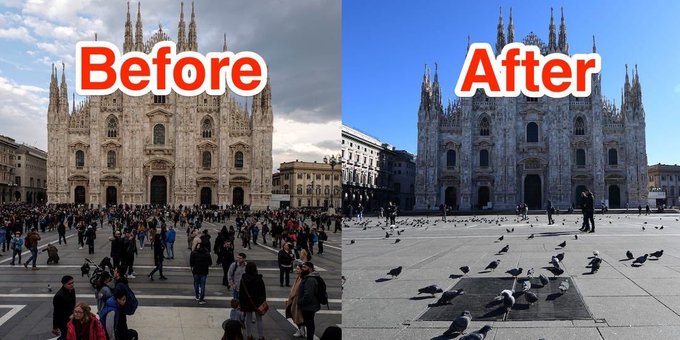 It is difficult to write about Covid-19 because, above all, this is a human tragedy – behind every statistic are a manifold of individual human stories. Still the statistics are very important, because they may help us to learn how to save lives in the future. At the level of government, Covid-19 is a test of leadership. If your death rate ends up significantly higher than other countries, then you have failed.

Even at this stage we can see that not all countries are on the same trajectory. This graph from the FT shows that in most cases we are seeing a 33% increase in cases per day.

A 33% daily growth rate is staggering and beyond anything in our usual experience. At this rate it only takes 80 days to infect everyone on the planet. Or to put it another way, if you borrowed a pound at an interest rate of 33% per day, after 80 days you owe 8 billion. We are just not used to this kind of growth rate. As many have written about exponential growth, you look at the numbers and think, it’s fine, it’s fine, it’s fine, … oh, it’s not fine! Significantly Japan, Singapore and Hong Kong have a lower growth rate. The same is also true of Taiwan. These countries learnt from SARS and acted quickly.

There is another famous quote about exponential growth, “no exponential lasts forever”, and you have to be very careful about extrapolating. Extrapolation predicts hundreds of thousands of deaths in the UK, but if that happened it would be an enormous failure of leadership. Leaders are there to implement policy to turn the curve over. China did it, and as we can see in the FT plot above, S. Korea is starting to do it. Whatever your growth rate, the most important consideration is to turn the curve around (from rising to falling) as soon as possible.

More important than cases, is the number of deaths. We might regard the total death rate per capita at the main indicator of success or failure. Below is a graph of deaths per day for China, S. Korea and Italy. We can see that China, who started from a position of not knowing what they were dealing with, eventually implemented the right measures to turn the curve around, and are now starting to see deaths in the 10s per day rather than 100s per day.

Very worrying and tragic is the case of Italy where the death rate is still rising exponentially and is already higher than the highest levels reached in China. Italy has now gone into more extreme lock down and hopefully this will start to turn the curve over soon.

The question for leaders of other countries, currently showing the same case growth as Italy, are you doing enough now?

How to make billions with crypto and lose them again. Frances Coppola is the author of the Coppola Comment finance and economics blog, which is a regular feature on the Financial Times’ Alphaville blog and has been cited […]