The week starting March 9th has been another difficult one for the Spanish government as regards minority issues and, more particularly, the way in which the trial against the Catalan independentist leaders (February-October 2019) was conducted. Mr. Fernand de Varennes, U.N. special rapporteur on Minority Issues, this week published an 89-point report which, in points 67-70, pinpoints major shortcomings in Spain’s treatment of the Catalan minority. 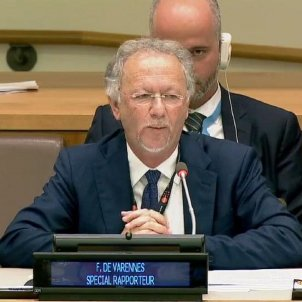 In his 17-page report (A/HRC/43/47/Add.1), U.N. rapporteur Mr De Varennes –who visited Spain 14-25 January 2019– overtly joins other U.N. colleagues in showing “grave concern” about restrictions placed on, criminal charges against, and the subsequent trials and sentences of political figures and protestors belonging to the Catalan minority. The Special Rapporteur on the Promotion and Protection of the Right to Freedom of Opinion and Expression had issued a statement on 6 April 2018 in which the Spanish authorities were urged to refrain from pursuing the criminal charge of “rebellion” against those political figures and protestors, indicating the incompatibility of the charges with the events occurring, that at no time involved violence or incitement to violence of any nature. He defended that all acts had been carried out in the context of freedom of expression, including peaceful protest and dissent, a circumstance that neither prosecutors nor the sentence itself were to take into account at the trial, at which hefty convictions of up to thirteen years prison were given.

In his report (point 68), the rapporteur also backs the findings of the U.N. Working Group on Arbitrary Detention (document 6/2019) and criticizes the extended detentions of two members of civil society organisations -Jordi Sànchez (former president of the Catalan National Assembly) and Jordi Cuixart (president of Òmnium Cultural)- as well as the former vice-president of Catalonia, Oriol Junqueras, to the effect that the criminal charges brought against them were to “intimidate them because of their political views”. In so doing, the rapporteur refers to the similar conclusions reached by a wide range of international organizations, including Amnesty International, Human Rights Watch and the International Commission of Jurists, as regards the prosecution of Catalan independentists and the excessive use of police force to break up peaceful activities that involved voting and the exercise of political rights. A further two points (69 and 70) insist on the harm suffered by the Catalan minority at the hands of the Spanish State, including cutbacks in the freedom of peaceful assembly and association (as defined in the European Convention of Human Rights), and hinderance to participation in public life, as well as the marked rise in hate speech against Catalans in the social and other media.

In an official Spanish document that comes in answer to these accusations (A/HRC/43/47/Add.2), the Spanish government defiantly responded by disputing the term “Catalan minority” and its legitimacy. (It goes as far as to accuse the rapporteur of having a “simplistic approach”, calling the Catalans a “so-called minority” and defining the Catalan Parliament as a “regional body”). It furthermore called for proof of the rise in anti-Catalan hate speech (documentation the U.N. should have provided and inexplicably failed to do) and also insisted that the Catalans, so far tried on charges of “sedition”, have been given a fair trial, having been convicted for acts they committed, not for their opinions or ideology.

However, this severe reprimand by Mr De Varennes comes at an awkward moment for the Spanish institutions. On the one hand, the European Union’s Court of Justice has just issued a ruling (13th March) confirming that Spain’s Supreme Court judge Pablo Llarena –responsible for drawing up the case against the Catalan independentists– failed to respect the right to a proper defence of president Carles Puigdemont and other exiled leaders in November 2017. On two occasions, it rules, he illegally denied their lawyers (Boyé and Cuevillas) access to the pre-trial investigation documents. This in the same week that Geneva press revealed that former King Juan Carlos I –the traditional “guarantor” of Spanish democracy– had received an undeclared Saudi donation of €100M into a Swiss bank account of his. As may be expected, Spain’s majority parties, including governing socialists, refused the opposition’s call for the creation of a parliamentary commission to look into this case. As one socialist minister pointed out, the monarchy in Spain is “inviolable”.

Branko Milanović – The Plight of Late Industrializers: What If Peasants Do Not Want to Move to Cities?

Probably a billion pages have been written about the economic aspects of industrialisation, but too few ask what it meant for peasants on the land who were driven to leave their homes, traditions, and culture […]

The Catalan independence movement has entered a new phase. This is not something that like a clock, which can be set back again. David Whyte is Professor of Socio-legal Studies and Ignasi Bernat is an […]

David Harvey puts his sharp intellect to work unpicking one of the most important parts of Marx’s Capital, dealing with the remarkable story behind the concept of primitive or original accumulation, and how it manifested […]