We are making progress. Whereas the Green New Deal up to now has been discussed in principle, Colin Hines starts working on details. Although he is focussed on his own nation, Britain, this will help anyone considering how a Green New Deal can be implemented. 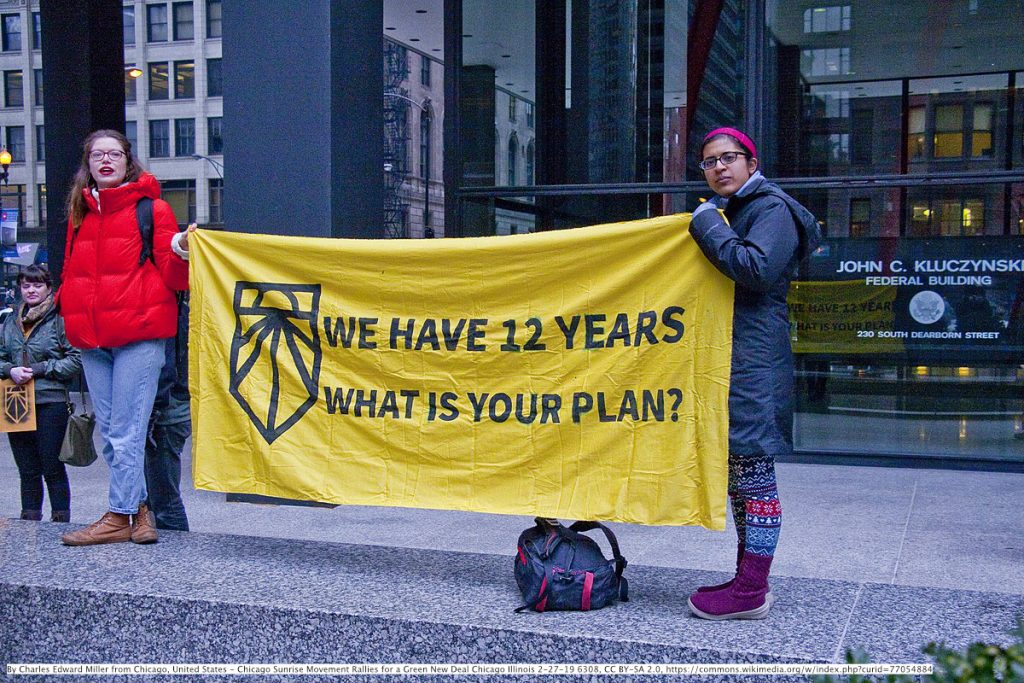 When it became evident that Brexit day would be shifted from April Fools Day to Halloween, the Brexit fog lifted just long enough to allow David Attenborough, Extinction Rebellion, Greta Thunberg and the constant background call in the US and Europe for a Green New Deal to put the climate emergency centre stage in the UK public debate, which was in turn reflected in the results of the European Elections.

The top priority now is to ensure that the momentum behind these demands is maintained and that it results in forcing the necessary Government action. Crucially this will require prioritising an approach that is seen to benefit the majority and not just appeal to those for whom the environment is already their top concern. The UK Green New Deal group has for over a decade campaigned for energy efficiency in all buildings as a major way to gain widespread public support for such measures, since it could provide secure, well paid jobs in every constituency and would tackle fuel poverty.

As well as increasing the range of support to deal with climate heating, the UK Government’s 2050 target must be bought forward. To further these goals it is time to consider a ‘30 by 30’ initiative to ensure that the around 28 million UK dwellings and 2 million commercial and public sector buildings  are made energy efficient by 2030. In the UK there is now a political urgency for such a comprehensive approach to be considered, given the possibility of an Autumn election in the UK and talk of opposition parties forming local alliances. Helpfully our call for a ‘jobs in every constituency’ Green New Deal last year gained the support of opposition parties and so should become a central demand in all election manifestos, given that addressing the climate emergency is now an unavoidable political priority.

This ‘30 by 30’ target could cut carbon emissions by around 40%. It would also have the social advantages of dealing with fuel poverty and requiring a massive multi skilled, training programme resulting in a wide range of long term, well paid jobs, as well as business and investment opportunities in every community. Local democracy could flourish since enacting this huge programme will require consultation and the involvement of the workers and recipients of this ‘30 by 30’ programme.

But where to start?

The ‘Northern Powerhouse’ is a project to boost economic growth in the North of England. It was initiated by the 2010-15 Conservative-Liberal Democrat coalition, and centred on the “Core Cities” of Manchester, Liverpool, Leeds, Sheffield, Hull and Newcastle. This has resulted in half the people living in the North now being governed by mayors with increased but still limited powers and the setting up of Transport for the North with a £70bn investment blueprint.

However this has not been experienced on the ground as a gain for the majority, since the reality of the Government’s austerity programme is that overall public spending for the area has been cut by £3.6 billion between 2009/10 and 2017/18, while the South East and the South West together saw a £4.7 billion rise (in real terms). London also saw a cut in spending, but by far less, at £256 million . In terms of the crucial research and development the Golden Triangle of London, Cambridge and Oxford attracts over half of all research funding – more than £17bn. A mere £0.6bn goes to the north east. Cambridge, with a population of 285,000, has as many private R&D jobs as the whole of the north, with a population of 15 million.

However these trends could be significantly changed were a labour intensive ‘30 by 30’ Green New Deal programme be introduced for the region, making all buildings carbon neutral by 2030. Conveniently this fits in well with the climate emergency calls from the leaders of the Northern Powerhouse’s ‘core cities’ since most already have a 2030 deadline for becoming carbon neutral .

The scope for a comprehensive energy efficiency programme which will both generate a huge range of jobs and improve living conditions for millions in this area is enormous. There are approximately 2,750,000 homes in the north of England suitable for cavity or solid wall insulation and 1,140,000 homes are suitable for loft insulation.  In addition to this there would be huge potential for solar PV on roofs, replacing gas boilers with heat pumps or community heating schemes, battery storage and smart meters.

To act as an inspiring example for the whole country would require spreading the Northern Green New Deal Powerhouse approach to every nook and cranny of the region. In addition to its five major city regions, the area has within it 265 towns, almost 1,000 villages and smaller communities. It also has 29 Universities which could help become the hub of a massive retraining programme for the range of skills required to make all the area’s buildings energy efficient.

E3G’s comprehensive report, “Affordable Warmth, Clean Growth” has already detailed a comprehensive Buildings Energy Infrastructure Programme and dedicated delivery agency to achieve major energy savings and de-carbonise the UK heating supply. It set out an action plan to make all homes energy efficient within 20 years, although this timeline is in the process of being shortened for an update to the report. Achieving this goal will require the adoption of world-leading quality standards for retrofitting and constructing homes, area-based schemes led by local authorities, additional funding sources that won’t raise energy bills and financial incentives to encourage households to take up energy-saving measures.

In terms of what this would mean for the Northern Powerhouse, IPPR North details in its report ‘A Northern Energy Strategy’ a similarly comprehensive programme from the perspective of the resources available and the needs that must be met in the North. This emphasises that its policies would be driven more effectively at a local level, by actors who are trusted, who understand their local housing stock and those that live within it.

Strong national and local political support for such a ’30 by 30’ approach could come from the Northern Powerhouse All-Party Parliamentary Group (APPG) which brings together Northern MPs and Peers with the new Metro Mayors and key leaders from local government, the private and third sectors.

Relevance to European and US Green New Deal Campaigns

There are roughly 300 million homes and other buildings in the European Union and they currently represent almost 40% of total final energy consumption . Therefore making them all carbon neutral and so providing jobs in every community can make a crucial contribution to the growing demands for a European Green New Deal that addresses both environmental and social concerns.

The US Green New Deal has at its heart making every residential and industrial building energy efficient. Given there are around 140 million residential buildings alone in the US this by definition means jobs in every district in the country, both Republican and Democrat. Such a Green New Deal could therefore be the cornerstone of the Democrats’ attempt to beat Donald Trump in 2020.

Why Should This Happen?

The answer to this is climate events and the beginning of the end of austerity. With Europe threatened with ‘hell is coming’ heat waves and a growing Eurozone crisis and international slowdown resulting in a reconsideration of austerity both in the EU  and the IMF , the stage is set for the climate emergency movements demands to be translated into jobs in every community.

Finally there is a timely precedent for such a transformational achievement. Fifty years ago this month the US put a man on the moon within a decade of President Kennedy’s original call to do so. This time the priority must be to save the planet, not to leave it.

Len McCluskey – Britain: Young Workers know they’re being ripped off – and that unions are the answer

Last weeks global food strikes in Britain show young workers get what trade unionism is about – and bringing are new forms of digital organisation into play. Len McCluskey is General Secretary of Unite, Britain’s […]

John Weeks has been continually analysing the development of Brexit since the referendum, which we have been posting. Here is his latest update. John Weeks is Professor Emeritus, School of Oriental & African Studies, University […]