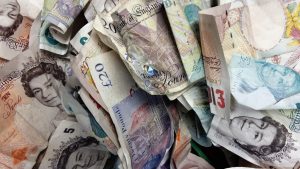 When I do one of my diatribes about how our protectionist barriers allow U.S. doctors to earn twice as much as doctors in other wealthy countries, I invariably get complaints from doctors and their friends asking why I don’t go after the really big bucks people on Wall Street. The answer of course is that I do, but the bloated paychecks on Wall Street are not a reason to pay an extra $100 billion a year ($750 per household) to doctors in the United States. But it is true that I haven’t beaten up on the financial sector for a while, and with Biden now putting together his administration, this would be a great time to take a few shots.

First, we need some important background. Finance is an intermediate good, like trucking. It does not directly provide value to people like housing or health care. Its value to the economy is allocating capital and facilitating transactions so that the sectors that do provide value are as efficient as possible.

However, rather than getting smaller and more efficient, the financial sector has expanded hugely over the last four decades. This is seen most clearly in the narrow commodities and securities trading sector, which was less than 0.4 percent of GDP in the mid-seventies and is now more than 2 percent of GDP ($400 billion a year). Other parts of finance have exploded also. We now spend over $250 billion a year (1.2 percent of GDP) on the administration of the health insurance industry, $100 billion on life insurance (0.5 percent of GDP), and hundreds of billions more on other financial services.

In addition to being a drain on the rest of the economy, the financial industry is the source of many of the country’s greatest fortunes. Folks who are concerned about inequality need to have their eyes squarely focused on the sector.

I have long been a huge fan of financial transactions taxes (FTT) as a great way to reduce the size of the sector and raise a large amount of money for the government.  By my calculations, a FTT could raise an amount of revenue roughly equal to 0.6 percent of GDP or $130 billion a year in the 2021 economy.

This revenue would come almost entirely at the expense of the financial industry. This needs a bit of explaining since the industry spokespeople have worked so hard to create confusion on this issue. It is true that a tax will likely be mostly passed on to investors in the form of higher trading costs. If the tax on stock trades is 0.2 percent, the cost of trading stock is likely to rise by close to 0.2 percentage points.

However, if we want to look at the costs actually borne by investors, we have to look at a fuller picture. Suppose that an increase in trading costs of 0.2 percentage points would double the cost of trading. There is a large amount of research that shows that trading volume would decline by roughly the same percentage as the increase in costs. (in other words, the elasticity of trading is close to 1.0.)

Who pays the tax in that story? Well, the industry pays it in the form of reduced revenue. The money that investors had been paying to the industry to carry through trades is instead going to the government as tax revenue.

What about the reduction in trading volume, won’t investors be worse off with fewer trades? This is the dirty secret that the industry doesn’t want people to know about. In general, investors will not be worse off if their portfolio turned over less frequently.

The logic here is straightforward. Every trade has a winner and a loser. There are a small number of very astute investors who are disproportionately on the winning side of trades, but the vast majority of investment managers are not that skilled. On average they win half the time and they lose half the time.

This means that on average if they reduced their trading, the direct returns on the portfolio would not suffer, and investors would save from lower fees. The losers of course are the people in the financial industry, who get money from trading.

Cutting trading volume in half means cutting their revenue in half. When we realize who is actually paying the tax, it is no longer a surprise that the financial industry screams bloody murder when anyone talks about a financial transactions tax. This is money out of their pockets and they will fight like crazy to protect their income. And, since they are very rich, we can expect a serious fight.

As a practical matter, a financial transactions tax would face an enormous uphill fight in the Senate, even if the Democrats can somehow win the two seats in Georgia that will give them control. But there are other things that can be done to attack the inefficiencies and great fortunes in the sector.

Many of the richest people in the country have made their fortunes in private equity. While the industry tries to sell a heroic image of itself as being turn around experts that give failing companies the capital and management skills they need to be successful, more typically they make their money by financial engineering, tax gaming, laying off workers, and pushing down wages. My colleagues, Eileen Appelbaum and Eleanor Eagon, have comprised a Day One agenda of measures the Biden administration can do through executive action to rein in these abuses.

But in addition to measures to rein in abusive practices, there is another side of the equation that is worth pursuing. Private equity actually has not been providing good returns to investors in recent years. While private equity funds did provide outsized returns in the 1980s and 1990s, that has not been the case since 2006.

This means that, while the general partners who run private equity firms might be getting very rich, the limited partners who put up the money are doing no better on average than if they just put their money into a stock index. And, they would face much less risk.

While we can’t keep rich people from blowing their money on bad investments, much of the money for private equity comes from pension funds and especially from public sector pension funds. In most cases, it is not possible to find the terms of the contracts that private equity companies sign with pension funds. Their standard line is that they are giving the pension fund a good deal. If they had to disclose their terms, they would have to give the same deal to everyone else, and then it wouldn’t be profitable.

Of course, the idea that everyone else is being ripped off, except our favored pension fund, is nonsense on its face. Private equity companies want their terms kept secret so that it is not clear how much money they are taking from the pension funds that invest with them.

This practice suggests a very simple and obvious reform: require full disclosure of terms. States could require that contract terms with every private equity company (for that matter any investment manager) be posted in full on their website, so that any reporter, researcher, or individual could quickly see the terms the fund had negotiated.

Anyhow, a push for full transparency on public pension fund investments should in principle be a manageable lift. After all, it might be hard for Republicans to claim that insisting the public be able to know where public money is going is “socialism.”

Needless to say, both Republican and Democratic politicians receive large campaign contributions from private equity funds and other investment managers. They will fight like crazy to block disclosure requirements at the state or federal level. But this seems like good grounds on which to fight a battle.

The West African Economic and Monetary Union, WAEMU, a colonial creature by France, but now dominated by both France and the European Union through financialization, has become financially dependent and saddled with socio-economic challenges it […]

Dean Baker – An Economic Survival Package, not a Stimulus Package

Although about the USA the economic questions are the same as in the EU – and the policies are not that different. Dean Baker is a Senior Economist at the Center for Economic and Policy […]

Andrew Baker – The Finance Curse research agenda: what we learned

A finance curse research agenda involves forensic dissection of financial dysfunction and pathology, helping to illuminate what needs to be put right Andrew Baker is a Faculty Professorial Fellow, SPERI This blog was first posted […]